The Nobel Assembly at the Karolinska Institute announced today that William G. Kaelin, Jr., a Howard Hughes Medical Institute (HHMI) Investigator at Dana-Farber Cancer Institute, Sir Peter J. Ratcliffe of Oxford University and the Francis Crick Institute, and Gregg L. Semenza of Johns Hopkins University are the recipients of the 2019 Nobel Prize in Physiology or Medicine for their discoveries of how cells sense and adapt to oxygen availability. 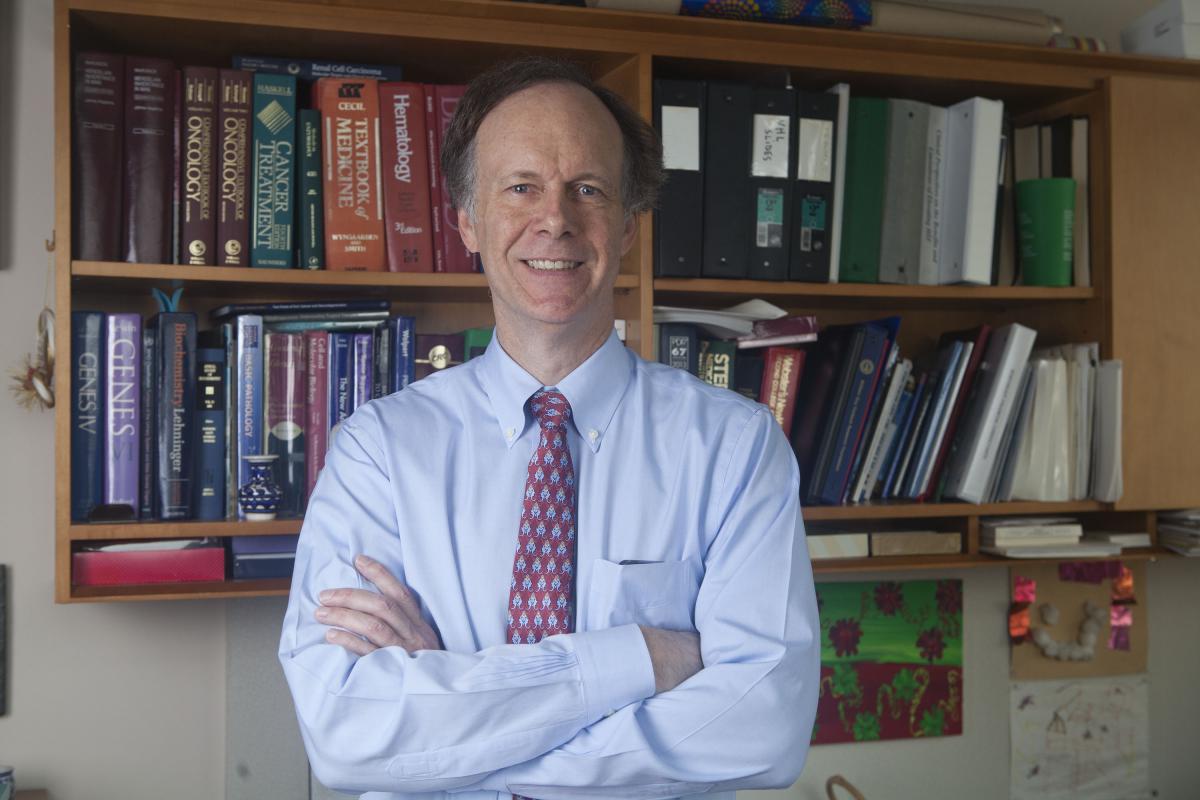 The Nobel Assembly, which selects Nobel laureates, announced the news today during a press conference at the Karolinska Institute near Stockholm, Sweden.

The three physician-scientists found a molecular switch that regulates how our cells adapt when oxygen levels drop. This switch plays a critical role in exercise and in disease, including anemia, cancer, stroke, infection, and heart attack, said Randall Johnson, a professor at the Karolinska Institute, and a member of the Nobel Assembly.

“These fundamental findings have greatly increased our understanding of how the body adapts to change,” Johnson said. “Applications of these findings are already beginning to affect the way medicine is practiced.”

When reached today by an early morning phone call from Stockholm, Kaelin “was really happy – almost speechless,” said Thomas Perlmann, the Secretary-General for the Nobel Assembly and Nobel Committee.

Kaelin remembers waking at 2:30 am after having a vivid dream that he didn’t get a call from the Nobel Committee. After he went back to sleep, the call actually did come – a couple of hours later – and he wondered if he was dreaming or awake. “At that point it was so surreal. I had this out-of-body feeling of great appreciation,” he said in a press conference held at Dana-Farber Cancer Institute.

BREAKING NEWS:
The 2019 #NobelPrize in Physiology or Medicine has been awarded jointly to William G. Kaelin Jr, Sir Peter J. Ratcliffe and Gregg L. Semenza “for their discoveries of how cells sense and adapt to oxygen availability.” pic.twitter.com/6m2LJclOoL

Kaelin, who became an HHMI Investigator at Dana-Farber Cancer Institute in 1998, was born in New York in 1957. In 1992, Kaelin set up his own lab, and, looking for a project, read about the identification of the gene for von Hippel-Lindau (VHL) disease. Patients with this hereditary cancer may develop tumors in the kidneys, adrenal glands, or pancreas. And they often acquire tumors in the central nervous system that look like nests of blood vessels.

Whenever Kaelin had encountered this rare condition, he had wondered if it involved an abnormal response to normal oxygen levels. “I thought this would be sort of a Rosetta Stone for studying oxygen sensing,” he said.

As well as growing lots of blood vessels, the tumors sometimes produce erythropoietin, which stimulates red cell production. Thus, they behave like tissue that is short of oxygen.

"I thought [von Hippel-Lindau disease] would be sort of a Rosetta Stone for studying oxygen sensing."

Kaelin discovered that when oxygen levels are normal, the VHL protein helps mark another cellular protein, called HIF, for destruction. When oxygen levels fall, HIF is allowed to persist, so it can restore a healthy supply of oxygen by promoting blood vessel growth and stimulating erythropoietin production. But how does VHL know that oxygen is scarce and it should leave HIF alone?

For many years, scientists had been trying to understand how cells sense and adapt to changing oxygen levels. Kaelin's group discovered that when oxygen is present, HIF acquires a hydroxyl group (-OH). When there isn't enough oxygen to provide the oxygen atom in this group, HIF is not hydroxylated. Moreover, oxygen availability determines the efficiency of the hydroxylating enzyme. So HIF remains unadorned when oxygen is scarce, escapes being tagged by VHL (because the hydroxyl group serves as the binding signal), and survives to initiate blood vessel growth.

This discovery was surprising because hydroxylation had never been identified as a cellular signaling mechanism. But since Kaelin's finding was published in the journal Science in 2001, National Cancer Institute investigators have identified several genes in the human genome that are predicted to encode protein hydroxylases.

Kaelin, Ratcliffe, and Semenza’s work has led to the development of new drugs that tinker with how the body senses oxygen. For people with anemia, or a low red blood cell count, these drugs could be critical. They trick the body into thinking it’s at the top of Mount Everest – where oxygen is low, which triggers the production of more red blood cells, Kaelin said.

Kaelin didn’t set out to treat anemia. “I’m a cancer biologist and a cancer physician…” but “that’s the way science works,” he said. His team started with an unusual disease, and an interesting question they hoped could become important. Their findings revealed something much broader – an oxygen-sensing pathway used by every multicellular organism on the planet.

The results highlight the importance of allowing scientists the flexibility to follow their own scientific road, even if they can’t predict where it will take them, he said. Instead of narrowly funding specific projects, “I’d rather we take talented, curious people and say, ‘You have an interesting problem – and your nose tells you there’s something to be learned? Go for it,’” he said.

The three winners will share the 9 million kroner (roughly $1 million) for this year’s prize.

Since 1978, more than two dozen scientists supported by HHMI have won Nobel prizes in Chemistry or Physiology or Medicine. HHMI’s most recent winner was Michael Rosbash, who, in 2017, shared the Physiology or Medicine prize with Jeffrey C. Hall and Michael W. Young for discoveries of molecular mechanisms controlling the circadian rhythm.