The Nobel Assembly at the Karolinska Institute announced today that Michael Rosbash, a Howard Hughes Medical Institute (HHMI) investigator at Brandeis University, Jeffrey C. Hall of Brandeis University and Michael W. Young of the Rockefeller University are the recipients of the 2017 Nobel Prize in Physiology or Medicine for their discoveries of molecular mechanisms controlling the circadian rhythm. 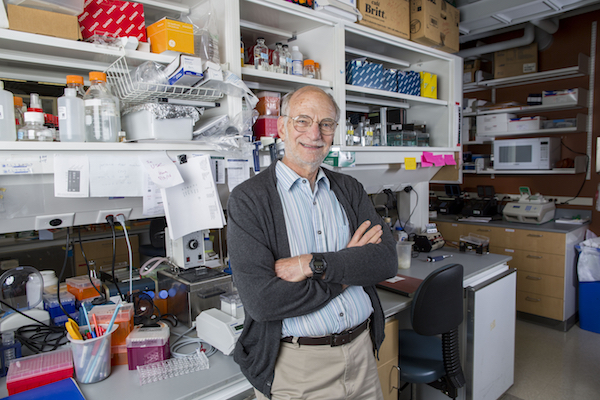 The Nobel Assembly at the Karolinska Institute announced today that Michael Rosbash, a Howard Hughes Medical Institute (HHMI) investigator at Brandeis University, Jeffrey C. Hall of Brandeis University and Michael W. Young of the Rockefeller University are the recipients of the 2017 Nobel Prize in Physiology or Medicine for their discoveries of molecular mechanisms controlling the circadian rhythm.

Rosbash, who became an HHMI investigator at Brandeis University in 1989, Hall, and Young were highlighted for discoveries that have revealed the genetic underpinnings of the circadian clock. Circadian clocks are active throughout the body’s cells, where they use a common genetic mechanism to control the rhythmic activities of various tissues.

“Michael has made major contributions to unraveling how the circadian clock works,” said HHMI President Erin O’Shea. “Over the course of his career, he has maintained an infectious enthusiasm for science and has demonstrated a boldness in questioning and challenging dogma and established views.”

Using fruit flies as a model organism, this year's Nobel laureates isolated a gene that controls the normal daily biological rhythm. They showed that this gene encodes a protein that accumulates in the cell during the night, and is then degraded during the day. Subsequently, they identified additional protein components of this machinery, exposing the mechanism governing the self-sustaining clockwork inside the cell. We now recognize that biological clocks function by the same principles in cells of other multicellular organisms, including humans.

Young, who was an HHMI investigator at the Rockefeller University from 1987-1996, Rosbash and Hall cloned circadian genes from the fruit fly Drosophila melanogaster. They established that the genes’ expression cycled over 24 hours using a feedback system: in the flies, genes called timeless and period produced proteins that paired up, traveled to cell nuclei, and turned off the very genes that encoded them. Interestingly, the mammalian CLOCK and BMAL1 proteins can regulate the fly period and timeless genes, and this led to the concurrent discovery of the fly versions of the Clock and Bmal1 genes by HHMI Investigator Joseph Takahashi at the University of Texas Southwestern Medical Center and Steve Kay of the University of Southern California and by Rosbash and Hall. Young then went on to discover mutants that made this cycle last longer or shorter than the typical day length, and Rosbash and Hall pinpointed and cloned a host of other genes that influenced the clock.

Most scientists spend their careers exploring the depths of one specialized field. For more than 30 years, Michael Rosbash divided his time between two and made significant contributions to both. His studies of the metabolism and processing of RNA have uncovered some of the fundamental steps by which this key molecule carries out the protein-building instructions written in genes. In separate work, Rosbash also has helped to reveal the molecular basis of circadian rhythms, the built-in 24-hour biological clock that regulates sleep and wakefulness, activity and rest, hormone levels, body temperature, metabolism and many other important functions.

Using the fruit fly Drosophila as a model, he has identified genes and proteins involved in regulating the clock and proposed a mechanism for the way it works. Rosbash's discoveries apply not only to insects but also to humans and other mammals, and they ultimately could lead to the development of drugs to treat jet lag, insomnia as well as other sleep syndromes, and even metabolic disorders. All these processes are regulated by circadian rhythms.

His interest in circadian rhythms was sparked by a friendship. After Rosbash came to Brandeis in 1974 as an assistant professor, he became increasingly interested in a subject with far-reaching consequences: the influence of genes on behavior. This interest may have remained dormant without meeting another new scientist on the faculty, Jeffrey Hall. Hall had trained under the late Seymour Benzer, an esteemed scientist at the California Institute of Technology. He was the first to show that genes dictate the day-night cycle of activity in fruit flies when his laboratory identified a mutation in the Drosophila gene period. “Jeff told me about the history of the research, the people, and the science, and we decided to collaborate,” Rosbash explains. "The personal friendship was really the driving force behind the beginning of this work."

In 1984, Rosbash and Hall cloned the period gene. Several years later, they proposed a mechanism by which a molecular 24-hour clock might work — a transcriptional negative-feedback loop. Their model still holds up, despite discoveries of additional circadian rhythm genes, and it applies to humans as well as fruit flies. In essence, the genes that are part of this loop activate the production of key proteins until a critical activity of each accumulates and turns off transcription. Phosphorylation as well as light regulation of these key proteins is also important to the timing mechanism. Although many details remain to be worked out, "there is an emerging picture of feedback mechanisms that regulate the levels and activity of key circadian proteins, which ebb and flow in harmony with daily light and dark cycles," Rosbash says.

Over the years, Rosbash and Hall identified other significant circadian genes and the function of their proteins, with the goal of understanding how the various pieces of the clock fit together. Rosbash's group has also uncovered dual body clocks in the brain of fruit flies that independently govern bursts of morning and evening activity. The clock that initiates the morning activity, however, also helps to reset the second clock that regulates movement in the evening. Rosbash speculates that mammals possess similar dual circadian clocks. The integration of multiple clocks is probably important not only for maintaining a precise 24-hour cycle but also for adapting physiology to seasonal changes in day length, at least in animals.