Uncovering the Neural Basis for Hypothetical Thinking in Rats

As a rat approaches a maze juncture, neural activity rapidly cycles between two sets of cells. The discovery suggests the rodents are envisioning turning left or right. A similar phenomenon may underlie how humans make decisions.

As a rat moves from the center of a maze into its left pathway (right panel), neurons called place cells (shown in different colors) are active. Each vertical line (left) and dot (right) corresponds to an activity spike from a particular cell. Credit: Tom Davidson, Anna Gillespie, Loren Frank

Coffee or tea? Sweater or coat? These decisions seem simple, but they require you to consider how the future might play out.

By recording brain activity in rats running through a maze, scientists now have a better idea how this sort of hypothetical thinking takes place. In a brain region called the hippocampus, neural activity can rapidly alternate between two sets of cells, Howard Hughes Medical Institute Investigator Loren Frank and colleagues report on January 30, 2020, in the journal Cell.

This neural pattern suggests the rodents considered competing scenarios before turning one way or the other, Frank says. He suspects something similar happens in the human brain.

“We make and use predictions all the time, even if we don’t think about it consciously,” says Frank, a neuroscientist at the University of California, San Francisco. The neural cycling his team discovered provides a mechanism to support the kind of quick, flexible thinking that is a hallmark of daily life, he says. It may also help scientists understand other facets of the brain, including dysfunctions linked to mental illness.

“The brain constantly shifts between hypothetical scenarios and ‘the here and now.’ We think that’s how the brain generates a menu of options from which to choose.”

Frank and colleagues examined neurons within the hippocampus, a center for memory and navigation. A unique set of these neurons, called “place cells,” fire when a rat occupies a specific location. Previous studies have shown that groups of place cells can also represent possible future scenarios. They can switch on, for instance, before a rat sets out toward a location.

Until now, scientists had only seen this type of neural activity unfold intermittently and relatively slowly, including at times when rats pause and scan their options. Frank’s team’s new experiments reveal something different: a rapid, continuous cycling between possibilities. This cycling could happen eight times a second, suggesting a faster, more flexible process better suited to making decisions on the fly. 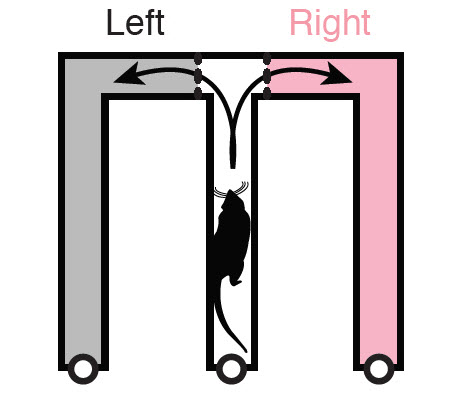 Using treats like sweetened evaporated milk, Frank and his colleagues trained the rats to visit the arms of a maze in a set sequence. As the rats approached a maze juncture, and they needed to choose between turning right or left, the activity of place cells linked to each option increased. These cells took turns firing, as the rats considered one direction, then the other, and so on.

Their place cells juggled other considerations too, cycling between the animals’ current heading and the possibility of moving backward, for instance. The brain constantly shifts between hypothetical scenarios and “the here and now,” Frank says. “We think that’s how the brain generates a menu of options from which to choose.”

Although such a pattern of neural cycling has not yet been observed in humans, he believes our brains may function in a similar way.

“What’s particularly exciting about this study is that it adds to evidence that place cells take part in higher-level cognitive function,” says Elizabeth Buffalo, a neuroscientist at the University of Washington who was not involved in the work. Identifying the human or monkey version of this phenomenon is something that we are working towards, she says. Previous research suggests a more complex spatial system is at work in brains like ours.

Were similar cycling to turn up in humans, it could help to explain how our brains stay organized, Frank says. Confining present reality and hypotheticals to two discrete parts of the brain keeps them neatly separated. “When you get confused about what’s real and what’s a possibility, that’s when you’re in trouble, ” he says. “That’s called a delusion.” He notes that the connection to mental illness is highly speculative. But, he adds, “this work at least it gives us a framework to start thinking about those kinds of questions.”