The new coronavirus invades cells that sport certain molecules on their surfaces. A network of researchers realized they already had the data to identify these cells.

Before it can sicken people, the new coronavirus must first sneak into their cells. But not any cell will do. The virus can enter only those with a certain combination of molecules on their surfaces.

Earlier this year, a group of scientists from across the Human Cell Atlas project realized they could look for these molecules on cells throughout the body — using data they had already collected from healthy people.

With information from more than 4 million human cells from people of many different ages, the scientists identified places the virus, called SARS-CoV-2, may invade the body. Their findings suggest that the virus may be able to enter more kinds of cells than previously thought. The work also offers hints about two central SARS-CoV-2 questions: How the virus can harm so many different organs and why some people are more vulnerable to infection. The team posted a preliminary analysis on bioRxiv on April 20, 2020.

A massive collaboration of nearly 200 scientists made this effort possible, says Aviv Regev, one of the collaborators and a Howard Hughes Medical Institute Investigator at the Massachusetts Institute of Technology. “By rallying together and sharing data collected for other purposes, we could draw conclusions we could not have gotten any other way,” she says. “This happened because of SARS-CoV-2. And the Human Cell Atlas network helped us pivot quickly. Science normally doesn’t work like this.”

Regev, like most of the scientists involved in the project, is part of the Human Cell Atlas. Starting in 2016, the Atlas brought together biologists from around the world to thoroughly describe every cell type in the body. Doing so required them to collect and share data.

As COVID-19, the illness caused by the virus, spread, lung-cell researchers decided to see what they could learn from information they had at hand, says Martijn Nawijn, an Atlas member who studies chronic respiratory diseases at the University of Groningen in the Netherlands. “We had already been collaborating, and the infrastructure was already there, so we could respond quickly,” he says. The effort rapidly expanded to include additional parts of the body.

The researchers had previously collected RNA expression levels from individual cells using a technique called single cell RNA-Seq. This data let them identify the expression of genes that encode molecules on the cells’ surfaces – a crucial bit of information for scientists studying SARS-CoV-2. The virus uses two such molecules to enter cells: a receptor called ACE2 and an enzyme known as a protease.

The scientists wanted to survey the body for cells with both molecules; these cells are potentially vulnerable to SARS-CoV-2 infection. Each lab typically had single cell RNA-seq data from only a relatively small number of individuals, so groups of scientists got together to collaborate. The team’s analysis currently incorporates 117 datasets, including 22 for the lung and airways, although an additional 10 datasets are being added, Nawijn says.

So far, the collaboration has yielded four papers. One, published April 23 in Nature Medicine, used more limited data to pinpoint certain nasal cells as likely sites for viral infection and transmission. The bioRxiv paper, which has not yet gone through the scientific vetting process known as peer review, sketches out a more comprehensive picture. 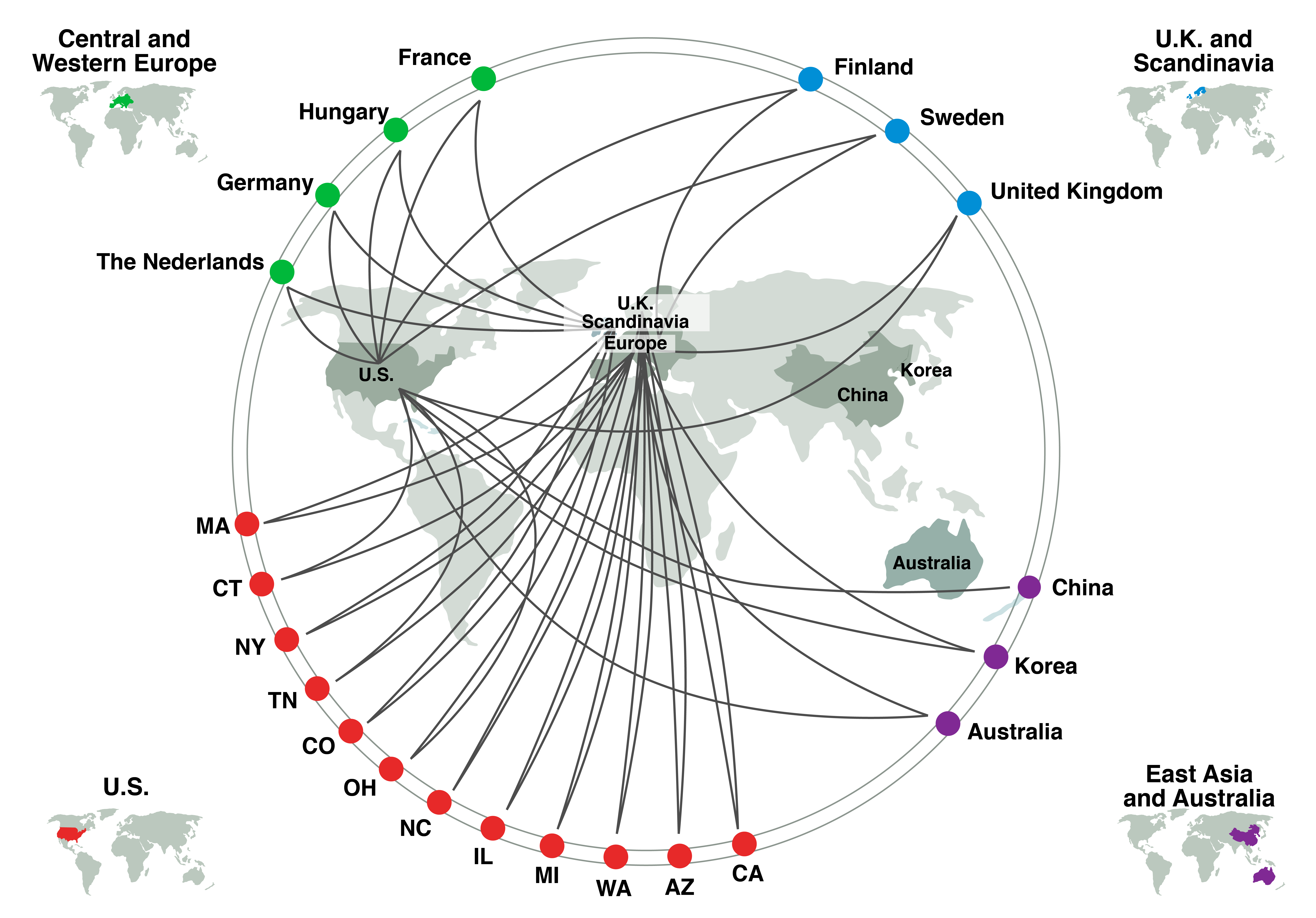 Clues to a complex illness

COVID-19 kills many patients by severely damaging their lungs, but it has become increasingly clear that the disease causes injury elsewhere, too, and that may also lead to death. Even patients with mild cases can experience loss of smell and taste, sometimes diarrhea, and rarely skin lesions. Meanwhile, patients with severe illness can experience heart and kidney failure, spontaneous blood clots, stroke, and even seizures. No one fully understands why, but the team’s findings could help.

“The data has good clues to several of COVID-19’s conundrums, including the wide-ranging organ involvement seen in our patients,” says Naftali Kaminski, a physician scientist and Atlas member. Kaminski is the chief of pulmonary, critical care and sleep medicine at Yale University Medical School, and his physician faculty are at the forefront of caring for critically ill patients with COVID-19. In the analysis, for example, the key entry molecules turned up in tissues across the body, from cells lining the lung, to cells in the heart, brain, and kidney. This potentially explains how, if kept unchecked, the virus spreads and damages the body organ by organ.

The new study also offers hints about the immune response’s contribution to the disease. Doctors have noted that COVID-19 can send the immune system into overdrive, prompting harm to the body. In fact, cells with the viral entry molecules also expressed immune genes poised for action, the scientists found. These genes could potentially contribute to the body’s overreaction, says Kaminski.

Other distinct patterns have emerged in the pandemic: the illness more severely affects men, older people, and smokers. The team wanted to see if these differences showed up at the cellular level. Their comparisons revealed that the two molecules are generally present at higher levels in men, and levels tend to increase with age. The effect of smoking needs further study, they say.

The study’s conclusions come with a major caveat, Regev points out. Because the analysis relied on cells from healthy people, those cells identified as potentially vulnerable to SARS-CoV-2 are only predictions, she says. To find out what really happens during infection, Atlas scientists are now examining cells from COVID-19 patients.

Still, Regev adds, this study suggests that across the body’s cells, “there is widespread potential for SARS-CoV-2 infection.”