A new type of DNA editing enzyme, developed in HHMI Investigator David Liu’s lab, lets scientists directly and permanently change single base pairs of DNA from A•T to G•C. The process could one day enable precise DNA surgery to correct mutations that cause human diseases. 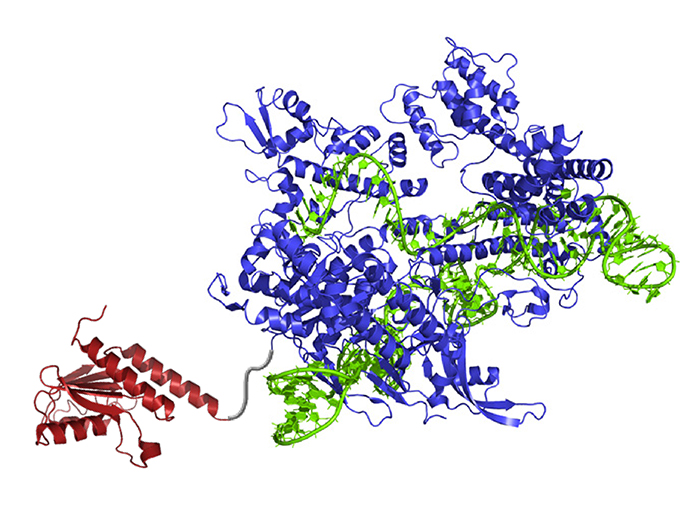 DNA editing just got a sharp, new pencil. Researchers have built an enzyme that can perform a previously impossible DNA swap, directly changing the DNA base pair from an A•T to a G•C. The new enzyme, known as a base editor, may one day enable genome surgery that erases harmful mutations and writes in helpful ones, Howard Hughes Medical Institute (HHMI) Investigator David Liu and colleagues report October 25, 2017, in the journal Nature.

The new system is a “really exciting addition to the genome engineering toolbox,” says Feng Zhang, an HHMI-Simons faculty scholar and molecular biologist at the Broad Institute of MIT and Harvard, who was not involved in the study. “It's a great example of how we can harness natural enzymes and processes to accelerate scientific research.”

Some genome editing tools, such as CRISPR/Cas9, cut both strands of DNA and rely on the cell’s own molecular machinery to fill in the gap with the desired DNA sequence. Base editors are, in a sense, more precise tools. “CRISPR is like scissors, and base editors are like pencils,” says Liu, a chemical and molecular biologist at Harvard University and the Broad Institute.

Those pencils can rewrite the individual chemical units of DNA, known as bases. Each base on one strand of DNA joins its partner base on an opposing strand, so that the base adenine pairs with thymine (A•T), and guanine pairs with cytosine (G•C). Last year, Liu and colleagues described a base editor that could change C•G base pairs into T•A. But researchers didn’t have the ability to convert A•T to G•C, until now.

Going in, Liu and his team knew that the project was risky, because the first step involved creating an enzyme that didn’t yet exist. Postdoctoral researcher Nicole Gaudelli took on the challenge, relying in part on evolution to create an enzyme that could do the job. Gaudelli started with an enzyme called TadA that’s able to convert adenine to a molecule called inosine (which cells treat as guanine), but in transfer RNA rather than in DNA. She made larger libraries of TadA mutants into bacterial cells and required them to convert A to inosine in antibiotic resistance genes in order to survive in the presence of antibiotics. Surviving bacteria encoded TadA mutations that imparted the ability to perform the adenine-to-inosine conversion on DNA.

This evolution in the lab paid off. Soon enough, the researchers saw that some bacterial colonies were able to fix their own mutations with chemical surgery and survive the antibiotic challenge. Along with other tweaks, the researchers attached the enzyme to a molecule called Cas9 nickase. That add-on allows the base editor to find the right spot to cut along a DNA strand and snip the opposing strand of DNA ─ a nick that prompts the cell to insert the correct partner base pair to match the new one, thereby completing the swap of A•T to G•C.

Along with several related enzymes, the most tricked-out version, called ABE7.10, is an efficient chemical surgeon, turning A•T into G•C in both human and bacterial genomes. The enzyme operates with greater than 50 percent efficiency and few, if any, by-products such as undesired mutations.

Mutations in which a G•C mutates into an A•T account for nearly half of the roughly 32,000 single point mutations associated with human diseases. Experiments in Liu's study hint at the promise of the new genome pencil. ABE7.10 reversed a G-to-A mutation associated with a genetic iron-storage disease known as hemochromatosis in cells taken from patients. In a different experiment, ABE7.10 added a mutation that restored the function of a hemoglobin gene in human cells. That mutation is known to confer protection against blood diseases including sickle cell anemia.

The results are an early step. “We are hard at work trying to translate base editing technology into human therapeutics,” Liu says, but many hurdles remain. Safety, efficiency, and base editor delivery methods still need to be better understood before base editing can be used to tweak the human genome. “Having a machine that can make the change you want to make is only the start,” Liu says. “You still need to do all this other work, but having the machine really helps.”