Stem cells that make blood cells in fish flourish in the shade provided by a newly discovered cellular “umbrella” that keeps them safe from UV damage.

The results also hint at how human marrow came to be sequestered inside light-blocking bones, says study coauthor and Howard Hughes Medical Institute (HHMI) Investigator Leonard Zon. Figuring out the details of this protection has implications for human diseases that arise when marrow cells malfunction.

“If you could better protect these fundamental cells, they wouldn’t acquire as much damage,” says Zon, a stem cell biologist at Boston Children’s Hospital and Harvard University. Because these cells are responsible for churning out new blood cells, damage to them often means damage to the entire body.

In humans and other mammals, blood-cell-producing stem cells are tucked deep inside bones. In fish, they reside in the kidney. While scrutinizing zebrafish larvae, Harvard postdoctoral researcher Friedrich Kapp, now at the Children’s Hospital in Freiburg, Germany, noticed a swath of dark cells hovering just above the fish’s kidney. These cells were melanocytes, the same pigmented cells responsible for sunbathers’ summer tans. 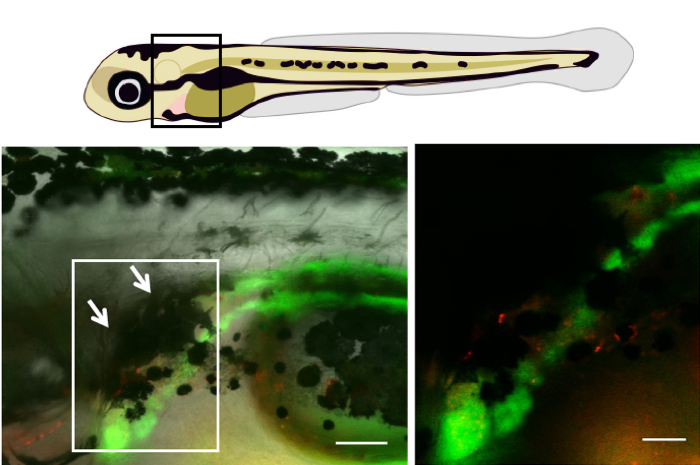 Melanocytes’ dark coloring, as well as their perch just above the stem cells, hinted that they could form an opaque shield – or umbrella – that would protect stem cell DNA against the sun’s UV radiation. Sunlight scrambles DNA in a way that can damage molecules, which researchers can detect in the lab.

Zon’s team performed a series of experiments to study these umbrellas using mutant zebrafish larvae lacking melanocytes. The researchers shined UV light on both normal and mutant larvae. After UV treatment, mutant zebrafish had more DNA damage in kidney cells than normal zebrafish, the team found. And UVB radiation, the main sunburn culprit, seemed to kill stem cells in the kidneys of pigmentless fish. With fewer stem cells, levels of mature blood cells also dropped. The results all pointed to one thing, Zon says: that the melanocyte umbrella is an important stem cell protector.

A final experiment – “probably the best experiment we’ve ever done,” Zon says – convinced the researchers that their idea was right. The scientists flipped the fish – and their umbrellas – upside down. Anesthetized zebrafish larvae float belly-up, a position that allows UV light coming from above to hit the stem cells. In these upside down fish, UV light reduced kidney stem cell numbers to levels seen in fish lacking melanocyte umbrellas altogether, the researchers discovered. The umbrella must be between the sun and the stem cells to work, Zon says: “There’s definitely a directionality to the protection.”

The results highlight the importance of thinking about an animal’s life outside of the lab, Zon says. Fish born and raised in the artificial confines of a laboratory have no need for UV protection. But wild zebrafish live in rice paddies and small, clear pools of water – places where sunlight can easily penetrate.

Other fish, including catfish, sticklebacks, sunfish, and sturgeon, also have melanocyte umbrellas, the researchers found, as did an evolutionarily ancient jawless vertebrate, the sea lamprey. So do certain aquatic frogs. But in the rainforest-dwelling dyeing poison frog, stem cells move from an umbrella-covered spot in the kidney to bone marrow as the frog develops. The dark interior of bones also provides these cells with protection.

Zon’s team still doesn’t know the range of species that use these umbrellas – but they’re on the hunt for more. He and his colleagues tried to look at fish from the deep sea – a pitch-black location that wouldn’t require protection from UV light. “We got one bottom-dweller, but it was mush by the time we brought it up,” he says.

Zon plans to revisit the ocean floor, and to evaluate if the umbrella is present in cavefish. He’d also like to find out whether animals have devised other tricks to thwart the sun.