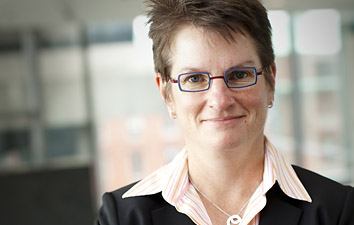 A member of both the National Academy of Sciences and the American Academy of Arts and Sciences, O’Shea is regarded as a leader in the fields of gene regulation, signal transduction, and systems biology. Her research focuses on the way cells sense changes in their environment and respond appropriately, work that has implications for understanding cancer and other diseases.

For the last seven years, O’Shea has served as Director of the Harvard Faculty of Arts and Sciences Center for Systems Biology, an interdisciplinary research center that brings together people from the physical and life sciences to solve problems in biology. In addition, O’Shea is the Paul C. Mangelsdorf Professor of Molecular and Cellular Biology and Chemistry and Chemical Biology at Harvard. She was recruited to Harvard in 2005 from the University of California, San Francisco (UCSF), where she had been an HHMI investigator since 2000.

I see opportunities to identify and support great scientists, to develop and test programs that can serve as models which can be expanded and adopted by others, and to support the development and dissemination of transformative technologies.

“HHMI scientists are among the most creative and accomplished biomedical researchers in the world. Erin’s passion for science, her scholarship, her breadth of scientific interests, and her exceptional skills as a mentor and teacher make her the ideal person to lead our scientific programs,” said HHMI President Robert Tjian, Ph.D., in making the announcement.

O’Shea will lead the Institute’s flagship HHMI Investigator Program, in which leading scientists and their staff conduct research in HHMI laboratories across the United States. At HHMI, she will oversee a broad scientific portfolio, which includes programs that support early career scientists in the United States and abroad, and initiatives that foster innovative, collaborative research. O’Shea will also be responsible for identifying new opportunities that capitalize on the Institute's expertise in biomedical research and science education.

“I was attracted to this position because it provides an opportunity to have a positive and lasting influence on research on the national and international level, as well as to work with colleagues to elevate the importance and quality of science education,” said O’Shea. “I see opportunities to identify and support great scientists, to develop and test programs that can serve as models which can be expanded and adopted by others, and to support the development and dissemination of transformative technologies.”

O’Shea received her undergraduate degree in biochemistry from Smith College and her Ph.D. degree in chemistry from the Massachusetts Institute of Technology, for work done with Peter Kim, who is now president of Merck Research Laboratories. She carried out postdoctoral research with Robert Tjian at the University of California, Berkeley, and with the late Ira Herskowitz at UCSF.

Her honors include the National Academy of Sciences Award in Molecular Biology, a David and Lucile Packard Foundation Fellowship, a Presidential Faculty Fellow Award, the American Society for Cell Biology–Promega Early Career Life Science Award, and the Irving Sigal Young Investigator Award from the Protein Society.

O’Shea will continue to maintain her lab at Harvard, where she conducts research on several broad areas: understanding how regulatory networks encode and decode information to control the production of genes; and investigating the function and mechanism of oscillation of a three-protein circadian clock found in bacteria. In a new project, she is studying the mechanism of drug action, making use of a human cell line amenable to loss-of-function genetic approaches.

O’Shea succeeds Jack E. Dixon, Ph.D., who has led HHMI’s scientific programs since 2007. In 2012, Dixon announced his intention to retire as vice president and chief scientific officer. Dixon will return to the University of California, San Diego in 2013 to continue his longstanding research on protein tyrosine phosphatases—biochemical “master control switches” that regulate much of the activity in living cells.

About the Howard Hughes Medical Institute

The Howard Hughes Medical Institute plays an important role in advancing scientific research and education in the United States. Its scientists, located across the United States and around the world, have made important discoveries that advance both human health and our fundamental understanding of biology. The Institute also aims to transform science education into a creative, interdisciplinary endeavor that reflects the excitement of real research. www.hhmi.org