The Dynamic Genome: An Arms Race With Ourselves

Retracing the ancient battles between jumping genes and the defenses human cells deploy to keep them in check. 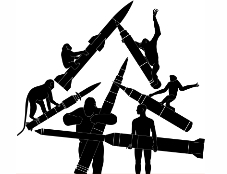 For millions of years, mobile pieces of DNA called transposons have been hopping around organisms' genomes, copying and reinserting themselves at will. Their restlessness is disruptive: when they land inside a gene or its regulators, they alter or impair the gene’s function. A new study from Howard Hughes Medical Institute (HHMI) scientists retraces ancient battles between these jumping genes and the defenses human cells deploy to keep them in check.

HHMI investigator David Haussler, who led the study, says those battles are part of an evolutionary arms race that drives organisms to become increasingly complex, as they evolve mechanisms to fight off ever-changing elements of their own DNA. “This is an arms race with ourselves,” he says. “Our own genome is in this cycle that's driving it toward ever more complexity.”

More than half of the DNA that makes up the human genome is likely derived from transposons, Haussler says. “They've been with us for eons. We think of them as foreign, but they have become part of our genome. They really are us,” he says. These bits of mobile DNA have played an important role in evolution, shuffling from place to place and creating mutations wherever they land. Most of the time, this movement impairs gene function, but it can also create opportunities for organisms to evolve useful new traits.

Despite their occasional benefits, transposons can wreak havoc on a genome if they are allowed to run rampant. “They get out of control, and over generations, our genome becomes bloated with copies of transposons. They do damage by disrupting normal genetic mechanisms,” Haussler says. “Something has to be the security patrol to try and shut these things down.”

Mammalian cells have mounted a valiant effort to contain transposon activity. Findings from the lab of HHMI investigator Stephen Goff had hinted at one possible line of defense: a large family of proteins known as KRAB zinc-fingers.

In 2009, Goff showed that some KRAB zinc-fingers in mice help defend cells against retroviruses, which are closely related to retrotransposons, the dominant type of transposon in mammalian genomes. The genes that encode KRAB zinc-fingers make up one of the fastest evolving gene families in the human genome. More than 400 different human genes encode KRAB zinc-fingers. Many of these are found in other species, but about 170 are present only in primates, meaning they have evolved in the last 50 million years or so.

“The KRAB zinc-finger family is highly unlike other families of genes, which are often stable over many hundreds of millions of years,” Haussler says. “That's an indication that there is enormous evolutionary pressure on primate species to make new KRAB zinc-fingers.”

Scientists had speculated that these new KRAB zinc fingers in primates might represent a response to the barrage of new retroviruses and retrotransposons that primates faced throughout their evolution. Haussler's team wanted to know for sure. So they took one of the most active groups of transposons that operates in ape genomes, called SVA, and began to test whether individual KRAB zinc-fingers could halt its activity. To give SVA plenty of freedom, they introduced it, along with a human chromosome, into mouse cells, which have no natural defenses against this group of transposons.

The scientists focused on 14 primate-specific KRAB zinc-fingers that are prevalent in embryonic stem cells, which are similar to cells where transposons pose the most serious threat. One of these zinc-finger genes, they found, stopped SVA in its tracks. A KRAB zinc-finger called ZNF91 found SVA, bound to it, then recruited other proteins to swoop in and quiet the invader, on occasion also quieting a nearby gene or two as well, a bystander effect.

By comparing relevant portions of the human genome to those of other primates, Haussler's team learned that ZNF91 likely evolved in our ancestors 8-12 million years ago, just after the time of the human and orangutan last common ancestor. During that time, substantial structural changes to a gene that had long been stable suddenly allowed ZNF91 to effectively suppress SVA.

The scientists were able to recreate the predecessor to ZNF91 that existed more than 12 million years ago. “We can see that the ancestralized protein doesn't bind so well to SVA. Then after all of these rapid changes, suddenly it starts binding very well and controlling the SVA. This is by far the most dramatic period in the recent evolutionary history of this gene,” Haussler says.

The team also searched for a control mechanism for a family of transposons known as Line1. Like SVA, Line1 transposons have been around for millions of years, and like SVA, they are very active: remnants of past Line1s make up about 18 percent of the human genome.

The researchers discovered a KRAB zinc-finger that controls some Line1s – but not those that have evolved most recently. “About 12 to 14 million years ago, something happened and control of the Line1s fell apart,” Haussler says. Taking a closer look, the scientists noticed that newer Line1s lack the binding site recognized by a different KRAB zinc finger gene, ZNF93. Loss of that binding site allowed them to evade detection. They probably slowed down a bit too, Haussler says: “When we put that binding site sequence back in, the Line1s work better. But then when you add ZNF93, it binds and really suppresses them. So it was still a net gain in fitness for them to lose that binding site.”

As individual KRAB zinc-fingers become obsolete in the battle – because the transposons they control have settled down – they adopt new roles via the bystander effect, Haussler says. “This process is creating new binding sites along with new proteins that bind them and thereby alter expression of genes near these binding sites,” he explains. “Evolution finds a use for these new binding sites and the new proteins that bind them: they become part of our network of gene regulation.” Thus, he says, regulatory pathways become increasingly complex as evolving organisms fight with their own DNA in this never-ending arms race.