Clovis People Spread to Central and South America, then Vanished

Scientists have found DNA evidence for the southward migration of the people who spread the so-called Clovis culture of North America. But starting about 9,000 years ago, these people were replaced by a distinct population. 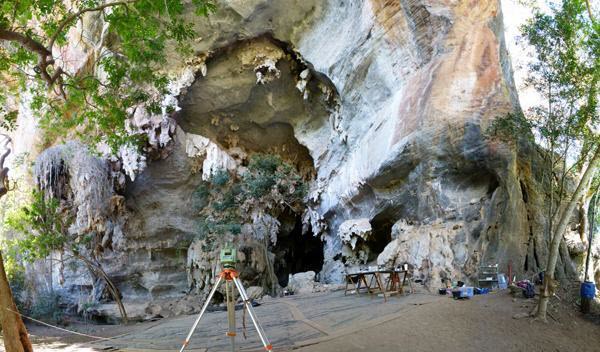 DNA from the 9,600-year-old bones excavated at the Lapa do Santo site in Brazil (above) shows genetic similarity to the Clovis culture-associated genomes found in North America. Credit: André Strauss

In the last few years, scientists have opened a startling new window into humans’ distant past by extracting and analyzing DNA from the bones of people who lived thousands of years ago. Those peoples’ genes tell surprising tales of vast migrations and genetic mixing before the dawn of history.

Now, for the first time, this powerful approach is illuminating the story of ancient humans in Central and South America. An analysis of 49 individuals who lived as long as 11,000 years ago suggests that the Clovis culture, the first known widespread archaeological culture of North America, was also accompanied by a spread of people southward – a migration that some scientists had already suspected.

And then something wholly unexpected happened. Beginning at least 9,000 years ago in Central and South America, the Clovis culture-associated people vanished, Howard Hughes Medical Investigator David Reich and his colleagues report November 8, 2018 in the journal, Cell. The genetic evidence shows they were replaced by a different population.

“That was not anticipated,” Reich says. “It’s the kind of surprise that ancient DNA can deliver.”

The field of ancient DNA has grown dramatically in recent years, climbing from just a few individuals analyzed in 2010 to more than 1,800 today – the majority of which were analyzed by Reich, a geneticist at Harvard Medical School. He and his collaborators have previously shown that Neanderthals interbred with our ancestors and that nomadic herders roamed all the way to central Europe from the Russian steppes starting about 5,300 years ago, replacing the local hunter-gatherers.

Now, Reich’s team has turned to the prehistory of the Americas. Archeologists have amassed considerable evidence of a population of humans who lived in North America beginning more than 13,000 years ago. Researchers dubbed this the Clovis culture because of the distinctive spear points and other stone tools first found near Clovis, New Mexico, in the 1920s. 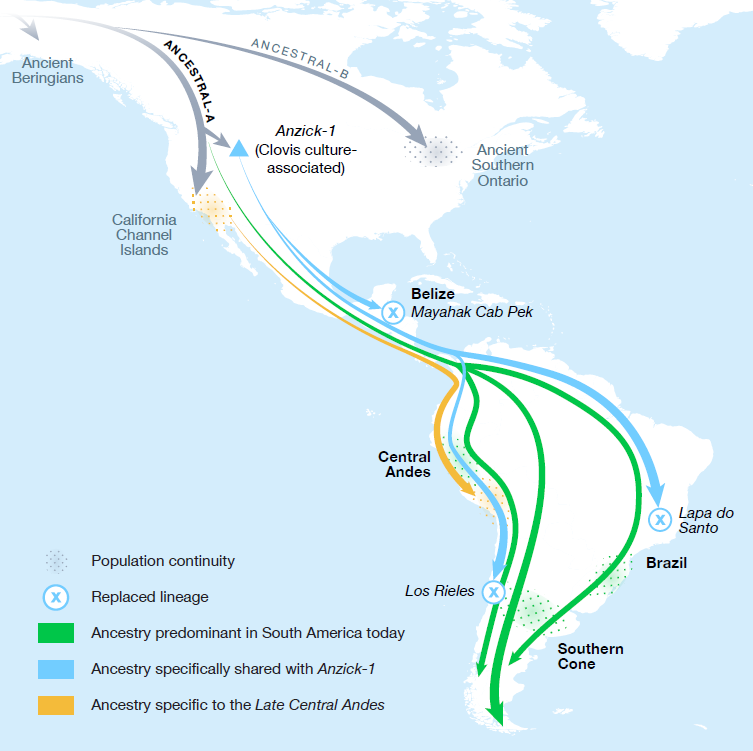 Scientists believe that the people who spread the Clovis culture descended from migrants from Asia who crossed the Bering Land Bridge to North America. Could they also have made a subsequent journey south into Central and South America? Some archeologists have argued yes because of similar spear points, known as “Fishtail,” found later in Central America and farther south.

Ancient DNA offered a new way to look at the question. Reich and his collaborators compared ancient peoples’ genes from sites in Central and South America to genes from a Clovis-linked individual who lived in today’s Montana between 12,700 and 12,900 years ago. There was a clear match between the Montana individual’s genes and the three oldest genetic samples in the new study, which came from Chile, Brazil, and Belize.

“This genetic match was a striking finding,” Reich says. The new data “provide powerful new evidence” that migrations of people who spread the Clovis culture in North American did in fact have an effect farther south – probably related to the dispersal of the Fishtail culture, he explains.

"These data emphasize that there are great events in our history that we didn’t know about – movements of people and genetic mixing that are a recurrent theme of our history."

But then came the surprise. The great majority of the other individuals analyzed, who lived from Belize to Patagonia between 3,000 and 9,000 years ago, belonged to a different genetic lineage. The data imply that a population separate and distinct from the Clovis group also swept south from North America, largely replacing the Clovis-linked lineages. Their identity? Still a mystery. Reich is hoping that archeologists can help solve the puzzle, in combination with additional ancient DNA data. “That’s an exciting part of the active dialogue between these two fields,” he says.

Numerous other questions remain to be answered as well. The oldest known archaeological evidence in South America dates back more than 14,000 years ago ­– older than the Clovis samples in North America. “It is certain the first humans there lived prior to the time of the Clovis culture,” says Reich. “Given that our earliest South American samples all have a clear affinity to a Clovis culture-associated genome, who were they?”

Another striking result is that the genetic signatures Reich and his colleagues found in 2,000-year-old samples from the coast of southeastern Brazil don’t match those of the indigenous people who live in the region now. Instead, the samples’ signatures more closely match groups living farther away. That documents more recent events leading to the formation of present-day groups, Reich says.

The new study adds to the key revelation from the nascent field of ancient DNA – that humans are a much more restless, wandering, and intermingling species than we ever imagined.

“These data emphasize that there are great events in our history that we didn’t know about – movements of people and genetic mixing that are a recurrent theme of our history,” says Reich. “The reality of what happened turns out to be different from what we used to think.”