For some cells, context is everything.

Cells plucked out of their native environs have trouble divvying up their chromosomes correctly, Howard Hughes Medical Institute Investigator Angelika Amon and colleagues have found.

The unexpected discovery, described August 23, 2018, in the journal Cell, could have big implications for scientists trying to grow human tissues in the lab. The results may also help explain why chromosome mistakes run rampant in cancerous cells – an unanswered question in cancer biology. Tumors can change the structure of a cell’s external environment, Amon says. And those changes could be enough to muck with chromosome division, her team’s work suggests.

Scientists often grow cells in flat layers on plastic dishes. Liver cells grown this way are notoriously bad at splitting up their chromosomes during cell division. Instead of dividing chromosomes equally between two daughter cells, liver cells sometimes leave a chromosome lagging behind. 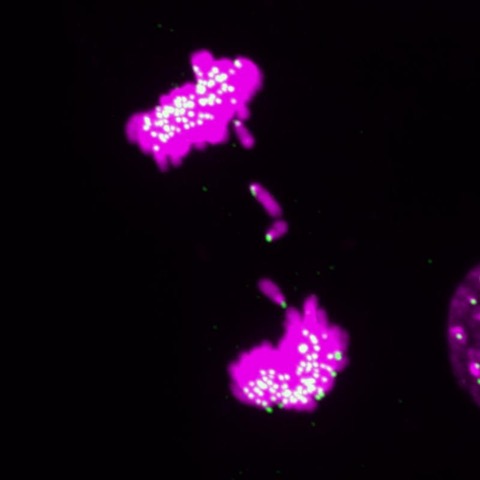 This error can scramble cells’ genetic material – mistakes that may make growing livers in a lab challenging, says Amon, a cell biologist at the Massachusetts Institute of Technology. “Growing livers is the holy grail of regenerative medicine,” she says. Perhaps no one has been able to do it because liver cells grown in a dish “get so messed up that they don’t work anymore,” she adds. The new results hint that there might be a better way.

Along with cell biologist Kristin Knouse, now at the Whitehead Institute for Biomedical Research, and colleagues, Amon compared cell division in liver cells grown in dishes to that of liver cells dividing in a mouse.

As expected, chromosome mistakes piled up in mouse liver cells grown on a lab dish. But when the researchers looked at cells growing within mouse livers, certain chromosome segregation defects didn’t happen. “We were intrigued by what turned out in hindsight to be a major artifact in the field,” Amon says.

This holds true for other cell types, too. Cells from mouse mammary glands and skin showed similar differences in chromosome division, depending on their environment, the researchers found. These results suggest that external forces imparted by the tissue help guide chromosomes within each cell. Such tissue-wide control “blurs the transition where a cell ends and where another cell begins,” Amon says.

It might seem strange that the outside environment controls something as intrinsic to the cell as chromosome segregation, Knouse says. But, within the body, certain types of cells belong to larger structures. “At no point can these cells break free and act individually because doing so would disrupt the structure and function of the tissue,” she says. As a tradeoff, perhaps these cells have become reliant on the larger tissue for some of their intrinsic functions, Knouse adds.

“We need to move on from culturing cells in two dimensions on a plastic dish, when in reality, they’re part of a three-dimensional organ.”

The researchers don’t yet know how exactly the external environment influences a cell’s chromosome division, though they have some hints. A molecule called integrin may play a role by indirectly improving the attachment of chromosomes to the mitotic spindle, the apparatus that divvies up the chromosomes in the cells.

The results could help scientists understand why cancer cells often have abnormal chromosome numbers. Tumors can change the structure of the tissue in which they form, and it’s possible that this change spurs chromosome trouble, the researchers say. “Then, once you start gaining and losing whole chromosomes, you become further genetically unstable,” Amon says. Such instability can make cancers aggressive.

More broadly, the new findings show that cells should be studied in the right context, she says. “We need to move on from culturing cells in two dimensions on a plastic dish, when in reality, they’re part of a three-dimensional organ.”