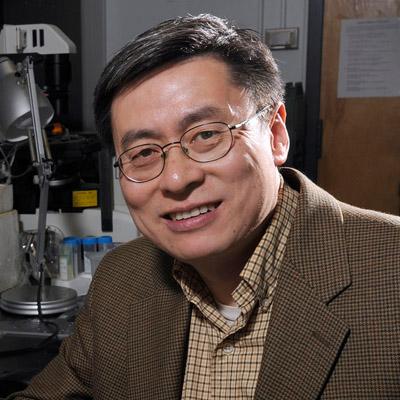 Dr. Dong is a professor of neuroscience, neurosurgery, and dermatology at the Johns Hopkins University School of Medicine. He was an HHMI early career scientist from 2009 to 2015.

Xinzhong Dong knew the family of proteins he discovered as a postdoctoral researcher was diverse. But he couldn't have known that, by continuing to study those proteins in the ensuing years, he would revolutionize the field of itch research by revealing how the brain discriminates itch from pain, and by uncovering why certain drugs cause allergy-like side effects despite not triggering a true allergic reaction.

The proteins Dong studies are cellular receptors called Mrgprs. Several members of the Mrgpr family are found only in sensory neurons, and Dong showed that they function as itch receptors. His team has shown that itch-sensitive nerve cells are distinct from pain-sensing neurons.

Dong's team recently discovered that another Mrgpr is produced exclusively on mast cells – immune system first responders that recruit other immune cells to the site of an injury. This receptor is sensitive to a variety of compounds that trigger the mast cells' call to arms, the researchers found, including components of animal venoms, therapeutic drugs, and inflammation-triggering peptides. Pseudo-allergic drug responses, which are common for a variety of drugs and can range from local inflammation to life-threatening anaphylaxis, are eliminated in mice whose mast cells lack Mrgpr receptors.