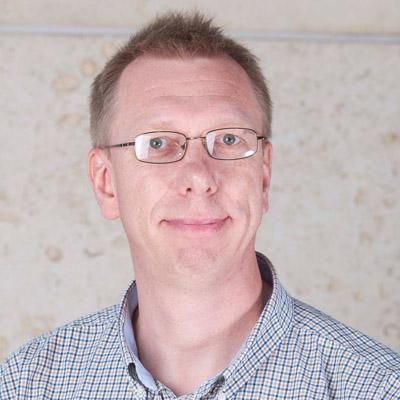 Dr. van der Donk is a professor of chemistry at the University of Illinois at Urbana-Champaign.

Wilfred van der Donk's research group uses chemical tools and principles to gain insights into biological processes, with an emphasis on the biosynthesis of natural products and the use of enzymes for synthetic purposes. The goal of the laboratory is to utilize understanding of these pathways, both to discover new biologically active compounds and to alter their structures to improve their potential utility for human health.

Numerous reports of multidrug-resistant bacterial strains have appeared in recent years, with several strains posing a threat of becoming immune against all available antibiotics. To prevent potential epidemic outbreaks of infectious diseases, there is a need for a renewed focus on antibiotic research, with emphasis on the identification of chemical entities with new mechanisms of action and the development of more efficient and economic synthetic processes. The continuing large death toll due to infectious diseases in developing countries underscores the need to combat pathogenic bacteria. Unfortunately, many of the large pharmaceutical companies have almost entirely withdrawn from this area of research. To contribute to the discovery of antibiotics and/or new targets, we use genomic approaches to discover new natural product antibiotics. Our laboratory is also developing methods to use biosynthetic enzymes to produce natural products. At present we focus on two classes of antibiotics that have been underexplored but have potential for human therapeutic use: ribosomally synthesized and post-translationally modified peptides (RiPPs) and phosphonate antibiotics.

Lantibiotics
Ribosomally synthesized and post-translationally modified peptides (RiPPs) are produced in all three domains of life, their biosynthetic genes are ubiquitous in the currently sequenced genomes, and their structural diversity is vast. Because they are genetically encoded, they are very well suited for genome mining and synthetic biology approaches. Lantibiotics are a subgroup of RiPPs. The best-known lantibiotic, nisin, has been used worldwide in the food industry against foodborne pathogens for decades. In the common first biosynthetic step, serine and threonine residues are dehydrated to give dehydroalanine (Dha) and dehydrobutyrine (Dhb), respectively. A cyclase then catalyzes the regio- and stereoselective additions of cysteine residues to these dehydroamino acids (e.g., Figure 1B for nisin). This process provides intramolecular crosslinks termed lanthionines (from Ser) and methyllanthionines (from Thr) from which lantibiotics derive their name. A typical lantibiotic contains 3–7 (methyl)lanthionines in addition to several Dha and Dhb residues, with individual members containing additional novel post-translational modifications (at present >15 different modifications have been identified). More than 50 different lantibiotics have been reported in the literature with very different structures, ring topologies, and modes of action.

Figure 1: Biosynthesis of nisin A (NisA). A: Dehydration of serine and threonine residues by the NisB dehydratase results in the formation of dehydroalanine (Dha) or dehydrobutyrine (Dhb), respectively. The NisC cyclase subsequently catalyzes lanthionine formation. B: Following ribosomal synthesis, NisB dehydrates serine and threonine residues in the structural peptide region of the substrate peptide NisA. NisC then catalyzes intramolecular addition of cysteines onto the dehydroamino acids in a stereo- and regioselective manner. This leads to the formation of one lanthionine and four methyllanthionines. Subsequent transport of the final product across the cell membrane by NisT and proteolytic cleavage of the leader sequence by NisP produces the mature lantibiotic. From Li, B., and van der Donk, W.A. 2007 Journal of Biological Chemistry 282:21169–21175. © 2007 by the American Society for Biochemistry and Molecular Biology.
Figure 2: Conversion of a linear ribosomally produced peptide into a tetracyclic product by the enzyme HalM2. After removal of the leader peptide by a protease, haloduracin β is generated. Adapted from Cooper, L.E. et al. 2008 Chemistry & Biology 15:1035-45.
Figure 3: Representative phosphonate and phosphinate natural products. The phosphorus-carbon bonds are depicted in blue. From the lab of Wilfred van der Donk.

Our interest in the biosynthesis of lantibiotics derives from a number of observations. First, nisin has been used successfully without the development of widespread resistance for an unusually long period (~40 years). Second, the enzymes that produce lantibiotics in nature are impressive catalysts. We studied one enzyme involved in the biosynthesis of the compound haloduracin that breaks 14 chemical bonds and forms 8 new chemical bonds with defined stereo-, regio-, and chemoselectivity. Despite this remarkable control over chemical reactivity, these biosynthetic enzymes are highly tolerant with respect to their substrate specificity. We have shown that they can be used for reengineering of the structures of naturally occurring lantibiotics to improve their properties with respect to human therapeutic use. Toward this goal, we have reconstituted the biosynthesis of several lantibiotics, including nisin, in vitro. In addition, we have developed a general production platform in Escherichia coli, which we have used for genome-mining studies that have thus far resulted in the discovery and structure elucidation of more than 50 new lanthionine-containing peptides. These new compounds include haloduracin, produced by the alkaliphilic bacterium Bacillus halodurans, and geobacillin I, produced by the thermophile Geobacillus thermodenitrificans. Both compounds are as active as nisin but significantly more stable at physiological pH.

In the course of our mechanistic studies on RiPP biosynthesis, we discovered two new post-translational modifications, Cys-linked glycosylation and Ser/Thr glutamylation, and we demonstrated examples of natural combinatorial chemistry in nature. We also uncovered several intriguing evolutionary links between RiPP biosynthetic enzymes and other proteins.

Phosphonate and Phosphinate Natural Products
Relatively unexplored with respect to biosynthetic pathways are phosphonate antibiotics, despite their current use in antibacterial therapies and in agriculture as herbicides. Phosphonates and phosphinates are effective agents because their phosphorus-carbon bond is resistant to hydrolysis. They exert their biological action as mimics of either carboxylic acids (e.g., phosphinothricin) or phosphate esters (e.g., fosmidomycin). Among the compounds in this class, fosmidomycin is under development as an antimalarial agent, fosfomycin is an FDA-approved drug for the treatment of acute cystitis, and phosphinothricin (PT) found in bialaphos (also called phosphinothricin tripeptide, PTT) is the active ingredient in commercially used herbicides such as BASTA and Liberty. As part of a multidisciplinary effort to better understand the biosynthetic pathways of phosphonate natural products and to discover new family members, our laboratory is involved in a program that is based in the Institute for Genomic Biology at the University of Illinois at Urbana-Champaign. We have discovered several interesting new phosphonates and have found their biosynthetic pathways to be full of highly unusual biochemistry. In the course of our mechanistic studies on one of these enzymes, we unexpectedly uncovered the likely source of methane in the aerobic ocean, which previously had been dubbed the oceanic methane paradox.

This work has been supported in part by grants from the National Institutes of Health.