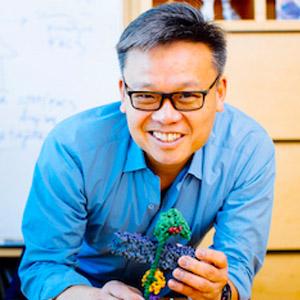 Dr. Lim is professor and chair of the Department of Cellular and Molecular Pharmacology at the University of California, San Francisco.

Wendell Lim is interested in understanding how living cells use molecular networks to process information and make decisions. His laboratory uses biochemical, structural, genetic, computational, and engineering approaches to elucidate the mechanism of signaling proteins and networks. His lab is also interested in understanding how signaling modules can be used to generate new cellular functions, either through evolution or engineering.

How Cells Make Decisions
Living cells are remarkably sophisticated information-processing systems: they take in vast amounts of information from the environment, integrate this information, and use it to make complex decisions about cell response or fate. Many of these responses are mediated by complex networks of signaling proteins. How are signaling circuits built from a system of molecules? How do signaling networks maintain specificity? How has such a diversity of signaling responses evolved? Moreover, as many diseases are caused by signaling malfunctions, how can we control signaling behaviors for therapeutic purposes?

Eukaryotic signaling systems are organized in a modular and hierarchical fashion (Figure 1). Most signaling proteins are built from modular components (e.g., catalytic domains and regulatory/interaction domains). These domains are found in diverse proteins and in diverse combinations. Evolution appears to have used these domains to build complexity. Many of the modular signaling proteins are themselves sophisticated information-processing devices capable of allosteric gating functions. At a higher level, these individual signaling proteins are functionally linked to pathways and networks, which can also show conserved motif structures. Our overall goal is to understand the hierarchical logic by which complex biological signaling systems are built.

Molecular Mechanisms of Modular Signaling Proteins
Many signaling proteins act to gate or guide the flow of regulatory information. We are particularly interested in scaffold and adapter proteins—molecules that have multiple interaction sites that bind and appear to "wire" multiple signaling proteins into specific pathways. We are using biochemical and cell biological approaches to understand the structure and function of these types of signaling devices. We have focused on dissecting the mechanism of MAP kinase cascades involved in transmitting stress responses and on how scaffold proteins interact with and modulate kinase specificity and function. We have also focused on signaling proteins that regulate the actin cytoskeleton and on understanding how they function as a network to yield complex spatial responses, such as cell movement.

Using Synthetic Biology Approaches to Explore the Design Principles of Cell Signaling Networks
Biology is traditionally a field of observation and analysis. However, we have begun to apply synthetic or forward engineering approaches to understand the design principles governing cell signaling systems. In such approaches, we take a toolkit of biological modules and ask how we can use them to build systems with new or precisely modified behaviors. Why take this synthetic approach? First, by trying to link biological components together into functional systems, we can begin to understand the basic rules of biological hierarchy and modularity and gain insight into the process by which novel behaviors evolve. Second, by building minimal or alternative systems that carry out a particular target behavior, we can not only understand how one example system works but also begin to outline the general design principles underlying this class of behaviors. Synthetic networks can be analyzed through well-controlled structure-function analysis, in which network connectivity and parameters are systematically perturbed to learn what is necessary and sufficient to carry out a biological task. Such systematic studies are difficult to perform on purely natural systems that are encumbered by idiosyncratic evolutionary histories. Synthetic approaches are commonly used as research approaches in chemistry and physics, and their application to biology is likely to be extremely valuable. Finally, by tinkering with biological systems, we will progress toward learning how to precisely and predictably engineer cells to carry out useful biotechnological and therapeutic tasks, much in the way that today's electrical engineers can predictably build diverse electronic devices from simple parts such as transistors.

Over the past several years, we have explored how modular signaling domains can be assembled in novel combinations to build new molecular switches and scaffolds. Reconnecting signaling modules to generate non-natural functions has proved to be unexpectedly straightforward, highlighting the remarkable modularity of these components and how they facilitate system evolvability. We have built synthetic switches that control key signaling nodes, such as kinases and GEF proteins, in response to novel inputs. We have been able to use synthetic switches and scaffolds to construct novel feedback networks that lead to novel quantitative decision-making behaviors as well as complex self-organized spatial behaviors, such as cell polarization. Currently, much of our effort is aimed at understanding the basic relationship between regulatory network structure and function. We are using a combination of computational and experimental methods to try to enumerate the space of regulatory networks that are able to execute common cellular regulatory functions.

Engineering Therapeutic Cells
If we understand the logic of how cell signaling networks have evolved, then we should conversely be able to design circuits that execute user-specified functions. In particular, we are interested in engineering cells that carry out specific therapeutic functions. We have recently begun working on engineering the behavior of T cells used for adoptive immunotherapy against diseases like cancer, chronic infection, and autoimmunity. We are interested in controlling the targeting and activation of these T cells by disease and user-specified signals, as well as the precise tuning of their decisions, in order to optimize their therapeutic response (e.g., tumor cell killing), while minimizing uncontrolled responses (e.g., autoimmunity, cytokine storm). The ability to reliably engineer and control the behavior of cells will be critical if we are to use cells as a platform for therapeutics.

Optogenetic Approaches to Interrogate Signaling Networks
Cellular behavior is predominantly studied by observing how a cell responds to natural stresses or molecular signals. We have developed ways to artificially stimulate and probe cells and their regulatory networks by linking light-regulated protein modules to intracellular signaling proteins (Figure 2).Light illumination can then be used to quantitatively turn specific nodes on and off at specific locations in the cell. By harnessing the high spatial and temporal control afforded by light, and the fact that we can use it to program arbitrary activation patterns into cells, we hope to develop ways to quantitatively interrogate how biological input-output relationships are specifically encoded via the combinatorial and dynamic activation of key intracellular signaling nodes.

This work is also supported in part by grants from the National Institutes of Health, the National Science Foundation, the Defense Advanced Research Projects Agency, and the Packard Foundation.