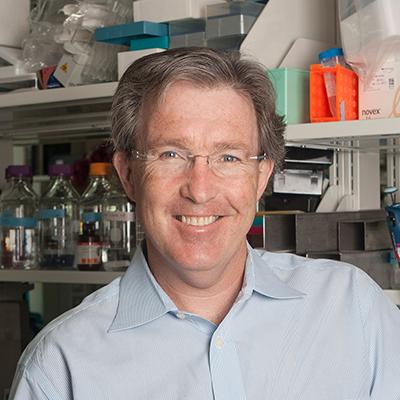 Tyler Jacks is interested in the genetics of cancer development. His laboratory has constructed a series of mutant mouse strains that have served as animal models of tumor development and as a means to study the functions of cancer-associated genes.

The Jacks Lab is interested in the genetic events contributing to the development of cancer. The focus of our research has been a series of mouse strains engineered to carry mutations in genes known to be involved in human cancer. We also study the effects of these mutations on normal embryonic development and use cells derived from mutant animals to study the function of these genes in cell culture models. Current research remains centered on the use of gene targeting to create more powerful and accurate mouse models of human cancer and to explore the pathways regulated by cancer-associated genes. We have generated mouse models of several major human cancer types, including lung cancer, pancreatic cancer, ovarian cancer, astrocytoma, retinoblastoma, peripheral nervous system tumors, soft tissue sarcoma, and invasive colon cancer. The mouse models are being evaluated with cutting-edge tools in genetics, genomics, and imaging, as well as with various chemotherapeutic agents.

The development of tumor cells from normal cells requires the sequential acquisition of mutations in several cellular genes. In general, two classes of genes are affected in tumor progression: genes that normally act to promote cell division (oncogenes) and genes that function to arrest or inhibit cell division (tumor-suppressor genes). Human familial cancer syndromes (in which affected individuals have a greatly increased risk of developing particular types of cancer) are often caused by the inheritance of a mutant allele of a tumor-suppressor gene or an activated allele of an oncogene. Tumor suppressors are thought to regulate cell growth negatively, and they contribute to carcinogenesis when mutated or lost. Thus, individuals who carry only one functional copy of a given tumor-suppressor gene are predisposed to cancer, because all of their cells are just one mutational event from lacking an important negative growth regulator.

Many tumors of epithelial origin in humans acquire mutations in the K-ras oncogene, including approximately 30 percent of non-small-cell lung cancer (NSCLC), 50 percent of colon cancers, and 90 percent of pancreatic cancers. Our laboratory has been investigating the effects of K-ras mutation in the mouse. To control timing and tissue-specific activation of K-ras, we have developed a conditional, activatable allele of the K-ras oncogene and have used it to generate various mouse models of human cancer. In the lung, activation of oncogenic K-ras leads to the development of atypical adenomatous hyperplasia, adenomas, and adenocarcinomas. Combining mutations in K-ras and p53 in the lung led to the development of more advanced tumors, which exhibited desmoplastic stroma, increased invasiveness, and metastatic potential.

Modeling Cancer Using CRISPR/Cas9 Systems
The prokaryotic type II CRISPR/Cas9 system has revolutionized the field of genome engineering, allowing researchers to edit the genomes of a great variety of organisms with unprecedented speed and precision. Experimental approaches based on this highly precise and versatile system have the potential to accelerate the functional identification and detailed characterization of cancer genes. We have recently demonstrated the feasibility of utilizing this powerful approach to model liver cancer by directly mutating cancer genes in vivo. Furthermore, we have recently adapted this technology to model lung cancer mutations in vivo utilizing pre-clinical genetically engineered mouse models (GEMMs) of lung adenocarcinoma. We are currently extending these CRISPR-based in vivo approaches to other GEMMs of human cancer, such as small cell lung cancer, squamous cell carcinoma and pancreatic cancer, among others. In addition, we are extending the utility of these approaches to model both focal and chromosomal alterations frequently observed in human cancer. As the field of cancer genomics moves forward with the identification and cataloguing of recurrent somatic mutations and copy number alterations in a variety of human cancers, our CRISPR-based experimental platforms offer a rapid, precise and affordable opportunity to functionally interrogate the cancer genome using sophisticated GEMMs of human cancer.

Ras Biology in Pancreatic Cancer
Pancreatic ductal adenocarcinoma (PDAC) is the fourth leading cause of cancer death in the United States and a major unsolved health problem worldwide with nearly all patients succumbing to their disease. Currently, there are limited effective treatment options for PDAC. K-ras oncogenic mutations are found in >90% of advanced PDAC in human patients and are thought to be initiating events in PDAC development. Moreover, K-ras mutations appear to be required for tumor maintenance, making K-ras an attractive therapeutic target. In our lab, we have developed several K-ras-induced PDAC mouse models that recapitulate the progression and histology of human PDAC. Using tumors and stable cell lines derived from these models to manipulate gene function and perform sequencing, expression profiling, and proteomic analyses, we are studying the role of K-ras in PDAC. A better understanding of the biology underlying the requirement for K-ras in pancreatic tumors may offer novel diagnostic biomarkers and more effective combination therapies against PDAC.

Small Cell Lung Cancer
Small cell lung cancer (SCLC) is a high-grade neuroendocrine cancer that is among the most lethal solid tumor malignancies, with a 5-year overall survival of less than 5%. There are no effective therapies available for treating SCLC, and treatment outcomes have remained virtually unchanged for the past thirty years. Our lab uses genetically engineered mouse models of SCLC to better understand two important questions: 1) what are the mechanisms of SCLC progression from early pre-cancerous tumors to highly metastatic cancers, and 2) why do these tumors fail standard chemotherapy treatments?

Mice are engineered to lose the genes encoding the key tumor suppressors p53 and Rb in the precursor lung cells that give rise to SCLC. These animals develop highly metastatic, lethal, SCLC tumors. We have applied modern genomics and sophisticated live-animal imaging methods to show that tumors in the mouse model acquire additional “driver” genetic alterations that contribute to the aggressive behavior of SCLC. In addition, these studies have suggested that tumors may spread (metastasize) earlier and in more complex patterns than previously hypothesized. Our current work extends these studies using methods to identify and study circulating cancer cells, pre-clinical studies using targeted and combination therapies, and genome-engineering approaches to identify, and target, additional drivers of SCLC progression and treatment resistance.

Tumor Immunology
Cancer immunology has tremendous therapeutic promise, as the immune system has the potential to find and completely eliminate tumor cells throughout the body and provide long lasting immunity from cancer. We are currently investigating how immune cells and tumor cells interact during tumor development and how productive and non-productive anti-tumor immune responses affect the development of cancer in mice. Standing in the way of potent anti-tumor responses by immune cells are natural “road-blocks” that prevent the immune system from attacking the body. Complete elimination of these “road-blocks” could be fatal. The key to successful therapeutic stimulation of anti-tumor responses lays in understanding how to ease the regulations on the immune system and allow anti-tumor responses to occur. The cancer immunology group in our lab focuses on two main groups of cells: T cells and NK cells. The interactions between tumor cells and T cells have been studied for many years. However, the reason why T cells do not naturally eliminate tumor cells (as they do infected cells) remains unclear. The lab is also focused on natural killer (NK) cells, thought to kill tumor cells in the body, and finding ways to target these cells towards tumors. As T cells and NK cells play an important role in lung cancer development and modulating these pathways maybe a viable therapeutic strategy for improving outcomes for patients with lung adenocarcinoma. In addition, the lab is interested in understanding the role of other innate immune cell types such as macrophages and dendritic cells in the recognition of developing tumor lesion and instruction of adaptive anti-tumor immunity.

These studies are also supported by grants from the National Institutes of Health, Lustgarten Foundation, Ludwig Fund for Cancer Research and the Department of Defense.