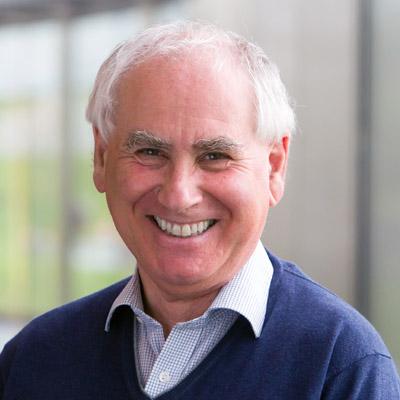 Dr. Rapoport is a professor of cell biology at Harvard Medical School.

Tom Rapoport is interested in the mechanism by which proteins are transported across membranes and how organelles form and maintain their characteristic shapes.

Biological cells of higher organisms are complicated structures, containing a number of organelles that are separated from the cytosol by membranes. Each organelle has a characteristic shape and performs special functions that are carried out by different proteins. How do organelles achieve their different structures and receive specific sets of proteins? The answer to this question is clearly important for an understanding of both how biological structures are generated and how they are propagated during cell division. The problem has relevance for the identification of the basis of diseases in which proteins are misdirected, misfolded, or degraded.

Many proteins are exported from the cytosol to other cellular destinations. The most prominent route involves the secretory pathway, where proteins initially cross the endoplasmic reticulum (ER) membrane by a process called protein translocation. Soluble proteins, such as secretory proteins, cross the ER membrane completely. Membrane proteins, such as those in the plasma membrane or in other organelles of the secretory pathway, are integrated into the lipid bilayer by transmembrane (TM) segments, while some hydrophilic segments are translocated across the membrane and others stay in the cytosol. All these proteins are targeted to the ER membrane by hydrophobic sequences, either cleavable signal sequences or noncleaved TM sequences. Protein secretion and membrane integration occur in a similar way in bacteria and archaea, except that translocation occurs through the plasma membrane. 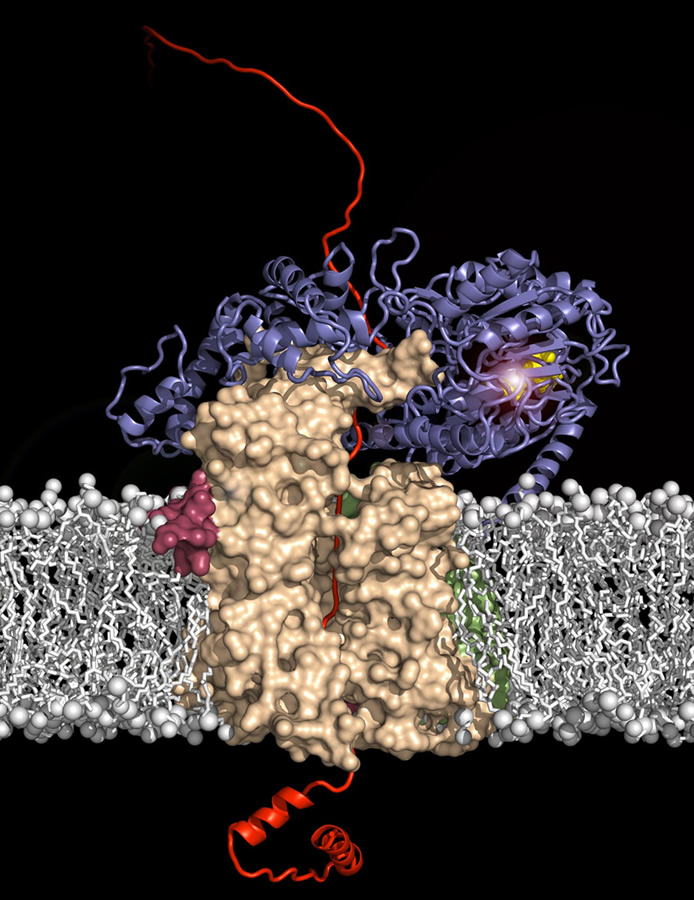 Proteins cross the membrane through a channel that is formed from a conserved heterotrimeric membrane protein complex, called the Sec61 complex in eukaryotes and the SecY complex in bacteria and archaea. The Sec61/SecY channel alone is a passive pore; it must associate with partners that provide a driving force for translocation. In cotranslational translocation, the main partner is the ribosome. In posttranslational translocation, a ratcheting mechanism is used by the ER-luminal chaperone BiP in eukaryotes, and a pushing mechanism is utilized by the SecA ATPase in bacteria. A major effort in our lab is directed toward elucidating the molecular mechanisms of these translocation pathways.

Our early work on protein translocation across the ER membrane employed photocrosslinking methods to identify proteins in proximity of translocating polypeptide chains. This led to the discovery that Sec61p forms a protein-conducting channel. Crosslinking, reconstitution, and other biochemical methods have clarified important aspects of co- and posttranslational translocation, such as the mechanisms by which signal sequences are recognized, TM segments of membrane proteins are partitioned into the lipid phase, and by which BiP acts as an ATP-dependent molecular ratchet.

An important achievement is the determination of the x-ray structure of an archaebacterial homolog of the Sec61p complex (collaboration with Stephen Harrison, HHMI, Harvard Medical School). The structure shows the protein-conducting channel in its closed state. Viewed from the cytosol, the channel looks like a clamshell, and in a cutaway view from the side, it looks like an hourglass with a constriction in the middle of the membrane. The extracellular funnel of the hourglass is plugged by a short helix. During protein translocation, a signal sequence inserts itself into the mouth of the clamshell and destabilizes interactions that keep the plug in the center of the molecule. The plug moves out of the way, and the polypeptide chain then passes through the constriction from the cytosolic to the extracellular funnel. The structure also indicates how TM segments of membrane proteins move into the lipid phase. Many of the predictions of the crystal structure have now been confirmed experimentally. This includes the mechanism by which the protein-conducting channel maintains the barrier for small molecules. The first structure of an active channel, consisting of a complex of a translating ribosome bound to a SecY channel, was determined by electron cryo-microscopy (collaboration with Christopher Akey, Boston University). Recently, we obtained a higher-resolution crystal structure of an active channel, which demonstrates that the hydrophobic part of the signal sequence exits the lateral gate and docks at a specific site that faces the lipid phase. This structure explains why hydrophobicity is the essential feature of a signal sequence, while its length and sequence can vary. It also shows that signal sequences behave similarly to bilayer-spanning domains of membrane proteins.

Over the past decade, we have studied intensively posttranslational protein translocation in bacteria, which is mediated by the SecA ATPase. We have determined a structure of SecA bound to the SecY channel, which gave insight into how polypeptides are moved by the ATPase. Biochemical experiments showed that SecA uses a "push and slide" mechanism; in its ATP-bound state, it pushes polypeptide chains by movements of its two-helix finger, and in its ADP-bound state, it allows passive sliding of a polypeptide chain. This mechanism explains how SecA can move a wide range of different amino acid sequences.

A major project in our lab concerns the mechanism of ER-associated protein degradation (ERAD), a process in which misfolded ER proteins are transported back into the cytosol, polyubiquitinated, and degraded by the proteasome. ERAD alleviates cytotoxic stress imposed by protein misfolding and is implicated in numerous diseases. The cellular pathway is also hijacked by certain viruses and toxins. In our early work, we studied the mechanisms by which the human cytomegalovirus protein US11 triggers ERAD of the antigen-presenting major histocompatibility complex class molecules, and by which a fragment of cholera toxin crosses the ER membrane into the cytosol. Major discoveries include the role of the ATPases p97 (Cdc48p in yeast) and its two cofactors Ufd1p and Npl4p in moving polypeptides from the ER into the cytosol, as well as of Derlin (Der1p in yeast), a conserved membrane protein.

We have performed a comprehensive analysis of ERAD in Saccharomyces cerevisiae. Our analysis showed that substrates use three ERAD pathways (ERAD-L, -M, or -C), depending on whether the misfolded domain is localized in the ER lumen, inside the ER membrane, or at the cytosolic side of the ER membrane. The pathways use distinct ubiquitin ligase complexes, but they all converge at the Cdc48p ATPase complex. These experiments led to the identification of most, if not all, ERAD components. We subsequently concentrated on ERAD-L, which is arguably the most complex pathway, because proteins have to move across the ER membrane. We demonstrated that the ubiquitin ligase Hrd1p is the crucial membrane component, as its overexpression bypasses the need for the other membrane proteins. We have recently reconstituted this basic ERAD-L reaction with purified proteins. These experiments led to a model in which polypeptide substrates are moved through the ER membrane by autoubiquitination of Hrd1p, followed by the function of the Cdc48p ATPase complex.

Another major project in our lab addresses the mechanism by which ER morphology is generated and maintained. Starting with an in vitro system that recapitulates the formation of an ER network with Xenopus egg membranes, we have identified two integral membrane protein families, the reticulons and DP1/Yop1p, which are involved in shaping ER tubules. Members of both families are highly expressed in all eukaryotic cells. These proteins are both necessary and sufficient to generate membrane tubules. They probably generate high membrane curvature by forming wedges in the cytoplasmic leaflet of the lipid bilayer and by oligomerizing into arc-like scaffolds around the tubules. They are also involved in generating membrane sheets by stabilizing the high curvature of sheet edges. Their abundance therefore determines the balance between tubules and sheets. Recent work has addressed how ER sheets are stacked on top of each other, a prominent feature in highly secretory cells. We show that sheets are connected by helicoidal membranes, such that the structure resembles a parking garage.

We have identified a class of dynamin-like, membrane-bound GTPases, which includes the atlastins (ATLs) in mammalian cells and Sey1p in S. cerevisiae, which mediate the fusion of ER membranes. Mutations in atlastin-1 cause hereditary spastic paraplegia, a disease characterized by the progressive shortening of the long axons of motor neurons. Crystal structures of the cytosolic domain of ATL and biochemical experiments show that ATL molecules in different membranes initially interact through their GTPase domains and then undergo a conformational change that pulls the two membranes together so that they can fuse.

A grant from the National Institutes of Health provided support for some of these projects.