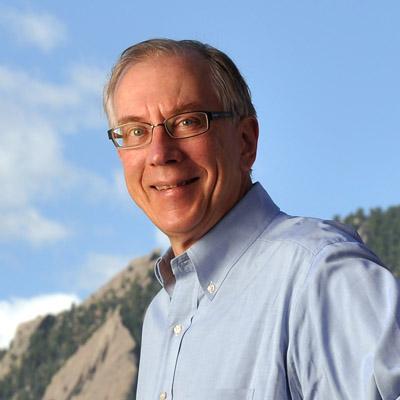 Dr. Cech is Distinguished Professor, Department of Chemistry and Biochemistry, at the University of Colorado Boulder and director, University of Colorado BioFrontiers Institute. Dr. Cech was an HHMI investigator from 1988 to 2000. In 2000 he became president of HHMI, and in April 2009 he stepped down as head of HHMI to conduct research on a full-time basis.

Tom Cech and his research group are studying the structure and mechanism of long noncoding RNAs and RNA-protein complexes, including telomerase and complexes that regulate transcription. Their research also focuses on the telomeric DNA-protein complexes that cap the ends of human chromosomes and help regulate telomerase. The overarching goal is to understand the detailed mechanism of these systems and how their misregulation contributes to diseases, including cancer.

Our lab's early work on catalytic RNAs (ribozymes) helped to establish that RNA is not restricted to being a passive carrier of genetic information, but can have an active role in cellular metabolism. We have now moved out of this RNA world to investigate other long noncoding RNAs, where catalysis is carried out by RNPs (RNA-protein complexes).

Telomerase, an RNP enzyme critical for chromosome end replication, provides the subject for much of our research. Telomerase is a fascinating biochemical system because a large DNA-protein complex (the chromosome end) must interact productively with an RNA-protein complex (telomerase).  In addition, telomerase is biologically and medically important; telomerase mutations lead to diseases involving degeneration of highly proliferative tissues, and activation of expression of telomerase in adult human somatic cells is a step toward cancer.

Telomerase
Telomerase was discovered in 1985 by Elizabeth Blackburn and Carol Greider, who also cloned and sequenced its template-containing RNA subunit. The catalytic protein subunit, however, remained elusive. As a postdoctoral fellow in our lab, Joachim Lingner purified telomerase from the ciliated protozoan Euplotes, which has an astoundingly large number of telomeres, and found that it contained a reverse transcriptase subunit. TERT (telomerase reverse transcriptase) was quickly identified in other organisms, including budding and fission yeast, Tetrahymena, and humans. An ongoing area of research aims to understand the structure and function of the core telomerase RNP.

Telomere maintenance is required for continued proliferation of human cells, and in about 90% of human cancers this requirement is met by reactivation of telomerase. In most cases the TERT component is limiting, so its reactivation is necessary and sufficient for telomerase upregulation. Yet TERT seemed like an unusual oncogene, as gene rearrangements or activating mutations in the protein-coding sequence were uncommon in cancer. This mystery was cracked in 2013, when two groups found a point mutation in the promoter for the TERT gene. We have shown that these mutations are causal for telomerase activation and provide a switch from an epigenetically silenced to a transcriptionally active state specifically for the allele that has the mutation. This is an important example of how a genetic change can drive epigenetics. Understanding the sequential steps in monoallelic TERT activation is a future goal for many laboratories, including ours.

Chromosome End-Capping Proteins
Cells must distinguish broken chromosome ends, which elicit a DNA-damage response, from the natural ends called telomeres. Telomeric DNA typically consists of multiple repeats of a short sequence, such as TTAGGG in mammals. These repeats are synthesized by telomerase. The DNA repeats recruit proteins that cap off the chromosome ends, preventing the DNA-damage response, and these proteins also regulate telomerase action. Some telomeric proteins bind double-stranded regions of the telomeric DNA, while others bind the single-stranded DNA "tail" at the very end of the chromosome.

Telomeric single-stranded DNA-binding proteins were first identified in ciliated protozoa, facilitated by the extremely large number of minichromosomes present in these organisms. Our lab cloned and sequenced the genes for two Oxytricha nova telomere end-binding proteins (TEBPs) in 1990 and 1991, but for a decade thereafter it was unclear whether humans even had corresponding proteins. Then in 2001, Peter Baumann in our lab identified candidate genes in Schizosaccharomyces pombe and in humans, which were named POT1 (protection of telomeres 1). The deletion of the gene for Pot1 in S. pombe deprotected the telomeres, leading to rapid loss of all telomeric DNA; rare survivors had circularized all three of their chromosomes, thereby circumventing the need for telomeres. X-ray crystal structures of Pot1 protein-telomeric DNA complexes from S. pombe and human by Ming Lei in our lab revealed the molecular basis of sequence-specific DNA recognition, while work in other labs identified a binding partner of Pot1, now called Tpp1. Thus, the ciliate TEBP α-β dimer has a human homolog, POT1-TPP1. 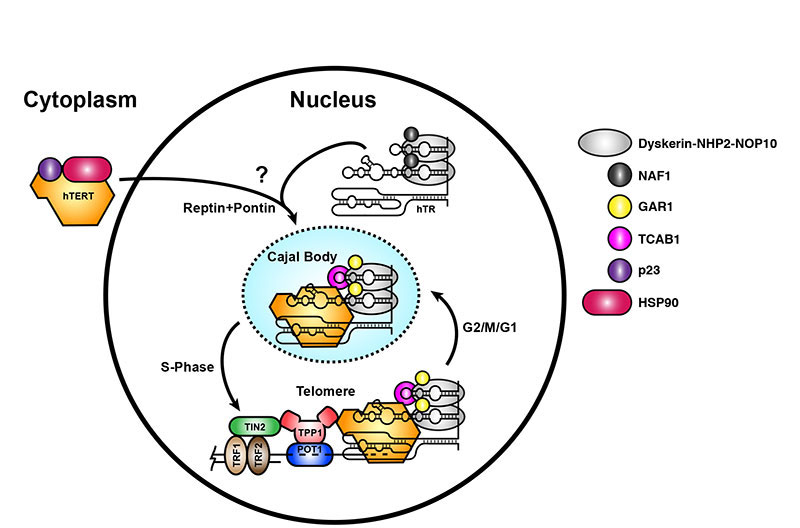 Recently, we have tackled the question of how the telomerase RNP is recruited to the telomere in human cells. We and others have identified specific amino acids in the N-terminal domain of TERT and on the surface of the telomeric TPP1 protein that directly interact to recruit telomerase. Our current research is aimed at extending this work: How does telomerase search the nucleus to find the telomeres and what are the dynamics of the process? Can useful inhibitors of telomerase recruitment be identified, perhaps providing proof-of-principle for a new pharmaceutical target?

Long Noncoding RNAs Regulating Transcription
While previous research has suggested the specific binding of the histone methyltransferase PRC2 to XIST RNA, required for X-chromosome inactivation in females, and to HOTAIR, which regulates expression of the developmentally important HOX genes, our work has revealed widespread promiscuous binding of PRC2 to a large number of RNAs, both in vitro and in vivo. Genome-wide experiments, by Chen Davidovich in our lab, support a model in which promiscuous binding of PRC2 to RNA allows it to maintain epigenetically silenced chromatin while it ignores genes enriched in marks of active chromatin. Our PRC2 research integrates genome-wide analysis with biochemical and biophysical approaches. 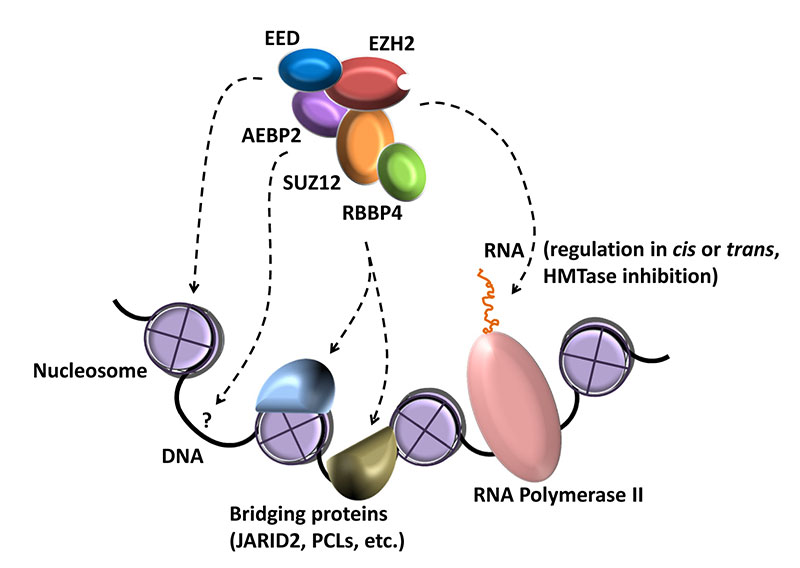 CRISPR-Cas9 genome editing provides a powerful new opportunity to test models of the biological function of lncRNA-PRC2 interaction. For example, we are inactivating lncRNA genes in the vicinity of epigenetically silenced protein-coding genes and assessing effects on PRC2 recruitment and transcription in cells. Mechanistic understanding also requires in vitro experiments, so we are studying PRC2-lncRNA-chromatin interactions using biochemistry and structural biology.

Research described above includes projects supported in part by the National Institutes of Health.