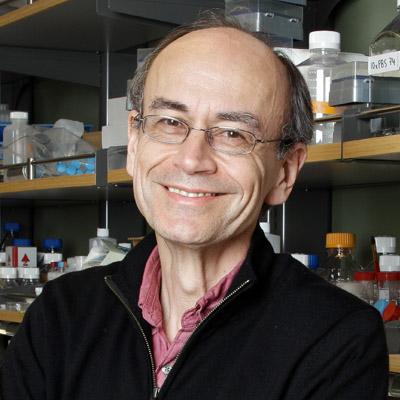 Thomas Südhof is interested in how synapses form and function in the developing and adult brain. His work focuses on the role of synaptic cell-adhesion molecules in establishing synapses and shaping their properties, on pre- and postsynaptic mechanisms of membrane traffic, and on impairments in synapse formation and synaptic function in neuropsychiatric and neurodegenerative disorders. To address these questions, Südhof's laboratory employs a spectrum of approaches ranging from biophysical studies and physiological and behavioral investigations of mutant mice to analyses of human neurons.

Work in my laboratory asks two related sets of questions about how synapses form and function: (1) How does a presynaptic nerve terminal establish a synapse on a postsynaptic neuron, how are the properties of the resulting synapses specified, and how are synapses impaired in neuropsychiatric disorders? (2) What mechanisms underlie regulated membrane traffic at a synapse, both presynaptic vesicle exocytosis that mediates neurotransmitter release and postsynaptic receptor exocytosis that mediates long-term plasticity? These two questions are connected in that synapse formation, among others, organizes the specific and unique machineries enabling regulated pre- and postsynaptic membrane traffic. Indeed, we found that the same cell-adhesion molecules that connect pre- and postsynaptic sides are also essential for enabling presynaptic neurotransmitter release and postsynaptic long-term plasticity. Our overall strategy is to identify the molecules involved, to delineate the properties and structures of these molecules, and to understand the physiological functions of these molecules at the level of individual synapses, or circuits, and of a whole animal. In this manner, we hope to not only contribute to an atomic description of synapse function, but also to an understanding of how circuits are formed, specified, and restructured throughout the life of an animal.

Synapse Formation and Specification
At a synapse, the pre- and postsynaptic compartments are linked by trans-synaptic cell-adhesion molecules. These molecules in turn are coupled to the presynaptic release machinery and to postsynaptic receptors. Twenty-five years ago we identified neurexins, the first specifically synaptic cell-adhesion molecules (Figure 1). Neurexins are expressed from three genes in two principal forms called alpha- and beta-neurexins, and are highly polymorphic due to extensive alternative splicing. Subsequently, we described neuroligins as postsynaptic neurexin ligands, followed by a host of additional trans-synaptic neurexin ligands including dystroglycan, neurexophilins, LRRTMs, and latrophilins. The importance of neurexins and their ligands in brain function is highlighted by the fact that mutations in their genes are repeatedly observed in patients with autism and schizophrenia—in fact, mutations in neurexin-1 at present represent the most abundant validated single-gene mutations predisposing to schizophrenia.

Figure 1: Schematic view of synaptic architecture. As exemplary synaptic cell-adhesion molecules, presynaptic neurexins are shown to bind to postsynaptic neuroligins, mediating trans-synaptic signaling. Elements are not shown in scale. Adapted from Südhof, T.C. 2008 Nature 455:903-911.
Figure 2: Experiment demonstrating that presynaptic alternative splicing of neurexin-3 in CA1 pyramidal neurons controls postsynaptic NMDA-receptor-dependent LTP at the efferent synapses formed by these neurons on subiculum pyramidal neurons. Three mouse lines were analyzed, wild-type control mice, knock-in mice with expression of neurexin-3 that always contains in insert in splice site 4 with stereotactic infected of their CA1 region neurons by control lentivirus (SS4+), and the same mice with stereotactic injection of their CA1 region neurons by Cre-recombinase expressing virus that excises the insert in splice site 4 (SS4-). A, experimental design; B and C, LTP measurements. Adapted from Aoto, J. et al. 2013 Cell 154:75-88.
Figure 3: Cartoon of the presynaptic active zone with a primed synaptic vesicle competent to fuse, and a trans-synaptic cell-adhesion complex composed of presynaptic LAR-type receptor tyrosine phosphatases (PTPRF, PTPRD, and PTPRS), and various postsynaptic ligands. Adapted from Südhof, T.C. 2012 Neuron 75:11-25.
Figure 4: Summary diagram of the phenotype of conditionally SHANK3-mutant human neurons. Panels show that SHANK3-mutant neurons exhibit a decreased Ih-current due to decreased HCN channel activity, which results in an increase in input resistance, a decrease in dendritic arborization, a decrease in synaptic activity, and an increase in neuronal excitability. Adapted from Yi, F. et al. 2016 Science pii: aaf2669 [Epub ahead of print].

Neurexin alternative splicing is tightly regulated, such that different types of neurons express different combinations of splice variants, resulting in a neurexin splice code. Binding of neurexins to at least some postsynaptic ligands is regulated by this alternative splicing, suggesting that alternative splicing is physiologically significant. Genetic experiments revealed that neurexins and neuroligins are essential for survival and are essential for synaptic function, but are not generally required for the initial establishment of synapses. In mice lacking various forms of neurexins or neuroligins, synapses appear ultra-structurally normal, but synaptic transmission is impaired in specific features depending on what neurexin or neuroligin isoform was mutated and depending on what synapse type was analyzed. For example, neuroligin-1 is essential for the normal recruitment of glutamate receptors to excitatory synapses and additionally required for NMDA-receptor dependent LTP, while neuroligin-2 is critical for the function of inhibitory synapses, and neuroligin-3 controls trans-synaptic endocannabinoid signaling. As another example, alternative splicing of presynaptic neurexin-3 at one particular site, splice site #4 (SS4), also controls glutamate receptor trafficking at excitatory synapses, and additionally gates NMDA-receptor mediated LTP, possibly via trans-synaptic interactions with postsynaptic neuroligin-1 and -3 (Figure 2). Viewed together, these and many other observations led to the hypothesis that neurexins and their ligands, in particular neuroligins, act to specify synapses, i.e. to confer particular properties onto a given synapse.

A major challenge now is to understand how neurexins shape synaptic circuits and collaborate with other trans-synaptic cell-adhesion molecules, and which other trans-synaptic cell-adhesion molecules play a central role in synapse development, synaptic plasticity, and synapse maintenance. Notably, not a single molecule has yet been identified that is specifically involved in the initial formation of synapses in any organism, and little is known about the mechanisms that determine the specificity of synapse formation which is so crucial for the construction of neural circuits. In particular, we are trying to address how synapses are formed in the first place independent of neurexins, how synapse specificity is determined, and what additional molecules shape their properties. The molecular components of the synapse formation and specification machinery are only now beginning to be defined, with neurexins leading the way – undoubtedly many proteins will follow. Given the complexity of synaptic connectivity – with at least 1016 synapses in brain! – a combinatorial code that is governed by rather simple principles may apply. Addressing these questions is a major goal of my laboratory.

Pre- and Post-Synaptic Membrane Traffic
Synaptic vesicle fusion is mediated by a fusion machinery containing two core components: three synaptic SNARE proteins – the vesicle protein synaptobrevin/VAMP and the plasma membrane proteins SNAP-25 and syntaxin/HPC-1 – and one SM protein (for Sec1/Munc18-like protein) – the soluble protein Munc18-1. These components assemble into sequential complexes that are exquisitely regulated. The SNARE proteins are the "muscle" of the fusion reaction that provides the energy, but Munc18-1 and other SM-proteins are the “brain” that effectively catalyze fusion by acting on the SNARE proteins. This fusion mechanism, first elucidated at the synapse, appears to generally apply to intracellular fusion reactions (Figure 3).

At the synapse, synaptic vesicle fusion is triggered by Ca2+-binding to the synaptic vesicle protein synaptotagmin. Synaptotagmin contains two C2-domains that bind Ca2+ in ternary complexes with phospholipids and SNARE proteins. An emerging model suggests that before release is triggered, the Ca2+-independent interaction of synaptotagmin with SNARE complexes positions synaptotagmin for subsequent Ca2+-sensing. When Ca2+ flows into the terminal during an action potential, Ca2+-binding to the synaptotagmin C2-domains induces their association with phospholipids and opens the fusion pore to trigger release. In these activities, synaptotagmin co-operates with a small SNARE-complex binding protein called complexin; both synaptotagmin and complexin are essential for Ca2+-triggering of release, and both act simultaneously as activators and clamps of membrane fusion to ensure precise regulation of release.

In presynaptic terminals, neurotransmitter release occurs at the active zone, which are large juxtamembranous protein complexes whose central components are Munc13s and RIMs (Figure 3). In addition, other proteins such as RIM-BPs, liprins, and ELKS contribute to the active zone. Munc13s and RIMs contain multiple domains that mediate the docking and priming of synaptic vesicles for exocytosis, and recruit Ca2+-channels into close proximity to the release sites via direct binding of RIMs to Ca2+- channels. Moreover, RIM and Munc13 proteins mediate use-dependent changes of release during short- and long-term synaptic plasticity, thus being crucial for learning and memory. Thus, the active zone constitutes a mosaic protein complex whose precise composition and activity state determine the properties of a synapse such as its strength and plasticity.

Extending Synapse Studies to Human Neurons and Diseases
Neuropsychiatric and neurodegenerative diseases impose a heaven burden on humanity, both in terms of personal suffering and economic loss. To better analyze potential mechanisms involved in human disorders, we recently developed in collaboration with Marius Wernig’s laboratory (Stanford) new approaches to generating human neurons by direct trans-differentiation of fibroblasts or ES/iPS cells. We introduced conditional mutations mimicking human disease mutations into these neurons, and analyzed them morphologically and functionally.

These studies have led to a characterization of mutations in disease genes such as neurexin-1 (implicated in schizophrenia and autism), L1CAM, Munc18-1, and SHANK3 that was precisely controlled for genetic background. We identified phenotypes that sometimes resembled the effect of such mutations in mice (e.g., SHANK3), and in other cases were much more severe than those observed in mice (e.g., neurexin-1). Occasionally, the mechanisms of disease uncovered were quite surprising, as exemplified in the SHANK3 studies which revealed an unexpected Ih-channelopathy (Figure 4). We hope that this approach has the potential not only to allow a more detailed description of human disease mechanisms, but may also be expandable to various screening experiments that might provide further insights into basic biological processes and possible drug targets.

These studies were funded in part by grants from the National Institutes of Health.