Stuart Orkin's research focuses on stem cell biology, particularly the development and function of the blood system, the relationship between cancer and stem cells, and the mechanisms responsible for self-renewal of stem cells and the switch from fetal to adult hemoglobin.

In this laboratory we study gene regulation as it pertains to the properties and development of stem cells. Stem cells, whether of embryonic or adult origins, give rise to additional stem cells (the process of self-renewal) and generate cells representative of specific lineages (the process of differentiation). Our efforts are directed toward understanding the nature and function of genes that control these processes and how disturbances in gene networks may lead to cancer. In addition to studying adult stem cells or progenitors for the blood system, we also have investigated the nuclear factors that control self-renewal of mouse embryonic stem (ES) cells. Our goal is to identify basic mechanisms that may be employed by different types of stem cells, and perhaps reveal molecular pathways shared among stem cells.

We have been interested in how nuclear regulatory proteins control formation and function of hematopoietic stem cells. Previously, we identified transcription factors that specify hematopoietic stem cells and individual lineages. These factors are often the targets of somatic mutation or chromosomal translocation in human leukemias. We have identified the critical regualtors of hematopoietic stem cells and specific lineages (notably, the erythroid lineage) and defined the regulatory network within which they function by combining genome-wide occupancy and gene expression analyses. To validate functional requirements for cis-regulatory elements in promoters and/or enhancers, we are using gene editing by CRISPR/Cas9.

Additional regulatory mechanisms in stem cells and development involve "epigenetic" controls, including DNA methylation and histone modification. Our work in ES cells has led to reexamination of the composition and function of the Polycomb repressive complex known as PRC2. This complex, composed of the core components EED, Suz12, and EZH2, is responsible for the repressive chromatin mark H3K27me3, which is believed to recruit another Polycomb complex, PRC1, to achieve permanent gene silencing. Through protein purification and sequencing, we have shown that the PRC2 complex is more complex than previously believed. Complexes contain alternatively EZH2 or a related protein EZH1, but not both. Thus, the nature, and presumably the function, of PRC2 changes dynamically during development and among different cellular lineages. Our ongoing studies are focused on other proteins that associate with PRC2 and on how PRC2 functions during differentiation and contributes to, or opposes, oncogenesis.

Regulatory mechanisms operative in stem cells and development are directly relevant to human cancers. In specific instances, we are using genome-wide vulnerability screens to identify new targets for potential therapy in cancer. 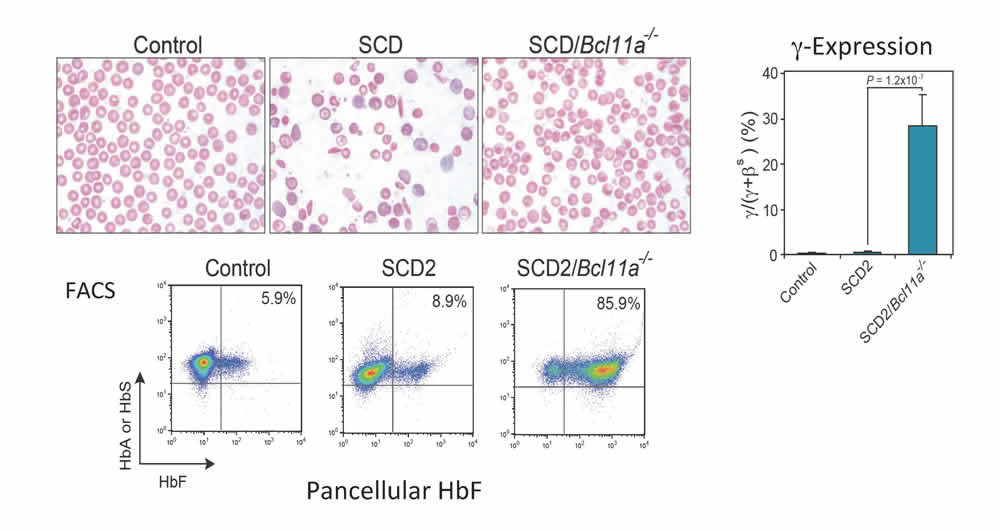 The regulation of globin genes has been an important paradigm since the beginning of the recombinant DNA era. During normal human development, globin genes are expressed successively: in early fetal life the predominant epsilon-like globin is the embryonic beta-globin gene, which is then followed by expression of the fetal gamma-globin gene, and ultimately by expression of the adult beta-globin gene. Major clinical disorders related to mutation of the coding or regulatory sequences of the beta-globin gene, such as sickle cell anemia and the beta-thalassemias, would be ameliorated by preventing shutoff of the fetal ?-globin gene or reactivation of the gene in adult life. How gamma-globin gene silencing is achieved and maintained has been the focus of the field for more than two decades. Recently, taking advantage of a genome-wide association study (GWAS) that identified single-nucleotide polymorphisms (SNPs) correlating with the level of fetal hemoglobin in patients, we showed that the zinc finger protein BCL11A functions as a silencer of gamma-globin gene expression in adult erythroid cells. Knockdown of BCL11A expression reactivates gamma-globin gene expression. We have demonstrated that loss of BCL11A alone in erythroid cells is sufficient to reverse the phenotype of sickle cell disease through the reactivation of fetal hemoglobin. Moreover, the quantitative level of BCL11A expression, and therefore the level of fetal hemoglobin, is controlled through an adult, erythroid-specific enhancer within the BCL11A gene. We are examining the mechanism by which BCL11A functions in the beta-globin complex and are exploring how to interfere with BCL11A expression or function as a new approach to therapy for the hemoglobin disorders. We have identified a potential erythorid-specific enhancer in the BCL11A which is the site of genetic variation seen in GWAS. Through a novel approach of saturating mutagenesis by CRISPR/Cas9 and functional read-out, we have discovered a discrete "Achilles heel" in the enhancer that can be targeted by a single cleavage and NHEJ to disrupt the majority of enhancer activity and BCL11A expression, specifically in the erythroid cell compartment. This discovery forms the basis for gene editing as an improved form of gene therapy for the hemoglobin disorders, which is now moving to clinical trials. Our longterm goal is to identify small molecules that modulate BCL11A and/or gamma-globin gene silencing as an approach that can be applied widely for patients with hemoglobin disorders.

Partial support for this research is provided by grants from the National Institutes of Health.