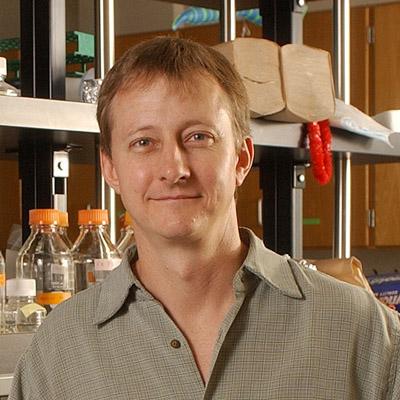 Dr. Jacobsen is a professor of molecular cell and developmental biology at the University of California, Los Angeles.

Steve Jacobsen studies DNA methylation and epigenetic gene regulation processes that play important roles in development, defense against transposons, and genome integrity. His laboratory uses genetics, genomics, and biochemistry in both the model plant Arabidopsis and the mouse. The work focuses on mechanisms by which DNA methylation, histone methylation, and noncoding RNAs converge in a number of overlapping and self-reinforcing pathways to promote stable and heritable gene silencing. Most of our studies of DNA methylation focus on the model plant Arabidopsis thaliana because of its facile genetics, small size, and trim genome. In addition, unlike in most organisms, where DNA methylation mutants are inviable, Arabidopsis can tolerate mutations that virtually eliminate methylation, allowing for detailed genetic studies. Arabidopsis methylation mutants display developmental abnormalities because of defects in the methylation of several key genes that regulate development. We have taken advantage of the stable methylation present at several of these developmental genes to perform saturation genetic screens for mutants affecting DNA methylation. These studies have revealed that DNA methylation is controlled by (1) the specificity of several different DNA methyltransferases; (2) targeting by other chromatin modifications, such as the methylation of histone tails; and (3) targeting of specific DNA sequences by small interfering RNAs (siRNAs) and long noncoding RNAs. In addition, our work has shown that a number of parallel DNA methylation pathways work in a highly overlapping manner to form self-reinforcing loops, which help to explain how DNA methylation can be so incredibly stable from one generation to the next. Work in recent years has focused on one of these pathways, called the RNA-directed DNA methylation pathway. This pathway is driven by small interfering RNAs and involves two specialized DNA-dependent RNA polymerases that are attracted to regions of the genome that already contain epigenetic signals, such as DNA methylation and histone methylation. We are also working toward methods by which this pathway can be targeted to any locus of interest.

We also use the mouse as a model system to study some of the epigenetic silencing mechanisms that are particularly ancient and conserved and that appear to work quite similarly in plants and animals. For instance, our work on the mechanism by which DNA methylation at CG sites is faithfully maintained between generations turned up a factor, called VIM in Arabidopsis and UHRF1 in mammals, that appears to act by directly binding to preexisting CG methylation to signal the DNA methyltransferase to perpetuate this mark after cell division.

A second example is our study of the mechanisms by which DNA methylation signals are translated into gene silencing, which turned up a factor called MORC, and whose function is conserved in plants, worms, and mammals. The MORC genes were initially discovered in an Arabidopsis mutant screen for mutants that cause upregulation of DNA-methylated and silent genes, but that leave DNA methylation intact. We subsequently discovered that mouse MORC1 is required for epigenetic gene silencing of transposons in the male germ line.

We will continue to focus on the mechanisms by which DNA methylation and other epigenetic marks serve to regulate gene expression.

The work on DNA methylation is supported in part by grants from the National Institutes of Health and the Bill & Melinda Gates Foundation.