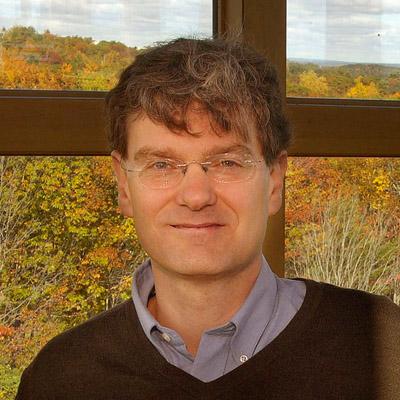 Dr. John is a member of the Mortimer B. Zuckerman Mind Brain Behavior Institute and a Robert Burch Professor of Ophthalmic Sciences at Columbia University.

Simon John's laboratory eulcidates the molecular basis of glaucoma with the aim of developing new therapeutic strategies. They apply a multidisciplinary approach combining molecular, genetic, and physiologic methods to identify genes and molecular mechanisms that underlie this neurodegenerative disease. In collaboration with engineers, they are also developing new minielectronic devices to monitor physiologic pressure and to monitor and manipulate neural activity with the goals of transforming research capabilities and improving patient care.

Glaucoma is one of the most common neurodegenerative diseases. Retinal ganglion cell death and optic nerve degeneration lead to blindness. Harmfully high intraocular pressure (IOP) is a key risk factor for the disorder, but the factors determining IOP and killing of retinal ganglion cells are largely undefined. We use a combination of human and mouse studies to identify both genes and pathophysiologic processes that contribute to glaucoma. We have pioneered the use of mice to study glaucoma by developing mouse models of glaucoma and the tools to study them.

Mechanisms Determining IOP
A major factor limiting the use of mice to study glaucoma is the scarcity of high-IOP mutants. To correct  this, we are collecting a panel of new mouse mutants with altered IOP and glaucoma. We are currently developing more than 25 new mutants. By characterizing these mutants, we will provide valuable insights into the mechanisms determining IOP and leading to glaucoma. For example, we determined that mutations in one gene (Tdrd7) impede the formation of intracellular structures known as stress granules. Our findings suggest that the mutated gene causes increased susceptibility to oxidative stress, resulting in IOP elevation with age. In humans, mutations in the same gene caused cataracts and glaucoma in some patients. Current data also suggest that mutations in this gene alter susceptibility to glaucoma following pediatric cataract extraction. As another example, we determined that mutations in the gene encoding a novel protease (Prss56) cause angle closure glaucoma (ACG) in mice, and ACG with reduced ocular size in human patients. ACG is a subset of glaucoma affecting 16 million people and blinds more people worldwide than any other form of glaucoma. We continue to investigate the normal functions of this gene and its role in disease. 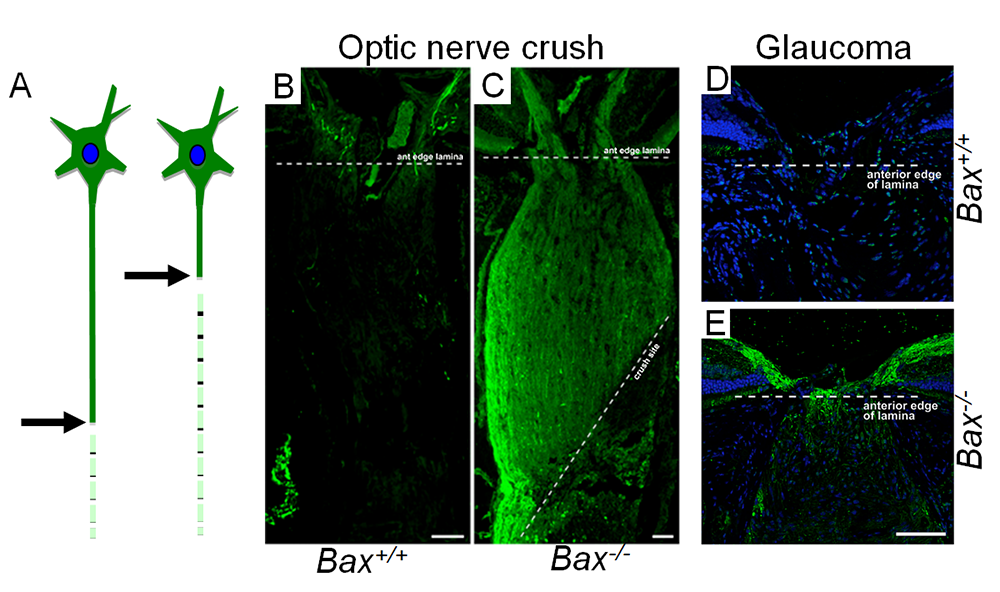 Ocular Drainage Structures and Developmental Glaucoma
Abnormal resistance to aqueous humor drainage through the ocular drainage structures underlies higher IOP in glaucoma, but is poorly understood. We have developed new methods and resources to study drainage structure development, microanatomy and function. We focus on the trabecular meshwork and Schlemm’s canal (SC), with a major focus on SC. We recently discovered that SC is a new class of vessel with features of of both lymphatic and blood vasculature. It is a polarized vessel with lymphatic gene expression being more prominent in its functionally specialzed inner wall. We have characterized various genes that cause developmental glaucoma, including genes for transcription factors (Foxc2, Foxc2, and Lmx1b), bone morphogenetic protein (Bmp4), collagen type IV α1 (Col4a1), and a cytochrome p450 enzyme (Cyp1b1). Mutations in all of these genes cause human glaucoma associated with developmental abnormalities (developmental glaucoma). Despite the developmental abnormalities, and for unknown reasons, IOP usually becomes elevated during young adulthood. We plan detailed characterization of drainage structure development and function in mice with mutations in selected developmental glaucoma genes. These studies will greatly advance our molecular understanding of the mechanisms responsible for elevated IOP. We also characterize modifier genes that modulate developmental glaucoma phentoypes. Importantly, we identified the tyrosinase gene as a modifier whose deficiency exacerbates defects in both Cyp1b1 and Foxc1 mutant mice. Tyrosinase provides L-DOPA (L-3,4-dihydroxyphenylalanine), that protects against the developmental abnormalities. Future work will be aimed at increasing understanding of the role of L-DOPA in ocular development and glaucoma.

Pigmentary Glaucoma
In pigmentary glaucoma (PG), abnormally dispersed iris pigment and cell debris enter the ocular drainage structures, leading to increased IOP. DBA/2J mice develop a form of PG. The glaucoma results from mutations in related genes encoding melanosomal proteins (Gpnmb and Tyrp1). The mutant genes alter melanosomes, allowing toxic intermediates of pigment production to leak from these structures, causing iris disease and subsequent PG. To induce glaucoma, the Gpnmb mutation must also be present in immune cells. Replacing the bone marrow (which gives rise to immune cells) of DBA/2J mice with normal donor bone marrow restored important aspects of ocular immunity and prevented the disease components associated with the Gpnmb mutation. These findings are the first evidence that an abnormal immune response may contribute to development of PG. Not all mouse strains with pigment dispersion are equally susceptible to developing PG. We are characterizing the strain differences that determine whether pigment dispersion leads to high IOP and PG. The genetics of the progression from pigment dispersion to high IOP and PG is complex, involving at least seven loci, and we are working to identify the most important genes.

Neurodegeneration and Neuroprotection
The neurobiology of pressure-induced cell death in glaucoma is poorly understood. DBA/2J mice provide a tractable model for dissecting pathways of cell death in glaucoma and for investigating neuroprotective strategies. Using DBA/2J mice, we determined that distinct degeneration pathways kill the RGC soma and axons. The proapototic molecule BAX is required for RGC death but not for axon degeneration. Resolving a long-standing issue, we experimentally demonstrated that the RGC axon is locally insulted in the optic nerve in glaucoma. The insult occurs within a small and specialized region of the optic nerve head that is rich in astrocytes. This suggests that abnormal neuroglial interactions may be critical in glaucoma.

To better understand the molecular pathophysiology of early glaucoma, we developed an approach that exploits gene expression data to characterize very early stages of this complex disease. We succeeded in characterizing a temporally ordered sequence of glaucoma stages, including stages that precede conventionally detectable damage. Our studies are providing key new insights into glaucoma and identifying potential therapeutic targets. For example, we demonstrated that the complement cascade and endothelin systems are upregulated very early in glaucoma and may contribute to axon injury. Abrogating the function of complement component C1qa is highly protective, highlighting the power of targeting early pathologic events.

Additionally, we discovered that a single radiation treatment profoundly protects DBA/2J mice from developing glaucoma (96 percent of eyes completely protected in the initial study). We are not aware of any other neuroprotective effects this substantial. Localized x-ray irradiation of a single eye is sufficient to protect that eye from glaucoma, but does not protect an untreated fellow eye. Thus, the protective effect is local and not mediated by a circulating factor. We demonstrated that a pathway that enables monocytes to enter tissue is one of the very first pathways activated during glaucoma and that a subclass of monocytes enters the optic nerve prior to axon damage. The radiation treatment alters endothelial cell behavior so that this class of monocytes does not enter the optic nerve. Current data suggest that, in the absence of radiation treatment, the monocytes become damaging and are necessary for initiation and/or propagation of axon injury. Future experiments will test this.