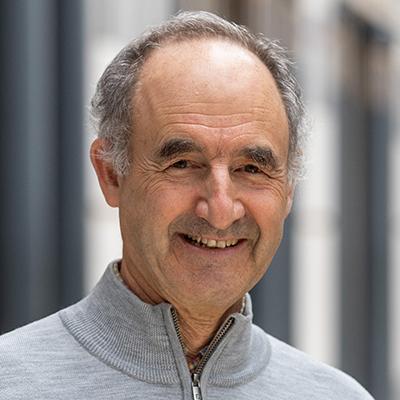 Dr. Zipursky is a professor of biological chemistry at the University of California, Los Angeles, David Geffen School of Medicine.

Larry Zipursky is interested in uncovering the cellular rules and underlying molecular mechanisms by which neurons make highly specific patterns of synaptic connections during development.

Communication between neurons relies on precise patterns of interconnections between them. We are interested in understanding the molecular mechanisms by which these connections, referred to as synapses, are specified. Presumably specific molecular labels on the surface of different neurons provide a basis for the cellular recognition that underlies this specificity. Identifying these labels and understanding how they work is the central goal of my laboratory.

Molecular Strategies Underlying Circuit Assembly
Neural circuits assemble through the highly choreographed presentation of specific extracellular signals and the diverse mechanisms by which these signals are interpreted by different neuronal cell types. Signals can act at long and short range and can attract or repel growth cones of extending axons or dendrites. These signals can act in different combinations and in a graded fashion to sculpt a wide variety of neural circuits. Over the past 15 years, my laboratory has explored the role of a large family of cell recognition molecules, the Dscam1 family, in neural circuit assembly. The large size of the Dscam1 family (~36,000 isoforms) suggested that it might contribute to patterning neural circuitry in a very different way than other previously studied regulators of neural circuit formation. Our studies and those of others indicate that this is, indeed, the case.

Dscam1 proteins endow neurons with a unique cell surface identity, and this, in turn, allows them to discriminate between self and non-self. Each isoform shows striking isoform-specific homophilic binding, and binding between processes in vivo promotes repulsion away from each other. This provides the molecular basis for neurite self-avoidance, a mechanism utilized for patterning axon and dendrites in the peripheral and central nervous system. We have shown that Dscam1-mediated self-avoidance facilitates the segregation of axon branches to different pathways, promotes uniform coverage of receptive fields, and prevents inappropriate combinations of multiple postsynaptic elements at synapses in the fly central nervous system.

Models for Dscam1 function rely on expression of different isoforms in different cells. Expression studies supported the notion that Dscam1 is expressed in a largely random fashion, with different cells expressing different combinations. Clustered protocadherins, a family of isoform-specific homophilic recognition molecules in mammals, which are expressed in a random fashion, also regulate self-avoidance. Thus, a similar molecular strategy to achieve self-avoidance has evolved in flies and mammals in the context of different families of cell recognition molecules.

Dscam1 and two other paralogs, Dscam2 and Dscam4, act in a combinatorial fashion to regulate circuit assembly in different ways in the lamina region of the visual system. Dscam1 and Dscam2 act in parallel to regulate via homophilic repulsive interactions the precise arrangement of dendritic postsynaptic elements of L1 and L2 neurons juxtaposing presynaptic active zones of photoreceptor axon terminals. By contrast, Dscam2 and Dscam4 act in the same pathway in L4 dendrites to mediate selective adhesive interactions with L1 and L2 neurons.

Neural Circuit Assembly in the Medulla Region of the Fly Visual System
The fly visual system is particularly well suited for studying mechanisms of synaptic specificity because of the availability of extensive electron microscopy analysis of the pattern of synaptic connections within the visual system and the large collection of reagents to genetically manipulate many different visual system neurons. In the medulla region of the visual system, a large multilayered structure in the fly brain, these neurons arborize in different layers, restrict dendritic and axonal processes to single or multiple columns within a layer, and form specific patterns of synaptic connections.

We are also studying the molecular strategies and discrete cell-cell interactions regulating targeting of other neurons to specific layers, using a combination of genetic and biochemical techniques in conjunction with two-photon microscopy to follow these events in live animals. These studies reveal a complex interplay between different neurons using a diverse set of cellular recognition molecules and signaling pathways.

While we continue to use forward genetic approaches to uncover mechanisms of synaptic specificity, we have used RNAseq to identify specific cell surface molecules or combinations of them expressed in different neuronal subsets during synapse formation. Closely related neurons with different patterns of synaptic connections express many different cell surface molecules. Neurons may use this molecular complexity to discriminate between the many different potential synaptic targets.

We have recently identified two different Ig superfamily proteins, the Dprs and DIPs, encoding 21 and 9 family members, respectively, as potential candidates for regulating synaptic specificity. These proteins exhibit complex heterophilic interactions between members of the two different families (i.e. paralog-specific patterns of trans-binding of Dprs and DIPs). These proteins are expressed in different synaptic partners. Genetic studies are in progress to critically assess the role of these proteins in regulating the development of synaptic partners in the visual system.

Grants from the National Institutes of Health and the G. Harold and Leila Y. Mathers Charitable Foundation provided partial support for these projects.