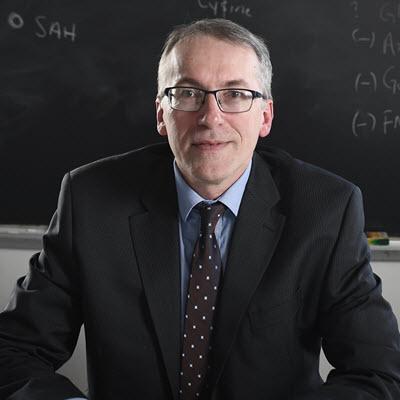 Dr. Breaker is a professor in the Department of Molecular, Cellular and Developmental Biology with a secondary appointment in the Molecular Biophysics and Biochemistry Department at Yale University.

Ronald Breaker is using advanced genomics and molecular engineering technologies to discover how RNA and DNA molecules catalyze reactions and control gene activity in cells, and to exploit these findings to make molecules that can be used in industry and medicine.

Biological systems make extensive use of proteins to catalyze chemical reactions, to monitor biological and environmental signals, and even to form superstructures that define how cells look and function. Although it can be difficult to imagine how modern cells could function without proteins, it is likely that the earliest life forms were managing complex metabolic processes long before proteins had emerged during evolution. The "RNA World" hypothesis is based on the notion that primitive life forms, including the earliest cells, were composed of sophisticated RNA molecules that functioned as receptors (aptamers), control elements (riboswitches), and as enzymes (ribozymes). Unfortunately, the vast majority of these original components of RNA World organisms have long ago become extinct.

The Breaker laboratory seeks to explore the functional capabilities of RNA and DNA to understand better how early life forms might have appeared, and also to determine what roles some of these exotic RNAs might still play in modern organisms. New discoveries, made by examining the forgotten and hidden areas of modern genomes, are beginning to reveal RNA's deeper involvement in the biochemical processes that sustain modern cells, which creates exciting new opportunities for medicine and biotechnology.

Figure 1: The Typical Architecture of Bacterial Riboswitches. Riboswitches usually include an RNA aptamer domain and an expression platform typically found in the 5'-untranslated region (UTR) of messenger RNAs. The aptamer binds binds a metabolite and controls gene expression by modulating the structure of the expression platform. From the Breaker Lab. See also Breaker, R.R. 2012 Riboswitches and the RNA World Cold Spring Harb Perspect Biol 4:pii: a003566.
Figure 2: The Most Common Riboswitch Binds the Coenzyme Thiamin Pyrophosphate. Consensus sequence and structural models for riboswitches that bind thiamin pyrophosphate, a derivative of vitamin B1. From the Breaker lab.
Figure 3: Two Recently-discovered Self-cleaving Ribozyme Classes. Conserved sequences and secondary structures of two newly-discovered ribozyme classes. Arrowheads identify the site of RNA strand scission catalyzed by RNA. From the Breaker lab.

How Nucleic Acids Act as Enzymes
We have established a program to study the basic chemical and structural properties of nucleic acids, which provides a foundation for understanding the more complex properties of RNA and DNA. This knowledge should aid our investigations into the roles that nucleic acids serve in biology, both past and present, and it will allow us to predict how much untapped potential exists for nucleic acid function when these molecules are applied outside the confines of cells. For example, we are continuing our efforts to unify many hypotheses to explain how enzymes that cleave RNA can generate as much as a trillion-fold enhancement over the rate of spontaneous RNA scission.

Our examination of the chemical properties of spontaneous RNA degradation has led us to propose a simple framework for assessing the action of RNA-cleaving enzymes, and to predict the biochemical mechanisms used by newly-discovered ribozyme classes. This effort involves the discovery and study of natural ribozymes, including several new self-cleaving ribozyme we discovered recently. In addition, this effort involves the creation of new ribozymes that can serve as model systems for understanding the catalytic strategies that enzymes can use. Important derivatives of this work also can emerge, such as our discovery of ribozymes that collaborate with riboswitches to yield strikingly complex gene control elements that exhibit Boolean logic functions.

Expanding the Roles of Nucleic Acids
We have used various molecular engineering strategies to create new RNA and DNA molecules that exhibit sophisticated catalytic or molecular sensory functions. For example, the process of Darwinian evolution can be harnessed in the test tube to sift through trillions of nucleic acid sequence variants to identify and optimize new aptamers and ribozymes. We have used this strategy to identify numerous ribozymes that cleave RNA. Surprisingly, even DNA can be made to function as an enzyme, and we have demonstrated this versatility of nucleic acids by creating DNA enzymes or "deoxyribozymes" that catalyze the same reactions used for cloning DNA.

Other engineering strategies also can be used to create novel functional nucleic acids. We have blended test-tube evolution and modular rational design strategies to create a series of ribozyme constructs that operate as precision molecular switches. Given the highly predictable manner in which nucleic acids fold, it is also possible to use computer algorithms to predict RNA sequences that function as molecular logic gates and that can operate in series to create molecular circuitry. These RNA or DNA switches could be harnessed to serve as components of advanced biosensor devices.

Riboswitches Sense Metabolites and Control Gene Expression
One major outcome of our efforts to understand the full functional potential of nucleic acids is the discovery of numerous gene control elements called "riboswitches" (see the figures). Given the ease at which we can use molecular engineering to create new RNA switches, we speculated that modern cells would likely exploit RNA switches for molecular sensing and gene control purposes. Indeed, we have identified numerous metabolite-sensing RNAs that selectively bind their targets and undergo allosteric changes to alter gene expression levels. To search for new examples of riboswitches and other RNAs, we have created a powerful bioinformatics system that identifies noncoding RNAs by analyzing genome sequences. This system has been used to expand the number of known riboswitch classes and to identify other RNAs that appear to have novel biological functions.

Ongoing Studies
My laboratory will combine biological and chemical strategies to explore the functional potential of RNA and DNA, to elucidate the underlying biochemical principles of enzyme and receptor function, and to establish new roles for RNA in cells. Many new opportunities now exist to expand substantially our knowledge of nucleic acid biochemistry and our appreciation for the roles of RNA and DNA in modern organisms. Specifically, we intend to continue to identify and characterize novel RNA gene control elements, and we will explore the potential of these RNA elements to serve as drug targets for the development of new classes of antibiotics. In addition, we will work to make advances in RNA and DNA engineering. With more creative advances in molecular engineering, further high-value molecular tools and model compounds will be produced.