Dr. Siliciano is a professor of medicine at the Johns Hopkins University School of Medicine, with joint appointments in the Departments of Molecular Biology and Genetics and Pharmacology and Molecular Sciences, and Biology (at the School of Arts and Sciences).

Robert Siliciano's laboratory identified the latent reservoir for HIV in resting CD4+ T cells. This reservoir is the major barrier to curing HIV infection and is the focus of an intense international research effort in which Dr. Siliciano's lab plays a key role. 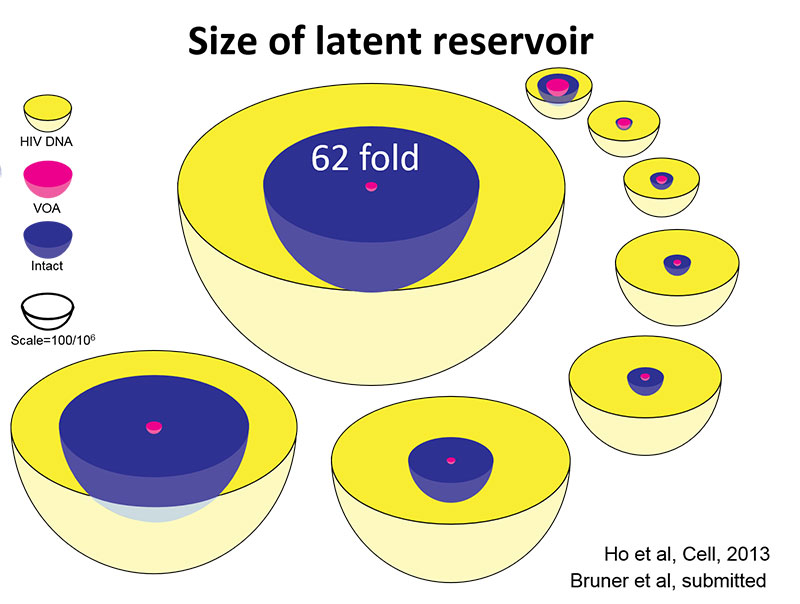 Advances in the treatment of human immunodeficiency virus type 1 (HIV-1) infection with highly active antiretroviral therapy (HAART) have greatly reduced mortality and changed this fatal infection into a treatable chronic disease. HAART can reduce viremia to below the clinical limit of detection, but our work has shown that HAART cannot cure the infection because the virus persists in a very stable latent reservoir in resting memory CD4+ T cells. Because HAART is not curative, treatment of HIV infection is a lifelong challenge. We are interested in understanding HIV-1 persistence and in applying basic studies of viral dynamics to optimizing antiretroviral therapy and the prospects for curing the infection.

Our work on viral persistence began with the idea that the capacity of HIV-1 to establish a state of silent or latent infection at the level of individual cells might provide a mechanism for viral persistence in the face of immune responses and antiretroviral therapy. We hypothesized that HIV-1 might capitalize on a fundamental aspect of the immune system, immunologic memory, to ensure its persistence in the host. At any given time, most of the lymphocytes in the body are in a resting state. When a lymphocyte encounters a bacterial or viral protein that it is programmed to recognize, it becomes activated and begins to proliferate, generating effector cells that eliminate the invading microorganism. Most of these effector cells die, but some survive and return to a resting state as memory cells. These cells persist indefinitely, allowing effective responses to future challenges with the relevant microorganism. HIV-1 preferentially infects activated CD4+ T lymphocytes, and in the process the viral genome is stably integrated into the genome of the host cells. Generally this leads to the production of new virus particles and the death of the infected cell. However, a small subset of the activated CD4+ T cells that are infected survive long enough to revert back to a resting memory state. Because the expression of HIV-1 genes depends on host transcription factors induced in activated T cells, viral gene expression is automatically extinguished when these cells return to a quiescent state. The result is a stably integrated but transcriptionally silent form of the HIV-1 genome in a memory T cell, a cell whose function it is to survive for years in a quiescent state. Upon subsequent reexposure to the relevant HIV antigen, the latently infected cell is reactivated and becomes competent for HIV-1 gene expression and virus production.

In 1995, we demonstrated the presence of latently infected resting memory CD4+ T cells with integrated HIV-1 DNA in infected individuals. The cells are present only at low frequencies, reflecting the fact that most productively infected CD4+ T cells die before they can revert back to a resting memory state. Particularly important is whether this small reservoir of latent virus persists in patients on HAART. In the years following the advent of HAART in 1997, there was considerable optimism that virus eradication might be possible with prolonged treatment, based on analysis of the rapid decay of plasma virus to undetectable levels following the initiation of HAART. However, we and others showed that the frequency of latently infected cells does not decrease even in patients on HAART who have had suppression of viremia to undetectable levels for many years. This finding dashed hopes for eradication of HIV-1 with antiretroviral therapy. Several recent developments have led to renewed optimism that HIV-1 infection can be cured. These include the cure of a single patient with a bone marrow transplantation strategy, the extraordinary effectiveness of HAART in stopping viral replication, and the development of primary cell models and animal models for the analysis of HIV-1 latency.

Our lab is focused on several aspects of research toward a cure. Our basic approach is to find ways to reverse latency in resting CD4+ T cells. This will be done in patients on HAART so that any virus produced will not infect additional cells. The hope is that the infected cells will go on to die from viral cytopathic effects or be lysed by virus-specific cytolytic T lymphocytes. Because the frequency of latently infected cells is very low (approximately one per million resting CD4+ T cells), HIV-1 latency is difficult to study. Transformed T cell lines carrying integrated HIV-1 genomes have provided some information, but the cells that harbor latent HIV-1 in vivo are quiescent and thus are not accurately modeled with transformed cell lines. Thus most of our work in involves cells isolated from patients. We are interested in practical issues related to clinical trials of HIV cure such as how to promote the killing of infected cells once latency is reversed and how to accurately quantify the size of the pool of persistent virus in patients on HAART. In a separate but related series of studies, we are exploring the pharmacodynamics of antiretroviral drugs. Previous studies from our group have demonstrated that a novel form of cooperativity is a key factor in the efficacy of several classes of antiretroviral drugs. We are using mathematical models to help clinicians choose optimal regimens of antiretroviral drugs for patients with wild type and drug resistant HIV-1.

This research has received support from the National Institutes of Health, the Foundation for AIDS Research, and the Bill and Melinda Gates Foundation.