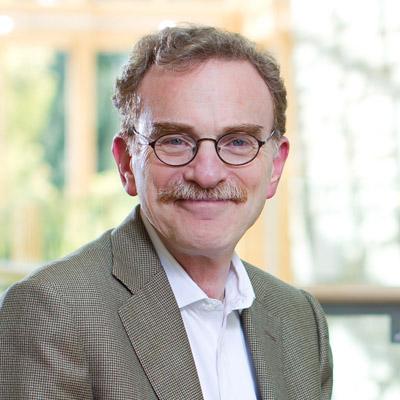 Randy Schekman's research is focused on the process of membrane assembly, vesicular transport, and membrane fusion among organelles of the secretory pathway.

Our research is devoted to a molecular description of the process of membrane assembly and vesicular traffic in eukaryotic cells. Basic principles that emerged from these studies in yeast are now being applied to studies of genetic diseases of protein transport.

A combination of genetic and cytologic evaluation of the secretion (sec) mutants has allowed a description of the secretory pathway in Saccharomyces cerevisiae. Protein transport in yeast appears to be mediated by the same organelles and proteins that operate in mammalian cells. Molecular cloning analysis of SEC genes revealed striking structural and functional homology with corresponding mammalian genes.

Vesicle Transport Early in the Secretory Pathway
We have developed biochemical assays that measure the early events of polypeptide translocation into the endoplasmic reticulum (ER) and of vesicle-mediated protein transport from the ER to the Golgi apparatus. Transport of secretory and membrane cargo proteins is mediated by diffusible vesicles. The formation of these vesicles in vitro depends on the Sec proteins that were predicted to be involved from genetic and morphological inspection of sec mutant cells. Isolated transport vesicles contain membrane and internal proteins that are targeted to other compartments in the cell, but they are nearly devoid of proteins that are located in the ER. Thus the budding mechanism somehow distinguishes transported from ER-resident proteins. This sorting and budding process is highly evolutionarily conserved; mammalian equivalents of the yeast Sec proteins have been isolated and are known to operate in the same location within the cell.

Vesicles formed in the transport reaction have an electron-dense, 10-nm coat structure that consists of the Sec proteins (Sar1p, Sec23/24p, and Sec13/31p) required in budding. This coat (COPII) resembles another coat complex (COPI) that creates transport vesicles within the Golgi apparatus. Our working model is that the Sec protein subunits of the COPII coat bind to the ER membrane and recruit cargo molecules into a cluster that then dimples the membrane to form a bud. A direct interaction between one of the COPII subunits, Sec24p, and membrane proteins is implicated in the capture of cargo proteins. This capture results in the concentrative sorting of membrane and secretory proteins, the latter being selected by an indirect interaction mediated by various membrane receptor proteins that link the coat to soluble cargo proteins. Fission of the bud from the membrane separates transported from resident proteins.

In addition to a role in cargo selection, the COPII coat is responsible for the membrane shape change that accompanies vesicle budding. Liposomes formulated with phospholipids representative of a yeast ER membrane fraction bind the COPII proteins in the same sequence of events and with the same nucleotide dependence as observed with native ER membrane. Furthermore, COPII buds and vesicles form on the surface of the liposome and capture solute from the interior of the liposome. Other coat protein complexes (clathrin and COPI) display similar budding activity on synthetic membrane liposomes.

Movie: COPII proteins recognize and capture membrane proteins (green) destined for transport from the endoplasmic reticulum (ER), but not membrane proteins (red) designed to remain in the ER. The process begins with the conversion of Sar1-GDP (D) to Sar1-GTP (T) by a transient interaction with the ER-localized GDP/GTP exchange factor, Sec12. Sar1-GTP embedded in the ER membrane recruits the heterodimer Sec23/24 to form a prebudding complex that samples membrane proteins in the ER, interacting specifically with proteins that contain a transport signal. Prebudding complexes are then collected into a patch by a heterotetrameric scaffold protein, Sec13/31, which completes COPII coat assembly by pinching a piece of membrane to enclose coat and cargo molecules en route to the Golgi complex. COPII vesicle fission from the ER separates Sar1-GTP from Sec12, which favors GTP hydrolysis on the vesicle and causes Sar1-GDP and the coat subunits to be shed from the membrane surface.

Graphic prepared by David Madden, in the Schekman lab.

Vesicle Traffic Late in the Secretory Pathway
Little is known about the mechanism of sorting and packaging of secretory proteins that transit from the Golgi complex to the cell surface. Although some proteins use clathrin to traverse the endosome en route to the plasma membrane, others do not, and, until now, the general view has been that the direct path out of the trans-Golgi network (TGN) may involve tubular carriers formed without the intervention of coat proteins. To examine this limb of the secretory pathway, we have examined two membrane proteins: a biosynthetic enzyme, chitin synthase III (Chs3p), and a mating cell fusion protein, Fus1p, which travel from the TGN/endosome membrane to the plasma membrane in yeast.

Genetic and biochemical analyses have now shown that Chs3p and Fus1p are conveyed from the TGN by a novel coat protein complex we call exomer. The exomer is a large, ~1-MDa complex that binds membranes in the presence of a GTP-activated form of Arf1p, a small GTPase implicated in other coat protein assembly events. Recently, we discovered a novel exomer sorting signal in the cytoplasmic C-terminal domain of Fus1 that directs traffic from the TGN to the cell surface. Unlike other coats, however, exomer is responsible for the traffic of a nonessential set of surface proteins.

Alternative coat proteins may guide secretion and membrane traffic from the TGN to the cell surface in metazoan cells. Although exomer genes are not found outside of eukaryotic microorganisms, the mammalian genome encodes 29 Arf and Arf-like GTPases, several of which are localized to the TGN membrane. We are screening these genes to examine their role in protein traffic from the TGN.

Traffic in Human Genetic Diseases
Sec23a has been implicated in a rare craniofacial disorder (CLSD) that causes various skeletal defects. The CLSD mutation maps to a residue on the surface of Sec23a that is away from contact with the membrane. Although the mutation, F382L, produces a conservative substitution, the effect of the allele on primary fibroblasts cultured from patients is profound, with a substantial distortion of the ER reminiscent of the original and lethal sec23-1 of yeast. Humans have two paralogs of Sec23 (a and b), but cultured fibroblasts and calvarial osteoblasts, which may be responsible for the skeletal effects in CLSD patients, express only one copy, Sec23a. We have established a vesicle-budding reaction reconstituted with mammalian COPII proteins and ER membranes to explore CLSD and other unique features of human membrane protein traffic. Using pure recombinant proteins, we found that the CLSD mutation interferes with the binding and assembly of a scaffold complex, Sec13/31, which normally builds upon the inner coat of Sar1p and Sec23/24p.

Sec24 is responsible for membrane cargo protein sorting into COPII vesicles. Mammals have four Sec24 paralogs, each of which may be responsible for the recognition of different cohorts of cargo proteins. One dramatic example has been elucidated in collaboration with David Ginty's lab (HHMI, Johns Hopkins University School of Medicine). Ginty's lab has characterized a chain-terminating mutation early in the mouse gene encoding Sec24b that turned up in a screen for mutants defective in neural tube closure. In collaboration with Ginty, we have discovered that a signaling receptor, Vangl2, required in the establishment of planar polarity in the neural epithelium, fails to be trafficked in the Sec24b mutant. Thus, Sec24b appears to be responsible for an unusually restricted range of cargo molecules, none of which are essential until fairly late in embryonic development. Other paralogs of Sec24 may display quite different roles in development and physiologic function.

Membrane proteins implicated in familial forms of Alzheimer's disease (FAD) are substrates for vesicular trafficking, and defects associated with protein transport may play a role in the pathology of AD. Presenilin 1 (PS1) is an essential subunit of an enzyme, γ-secretase, that serves important roles in the maturation of proteins involved in signaling and development. However, mutant forms of PS1 cause unscheduled processing of amyloid precursor protein (APP) to generate an amyloidogenic peptide that accumulates in brain neuritic plaques that are characteristic of AD. Surprisingly, the PS1 mutations that potentiate the action of γ-secretase on APP are spread throughout the molecule, including in domains exposed to the cytoplasm, to the lumen of the ER or extracellular space, and within the membrane bilayer. These alleles may produce forms of PS1 that fold improperly and retard the traffic of γ-secretase. Such impaired traffic could influence the transport and proteolytic processing of APP. Our current work is focused on the role of the early endosome as a station for aberrant processing of APP.

A grant from the National Institutes of Health provided partial support for our work on the traffic of membrane proteins from the trans-Golgi compartment in yeast.