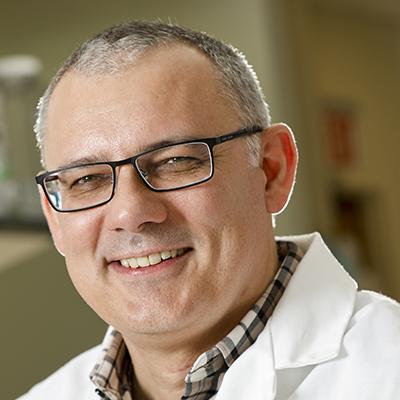 Dr. Bieniasz is head of the Laboratory of Retrovirology at the Rockefeller University.

Paul Bieniasz explores retrovirus-host interactions, focusing on how HIV-1 and other retroviruses replicate in cells and whole organisms. His research advances knowledge of the molecular interplay between viruses and their hosts, and how it influences their coevolution.

Our research focuses on the molecular biology of retroviruses. Although the retrovirus life cycle is conceptually simple, there is much complexity in the way that retroviruses interact with host cells. Retrovirus-host interactions occur in two ways: First, retroviruses extensively parasitize host cell processes in order to replicate. Second, organisms have evolved functions to specifically inhibit colonization of their genomes by retroviruses.

Our overall goal is to understand the mechanics of biological processes that accompany retrovirus replication and how the evolution of hosts and retroviruses has been influenced by their interactions, and to exploit this knowledge to develop better animal models of human retroviral disease. Most of our work centers on human and simian immunodeficiency viruses (HIV, SIV), but we also study other model retroviruses (e.g., murine leukemia virus [MLV]) and retroviral "fossils"—extinct, defective "endogenous" retroviruses that are preserved in mammalian DNA because they infected germline cells in the ancestors of modern organisms.

Figure 1: HIV-1 particle retention by tetherin. The upper panel shows an electron micrograph of virions trapped at the surface of a tetherin-expressing cell infected with a Vpu-defective HIV-1. Inset, apparent virion-to-virion, as well as virion-to-cell, tethering in the presence of tetherin. The lower panel shows models depicting how tetherin might induce the retention of HIV-1 particles. Upper panel from Neil, S.J. et al. 2008 Nature 451:425–430. © 2008 Nature Publishing Group.
Figure 2: Reconstruction of a biologically active form of an extinct human retrovirus, HERV-K. Electron micrographs of virus particles assembling at the surface of cells expressing the structural proteins of the reconstructed HERV-K. Scale bars in the upper and middle panel, 500 nm; scale bars in the lower two panels, 100 nm. From Lee, Y.N., and Bieniasz, P.D. 2007 PLoS Pathogens 3(1): e10. doi:10.1371/journal.ppat.0030010.

Retrovirus Particle Genesis
Among the most complex processes in retrovirus replication is the construction of new infectious retrovirus particles from their component parts. The retroviral Gag protein has intrinsic particle-forming ability, and expression of Gag in permissive cells, in the absence of other viral proteins, is sufficient to generate immature virus-like particles. Specific cellular functions are also required to generate extracellular virions. For example, we and others have shown that short peptide motifs encoded within the Gag protein of HIV-1 and other retroviruses recruit an array of host proteins, including ubiquitin ligases and components of the class E vacuolar protein-sorting pathway.

With Sandy Simon, a colleague at Rockefeller we previously developed imaging techniques to visualize HIV-1 particle assembly using fluorescently tagged Gag proteins and total internal reflection microscopy. We succeeded in visualizing individual particles assembling, enabling view of the dynamics of virion assembly that was unprecedented for any virus. By elaborating this approach we could quantifying the recruitment of several ESCRT proteins during the assembly of HIV-1 and also successfully imaged HIV-1 genomic RNA (gRNA) by tethering GFP molecules to it. We found that HIV-1 gRNA was highly dynamic, and that Gag caused gRNA molecules to dock at the membrane and nucleate viral assembly.

While imaging provided unique insights into virion assembly dynamics, it could not provide molecular details required to answer outstanding questions about how HIV-1 gRNA is selected for incorporation into virions. We developed crosslinking-immunoprecipitation-nextgen sequencing (CLIP-seq) methods to determine in molecular detail how Gag binds viral and cellular RNAs. Uniquely, we coupled CLIP-seq to sub-cellular fractionation, and applied CLIP-seq to virus particles. We found that profound changes in the RNA-binding specificity of Gag are triggered during virion assembly and that the need to selectively package viral RNA may provide the impetus for the unusual nucleotide composition exhibited by HIV-1.  A striking finding in our CLIP assays was that matrix highly selectively binds to ~10 specific tRNAs. A role for this interaction is being investigated.

Intrinsic and Innate Immunity to Retroviruses
Another major interest is the identification and characterization of cellular factors that govern retrovirus host range. For many years, the host range of any given retrovirus was thought to be governed solely by its ability to parasitize the particular array of host molecules (e.g., receptors, transcription factors) provided by a candidate host cell. We now know, partly through our own work, that mammalian host cells are equipped with several proteins that specifically inhibit retrovirus replication; these proteins are equally critical determinants of host range. Among these antiviral factors are the TRIM5 proteins that inactivate incoming retroviral capsids and the APOBEC3 family of cytidine deaminases that infiltrate assembling virions and hypermutate nascent viral DNA during the subsequent cycle of reverse transcription. HIV-1 and SIVs avoid or antagonize TRIM5 and APOBEC3 through capsid sequence variation or, in the case of APOBEC3, by encoding an antagonist, Vif. We work both on the molecular mechanisms by which these antiretroviral proteins act and on how they impact retroviral host range and evolution.

We discovered a new host defense molecule, which we have termed tetherin. that can cause nascent enveloped viral particles to become trapped at the surface of infected cells. Using various approaches, we defined the major features of how tetherin traps virions. We demonstrated that the HIV-1 Vpu and (in collaboration with Theodora Hatziioannou) SIV Nef accessory proteins are tetherin antagonists and used various approaches to show how tetherin and its antagonists interact. With collaborators, we found that Vpu and Nef likely acquired, lost, and reacquired Tetherin antagonist function during cross-species transmissions in the viral lineage that ultimately emerged in humans as the HIV-1 pandemic. We also generated Tetherin knockout and transgenic mice, enabling the demonstration that tetherin can inhibit the replication of MLV in vivo.

Tetherin represents one example of hundreds of interferon-simulated genes (ISGs) that may exert direct antiviral activity. Type-1 interferons (IFNa/b) IFNa/b is known to inhibit multiple steps in retroviral replication and are recognized to induce a cellular ‘antiviral state’, whereby the replication of many viruses is inhibited. Precisely how (IFNa/b) achieves its effects is not well understood. Thus, to fully explain how IFNa/b inhibits retroviruses we are conducting screens to identify novel ISGs with antiretroviral activity, and determine how they work.  this approach led us to identify Mx2 as an interferon-induced inhibitor of primate lentiviruses. We have found that Mx2 appears to inhibit the capsid-dependent nuclear import of HIV-1 DNA, and that nuclear pore localization is required for Mx2 antiretroviral activity and is a specific feature of primate Mx2 proteins. Moreover, ancient diversifying selection pressures acting on the N-terminal portion of the Mx2 protein appear to have driven variation in antiviral specificity in primates. Currently we are undertaking a detailed examination of how Mx2 inhibits primate lentivirus nuclear import.

Paleovirology, Viral and Host Evolution
Because of their role as an antiretroviral viral defense, TRIM5, APOBEC3, Mx2 and tetherin genes exhibit hallmarks of genes that have evolved under strong diversifying selection pressure. Specifically, interspecies sequence comparisons reveal unexpectedly high rates of nonsynonymous mutation, suggesting that these genes have been selected for greater antiviral efficiency against different viruses in different host species. Additionally, although these proteins were discovered as a result of their activity against HIV and SIV, it is likely that they evolved, in part, to antagonize ancient retroviruses that are now extinct.

To try to understand how retroviruses and host defenses have coevolved, we mine genome sequences that contain a fossil record of ancient retroviruses for evidence of reciprocal coevolution of retroviruses and their hosts, and instances of retroviral extinction by host defenses. For example, we completely synthesized a consensus, pseudoancestral genome of an extinct human retrovirus, HERV-K(HML-2). This reconstructed virus, unlike any of the fossilized remnants that are present in modern human genomes, is capable of infection in cultured cells. We have undertaken a number of investigations of this and other extinct viruses, including an analysis of sensitivity to host antiviral proteins.

In other studies of variation of host resistance factors, we uncovered a striking example of convergent evolution in the TRIM5 gene in primates, that illustrate how seemingly unlikely evolutionary events can be less improbable than they might intuitively appear. Moreover, drastic changes in TRIM5-coding potential impact the sensitivity of the primate host species to ancient and modern retroviruses and can have important practical consequences for the development of animal models of retroviral diseases.

Better Animal Models of Human AIDS
Our work on intrinsic and innate immunity to retroviruses, particularly on species-specific variation in TRIM5 and APOBEC3 proteins, has suggested that it might be possible to engineer HIV-1 strains with expanded tropism. Specifically, the generation of HIV-1 strains that can replicate in monkeys would be of enormous practical benefit and would likely revolutionize preclinical studies of HIV-1 drugs and vaccines. By engineering and adapting specific components of HIV-1 (the capsid and Vif proteins) to avoid or inactivate TRIM5 and APOBEC3 host resistance factors, we successfully derived simian cell tropic HIV-1 strain (stHIV-1). Unlike wild-type HIV-1, which cannot replicate in macaque cells, stHIV-1 replicates robustly in macaque cells, in vitro. With our colleague, Theodora Hatziioannou (Aaron Diamond AIDS Research Center), and collaborators Vineet KewalRamani and Jeffrey Lifson (National Cancer Institute, Frederick, MD), we have developed stHIV-1 variants that can cause AIDS in macaques yielding an animal model that recapitulates many of the characteristics of human HIV-1 infection. We are also developing a small animal (mouse) infection model using chimeric viruses in which antibody mediated protection against HIV-1 infection can be studied and evaluated.

Grants from the National Institutes of Health, the Elizabeth Glaser Pediatric AIDS Foundation, and the American Foundation for AIDS Research provided support for this work.