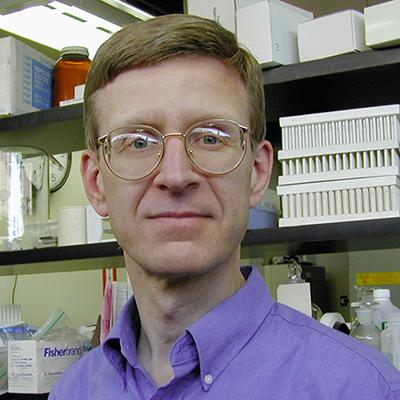 Dr. Ahlquist is Paul J. Kaesberg Professor of Molecular Virology and Oncology at the University of Wisconsin-Madison, and John and Jeanne Rowe Chair in Virology at the Morgridge Institute for Research.

Our research integrates studies of selected RNA, DNA, and reverse-transcribing viruses. The results are defining molecular pathways and host interactions by which viruses replicate and cause disease, and revealing functional and likely evolutionary links uniting a surprisingly wide range of viruses.

Three-Dimensional Organization of a Viral Mini-organelle for RNA Replication
Positive-strand RNA [(+)RNA] viruses, the largest genetic class of viruses, include many serious human pathogens. All (+)RNA viruses replicate their genomes in association with intracellular membrane rearrangements such as single- or double-membrane vesicles, but many questions remain about how and why these viruses use membranes in RNA replication.

Recently we found multiple parallels between the intracellular, membrane-associated replication complexes of some (+)RNA viruses and the extracellular, membrane-enveloped infectious particles (virions) of two other virus classes, reverse-transcribing viruses such as HIV and double-strand RNA (dsRNA) viruses (Figure 1). To further define the nature of these parallels, we used electron microscope tomography and complementary approaches to provide the first three-dimensional analysis of an RNA replication complex.

We found that viral RNA synthesis localizes inside virus-induced, ~50-nm, vesicular membrane invaginations, with striking similarities to budding retrovirus virions (Movie 1). The interior of each vesicle is connected to the cytoplasm by a necked channel of ~10 nm diameter, large enough to import ribonucleotide substrates and to export product RNA (Movie 2). Tomographic, biochemical, and other results showed that each vesicular complex contains, on average, three RNA replication intermediates and an interior shell of ~100 copies of a single, self-interacting viral RNA replication protein.

Thus, viral RNA replication occurs in virus-induced mini-organelles that organize replication factors and protect replicating RNAs from competing processes and host defenses, such as RNA interference. The results appear relevant to many other (+)RNA viruses, and support and extend the earlier parallels that we found with reverse-transcribing and dsRNA virus virions. Thus, three of the six major classes of viruses share similarities in the form and function of their replication complexes and may have evolved from common precursors, supporting a significant unification across virology. Other results suggest that the dependence of these processes on membranes, on high-level multimerization of viral replication proteins, and on other features may provide useful targets for developing potentially broad-spectrum antivirals.

Host Functions in Viral Replication and Control
Because viral genomes are typically 10,000 to 100,000 times smaller than the human genome, most or all steps of virus infection depend on exploiting host gene functions. Identifying such host genes is currently a crucial frontier in understanding infection. These host genes also are attractive targets for viral control, since they are not subject to the high mutation rates by which viruses escape from antivirals targeted against their own genes.

Previously we used advanced model systems to conduct the first systematic, genome-wide analysis of host factors in virus replication. Recently we and our collaborators extended similar studies to influenza virus, which kills hundreds of thousands of people during average years and millions of people worldwide during pandemic years. To identify host factors required by influenza virus, we used RNA interference, a powerful genetic technique, to inhibit expression of each host gene in turn and to test the effects of each gene on influenza virus replication. We conducted these studies in Drosophila cells. RNA interference is particularly effective in these cells, and their relatively small genome reduces phenotypic masking by redundant gene functions.

We also recently identified host functions important for the replication of two other major human pathogens. Hepatitis B virus (HBV) chronically infects ~400 million people (>6 percent of humanity), causing liver disease and most cases of liver cancer, the third leading cause of cancer death worldwide. We found that membrane envelopment and budding of infectious, DNA-containing HBV virion particles at an intracellular secretory compartment requires host functions involved in the multivesicular body pathway, which had been implicated in the budding of some RNA-containing viruses from the cell surface. Modulating this host pathway thus inhibits multiple viruses, including HBV.

In another project we used mutational approaches to discover that HIV's ability to establish its gene expression program depends on host sulfonation pathways that add sulfate-containing groups to selected small molecules and proteins to modify their functions. These results reveal a previously unknown regulatory step of HIV replication, define a new function for sulfonation in nuclear gene expression, and provide potentially valuable new targets for therapy against HIV/AIDS.

Papillomavirus Infection and Oncogenesis
Human papillomaviruses (HPVs) cause essentially all cervical cancers (the leading cause of cancer death for women in developing countries), 20-25 percent of head/neck cancers (the fourth most common cancer in men worldwide), and other cancers. The HPV life cycle is tightly linked to epithelial cell differentiation, which has greatly restricted experimental production of HPV virions. To overcome these restrictions, we developed a system for high-yield, differentiation-independent generation of infectious particles containing wild-type, mutant, or chimeric HPV genomes. Using this system, we recently found that successful HPV infection requires that recipient cells enter the mitotic phase of the cell cycle, in which the nuclear membrane breaks down. This dependence has important implications for pathways of HPV infection and control and explains why HPV only infects the actively dividing, basal layer of skin cells.