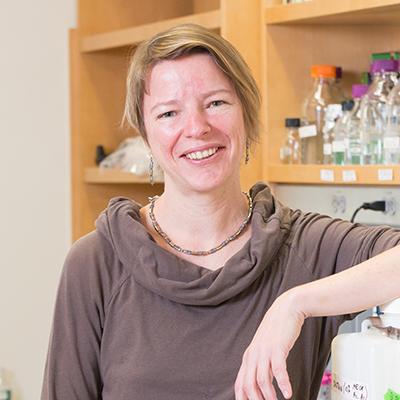 Dr. Boudker is an associate professor of physiology and biophysics at Weill Cornell Medicine.

As soon as a neuron in the brain communicates with a neighboring neuron by releasing a burst of the neurotransmitter glutamate, those molecules must be cleared away rapidly to shut off the signal and ready cells for the next communication. Glutamate transporters handle this task, bringing the neurotransmitter back inside cells so effectively that there can be a million times more glutamate inside the cell than outside. Olga Boudker's work is revealing how this happens.

Studying a closely related transporter from bacteria, Boudker captured a detailed structure of the protein in its inward-facing state, in which its glutamate-binding region would be exposed to the interior of a cell. Boudker studied the structure and compared it to the protein's outward-facing state, then proposed that the glutamate transporter operates like an elevator, with a large portion of the protein gliding back and forth inside a membrane-embedded scaffold as it shuttles its cargo.

The model was entirely different from how other transporters were known to function. But within a few years, real-time single-molecule imaging spearheaded by Boudker's lab had confirmed that model.