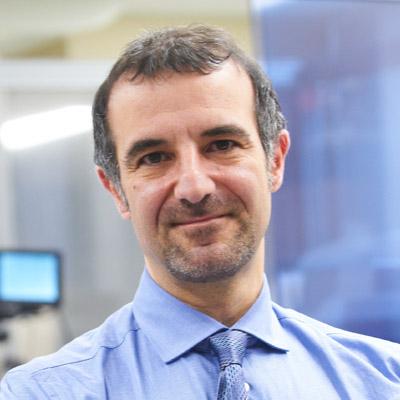 Dr. Pavletich is a member and chair of the Structural Biology Program at Memorial Sloan Kettering Cancer Center.

Nikola Pavletich is interested in understanding the maintenance of genomic integrity and the control of cell growth, two processes central to cancer. His research has focused on the structures and mechanisms of proteins that sense, signal, and repair DNA damage and on the mTOR growth regulatory pathway.

DNA Damage Response
Genetic alterations can arise from DNA damage caused by environmental or endogenous agents and also from the DNA transactions during replication. To guard against these lesions, the cell has evolved specialized pathways that sense, signal, and repair them. Simple lesions, such as single-base modifications, can be sensed directly and repaired either by direct reversal enzymes or by excision followed by the copying of the missing information from the complementary strand. Lesions affecting both DNA strands, such as DNA double-strand breaks (DSBs) and interstrand crosslinks (ICLs) present additional challenges, as the missing information has to be copied from the sister chromatid by homologous recombination (HR). These lesions elicit a signaling response characterized by cell cycle arrest, chromatin changes, and activation of HR.

The DNA damage response is an integral part of DNA replication. It is initiated by stalled or collapsed replication forks resulting from encounters with unrepaired DNA damage, unresolved replication intermediates, or from replication stress induced by oncogenes. A key component of the signal is the persistence of ssDNA that is coated with RPA, the major ssDNA protein in the cell. RPA has multiple roles ranging from removing secondary structure and protecting ssDNA to regulating and coordinating ssDNA-processing factors. For example, RPA-ssDNA mediates the recruitment and activation of the ATR checkpoint kinase that activates the DNA damage response, and it also regulates the DNA2 nuclease-helicase that processes Okazaki fragments, stalled replication forks and DSBs.

Figure 1: DNA2 nuclease-helicase structure and mechanism of RPA controlling cleavage polarity. Left, intact DNA2 with ssDNA bound inside the central tunnel. Right, schematic of DNA2 (orange) displacing RPA (blue spheres) at a 5’ end of ssDNA (top) but not a 3’ end (bottom). Adapted from Zhou, C. et al. 2015 eLife 2015;4:e09832.
Figure 2: FANCI-FANCD2 structure. Composite figure shows the molecular surface representation of the FANCI-FANCD2 structure, colored by electrostatic potential, with the dsDNA molecule (yellow cartoon) and ssDNA path (yellow spheres) inferred from the 7.8 Å electron density maps of FANCI-ss/dsDNA crystals, and models of the corresponding DNA on FANCD2 based on the alignment of the DNA-binding grooves of the two paralogs. The black lines overlaid on the figure illustrate two replication forks that have converged onto an interstrand crosslink (thick black line). Adapted from Joo, W. et al. 2011 Science 333:312-316.
Figure 3: FAN1 structure and mechanism of ICL unhooking.  Left, FAN1 bound to a 5’ phosphorylated nick with opposing 3’ flap. Right, scheme showing FAN1 can keep excising 3+/-1 nucleotide segments distributively as long as there is a complementary 3’ flap (top). Once it reaches and unhooks the ICL (thick black line), it can make a small number of excisions before the ssDNA gap gets too long for FAN1 binding, as a complementary flap presumably won’t exist past the ICL (bottom). Adapted from Wang, R. et al. 2014 Science 346:1127-1130.
Figure 4: Structure of the mTOR-mLST8 complex. The mTOR FRB domain (red) restricts access to the active site of the PIKK kinase domain (pink), while also providing a substrate recruitment site that coincides with the rapamycin-binding site (green). Gold, mLST8; light blue, the FAT domain characteristic of PIKKs; sticks, the ATP transition-state analog bound at the active site. Adapted from Yang, H. et al. 2013 Nature 497:217–223.

DNA2 has ssDNA endonuclease and 5’ to 3’ helicase activities, both of which require a free DNA end. In vitro, DNA2 cleaves both the 5’ and 3’ DNA ends, but in vivo RPA limits cleavage to the 5’ end. To help understand the multiple functions of DNA2 and their regulation by RPA, we determined the crystal structures of the DNA2-ssDNA complex, an RPA-ssDNA complex, and a DNA2-RPA subcomplex. The structures, in conjunction with biochemical data, show that RPA recruits DNA2 to the 5’ end of the ssDNA through a flexibly tethered interaction. The initial recruitment facilitates a secondary DNA2-RPA interaction that partially competes with RPA-ssDNA interactions. As a result, RPA’s grip on the 5’ end of the ssDNA is weakened, and the ssDNA starts threading through a juxtaposed DNA2 tunnel containing the nuclease active site (Figure 1). This model helps explain how RPA limits cleavage to the 5’ end, as at a 3’ end or internal segment of ssDNA the secondary interaction will not release an end that can thread through the DNA2 tunnel. Our findings also helped shed light on the DNA2 5’ to 3’ helicase activity, which was thought to allow it to track along the ssDNA while cleaving it. In the structure, the nuclease domain is ahead of the helicase domain in the 5’ to 3’ direction of translocation, precluding tracking. We find the helicase is instead needed for bypassing the RNA-DNA primer of Okazaki flaps. Current work on DNA2 is aimed at understanding the DSB resection activity of DNA2-RPA.

Following DSB resection, the 3’ ssDNA gets coated by the RAD51 recombinase, a step that requires the breast cancer susceptibility protein BRCA2. The RAD51-ssDNA filament then binds to donor double-stranded (ds) DNA, searches for homology, and catalyzes strand exchange, the key reaction in recombination. In earlier work, we had found that BRCA2 binds to the resected DSB, recruits RAD51 and facilitates the nucleation of RAD51-ssDNA filament formation by displacing RPA, the rate-limiting step. To address the mechanism of strand exchange, we determined a series of crystal structures of minifilaments of RecA (the prokaryotic RAD51 homolog) bound to the ssDNA substrate in a presynaptic complex, or to the heteroduplex strand-exchange product in a post-synaptic complex. We are currently working on determining the structure of a key reaction intermediate, the RecA-ssDNA-dsDNA synaptic complex, but in its absence we have a rough model from mutational data. Movie 1, based on the two structures and a model of the synaptic complex, illustrates key mechanistic aspects of HR. In the presynaptic structure, RecA holds the ssDNA in a conformation that resembles the dsDNA product, with the edges of the bases exposed for homology sampling by the incoming DNA. In the synaptic model, the donor dsDNA is melted locally by stretching and unstacking, freeing one of its strands for homology sampling through Watson-Crick pairing. In the postsynaptic structure where complementary strands have exchanged, the new heteroduplex is stable and the reaction is irreversible. On ATP hydrolysis, a heteroduplex is released if strand exchange was successful. Otherwise, the filament re-forms and samples homology with the donor duplex at a new register.

Repair of ICL lesions requires, in addition to HR, the Fanconi anemia (FA) pathway that is activated when a replication fork encounters an ICL. ATR then phosphorylates and activates the downstream FANCI-FANCD2 (ID) complex, leading to its monoubiquitination by a seven-protein FA complex and the recruitment of nucleases that excise the ICL. Our research in this area has focused on the function and activation of the ID complex, and on the mechanism of ICL excision. The structure of the ID complex revealed two large basic grooves, one on each protein, that could accommodate dsDNA, and adjacent narrower basic grooves that could accommodate ssDNA. We confirmed these DNA-binding activities with in vitro biochemistry and by determining a low-resolution structure of a FANCI-dsDNA-ssDNA complex. This led to the model that the complex recognizes DNA structures arising from the collapse of two replication forks converging onto an ICL (Figure 2). In current work, we are addressing this model structurally by reconstituting a complex that has been activated by phosporylation and ubiquitination.

Once the ICL is sensed, the ID complex recruits a number of nucleases to excise the crosslink. To address the mechanism of ICL excision, we determined the structure of the Fanconi-Associated Nuclease 1 (FAN1). In conjunction with biochemical data, the structure shows that the nuclease accesses the DNA at a site that has a 5’ phosphorylated nick and a complementary 3’ flap (Figure 3). It then makes successive incisions at every ~third nucleotide starting at the 5’ nick with concomitant closure of the 3’ flap. The reaction is distributive, and continues as long as 3’ flap closure can reconstitute the substrate. Our biochemical and structural data suggested that FAN1 can make dual incisions flanking the ICL, essentially excising it by skipping over the lesion, which we confirmed using an ICL synthesized using a Click-chemistry approach.

The mTOR Growth Regulatory Pathway
The mammalian target of rapamycin (mTOR) pathway senses a wide range of environmental cues, including nutrients, energy, oxygen levels, and growth factors. In response, it regulates many growth-related processes, such as protein synthesis, metabolic output, survival, and cytoskeletal organization. mTOR is a phosphoinositide 3-kinase related protein kinase (PIKK) of ~2500 residues. It forms two complexes, mTORC1 and mTORC2, that have distinct input signals, modes of regulation and downstream targets. They also differ in their susceptibility to rapamycin, an antiproliferative macrolide that forms a ternary complex with FKBP12 and the FRB domain of mTOR. Rapamycin is mTORC1 specific and was thought to inhibit the kinase allosterically.

We have determined the crystal structure of a truncated mTOR containing the PIKK domain and the helical solenoid region, termed FAT domain, shared by other PIKK family members. The kinase active site and catalytic mechanism turned out to be remarkably conserved with canonical protein kinases. The structure, in conjunction with biochemistry, also indicated that the kinase is in an intrinsically active conformation. This suggested that mTOR is not regulated through the conformational change of the activation-loop typical of canonical kinases. Instead, the structure suggested that the active site is controlled by restricted access. Access is hindered by the FRB domain and a helix that is part of a previously identified inhibitory segment. These and other elements result in a deeply recessed catalytic cleft between the kinase N and C lobes, which are clamped in place by the FAT domain. Hyper-activating mutations, initially isolated from yeast screens but now also found in cancer, map either to the structural elements that hold the inhibitory helix and FRB in place, or to the FAT sites that clamp onto the kinase.

The rapamycin-binding site of the FRB is located at the entrance of the catalytic cleft, and this prompted us to test whether it is a substrate recruitment site. This would explain why this site is highly conserved, how bone-fide substrates access the restricted site, and the very limited sequence conservation of phosphorylation sites. In published work, we found that the isolated FRB domain inhibits substrate phosphorylation in trans, and mapped a putative recruitment motif to a 15 amino acid amphipathic helix immediately following the phosphorylation site of a substrate. Our findings thus indicate that FKBP12-rapamycin inhibits both directly, by blocking a substrate recruitment site, and indirectly, by further restricting active-site access. In ongoing work, we have determined the structure of the isolated FRB domain bound to a recruitment motif peptide, and are currently addressing the regulation of mTOR by the subunits of the mTORC1 complex.