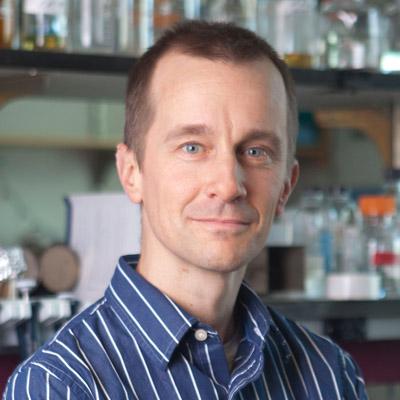 Dr. Laub is an associate professor of biology at the Massachusetts Institute of Technology. He was an HHMI early career scientist from 2009 to 2015.

Michael Laub studies the design principles of biology's information-processing systems. His research team is solving mysteries about how bacteria can detect and respond to a bewildering array of internal and environmental conditions, integrating information from hundreds of signaling pathways, all while managing to avoid getting those signals crossed.

Much of his team's work focuses on two-component signaling systems. Most bacteria have dozens or even hundreds of these systems, each with a sensor protein that monitors conditions outside the cell and a partner protein that controls how the cell responds to environmental changes. Rather than studying these two-component signaling pathways individually, Laub undertook a major effort to study all of the two-component systems present in one bacterium simultaneously; the findings offered a new view of the molecular basis for pathway specificity, how cells coordinate multiple pathways, and how new pathways evolve.

His group will take a similar approach as they explore how toxin-antitoxin systems found throughout the bacterial kingdom regulate bacterial growth. Some species produce dozens of these systems, in which toxins are held inactive until a signal or stressor triggers degradation of the antitoxin, freeing the toxin to suppress cell growth while stressful conditions persist.