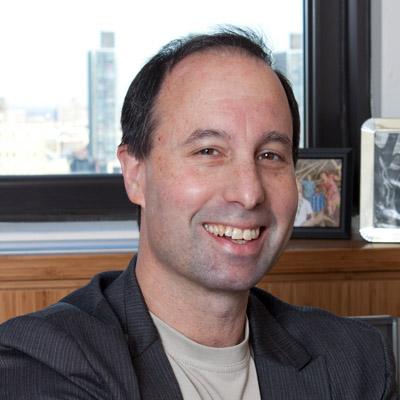 Dr. Shadlen is a professor of neuroscience at Columbia University.

Michael Shadlen studies neurons in the association cortex that process information from the visual cortex to give rise to interpretations, decisions, and plans for behavior. His experiments combine electrophysiology and behavioral and computational methods to advance our knowledge of higher brain function.

The evolution of higher brain function has given us the capacity for flexible decision making. The evidence we obtain through our senses (or from memory) need not precipitate an immediate, reflexive response. Instead our decisions are deliberative and provisional, contingent on other sources of information, long-term goals, and values. Our laboratory measures and manipulates the electrical impulses from neurons in the brains of animals as they make decisions. The combination of electrophysiology, behavioral and computational methods allows us to ascertain the neural mechanisms responsible for simple forms of reasoning and decision making. I believe these rudimentary mechanisms are the building blocks of human cognition.

Our experiments begin to clarify neural mechanisms that support integration of evidence from diverse sources, assign more or less weight to cues that differ in their reliability, calculate expected costs and benefits associated with anticipated outcomes, process elapsed time to meet a deadline or to assess temporal cost, and implement rules (such as deciding on what to decide upon) and policies (e.g., balancing accuracy against speed). Almost all these mechanisms, which can be studied most effectively in nonhuman primates, require processing on a flexible time scale much longer than the time scales imposed by the biology of nerve cells. Cellular events, such as an ion channel opening to allow current to flow or a neuron exciting or inhibiting another neuron, take a fixed length of time, typically hundredths of a second. To make decisions, in contrast, our brains operate in a flexible time frame, dictated neither by moment-to-moment fluctuations in sensory information nor the need to control our muscles in real time. Such freedom from immediacy (Movie 1) is an essential element of many functions that we call cognitive, such as working memory, planning, anticipating, inferring cause and effect, and resolving ambiguity.

Interestingly, the neural computations that support decision making, incorporate the kind of mathematics of probability that a statistician would use to accumulate evidence bearing on an hypothesis, or that an actuary would apply to assess risk (Movie 2). Our lab's studies of perceptual decision-making show that the same neurons that can hold a value in working memory can also represent a variety of different values. They do not merely switch between a low and a high rate of firing but instead compute and represent graded amounts of information. During decision-making, these amounts correspond to a degree of belief that one alternative is better than another. In other contexts, these same neurons represent plans for action, allocation of attention, or anticipation of an event or cue.

The capacity of neurons – or more likely groups of interacting neurons – to manifest such persistent activity appears to be a common feature of the primate association cortex. Our experiments suggest that the computations made by these neurons comprise the basic neural building blocks of cognition. The study of decision making exposes other building blocks as well: mechanisms that sense that a neural firing rate has reached a criterion level establish this criterion, start and stop processes, and turn on or select or configure another brain circuit. We know more about some of these mechanisms than others, but we can already appreciate the generic necessity for such operations in cognition.

Indeed, the sophisticated mental capacities of humans can be explained in large part by our having a bigger brain with more of these building blocks. Besides deciding what to do next, human brains also decide about the kinds of things to decide about. A cascade of operations with features like those involved in simple perceptual decisions probably underlies our capacity to strategize, form abstract ideas, and express ourselves through recursive grammar. This is the structure of thought: cascades of decisions about decisions about decisions.

At its most abstract, decision making invites consideration of philosophical concepts, such as personal responsibility, conscious awareness, and authorship of our ideas and actions. Moreover, I believe that the neural mechanism of decision making will ultimately serve as a basis for understanding human consciousness. Simply put, consciousness can be understood as a decision to engage information in a certain way. When we wake from sleep, our brains make a nonconscious decision to engage the world. They decide to ignore the sound of rain or traffic but to attend to the baby’s cry. Subjective awareness, volition, and authorship rely on a decision to engage in another way – for purposes of possibly reporting an experience by pointing, recalling, or telling about it.

Consider a brain process that does not simply look to the visual cortex for evidence bearing on the possibility of grasping, looking, reaching, eating, mating, or other actions, but instead engages this information with a possibility of reporting to someone else. This process imbues objects with a phenomenal presence in a reference frame that is shared by other agents with similar minds. Similarly, a nonconscious decision to store information to be retrieved for possible reporting involves systems that tag information with before, after, and context—the stuff of autobiographical, episodic memory.

Thus we are beginning to appreciate the many ways that the neurobiology of decision making has exposed mechanisms that are likely to figure prominently in human cognition. These mechanisms – integration of information (evidence), process termination, circuit selection – explain how simple decisions are formed in the brain. They also supply the rudiments of complex cognitive functions, which at first glance seem unrelated to decision making.

These core functions make a normal brain "not confused": able to reason, prioritize, infer causes and consequences, assign authorship to one’s own thoughts, explore, avoid distractions, and engage with the environment. Brain disorders affecting cognition have many causes, including genetic mutation, ischemia, infection, degeneration, autoimmune processes, developmental errors, trauma, and environmental toxins. I believe, though, that these causes ultimately affect cognitive function by inducing failures of a small set of fundamental mechanisms like the ones listed above and others to be discovered. If so, restoring these mechanisms will prove key to future treatments of a wide variety of brain diseases.