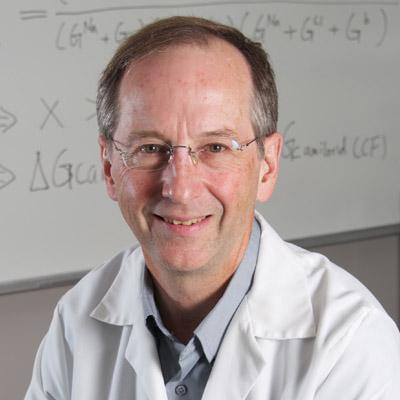 Michael Welsh's research focuses on cystic fibrosis and airway epithelia and on ASIC channels and acidosis in neuronal function. His laboratory performs fundamental investigation and carries the work to humans.

Cystic Fibrosis and Airway Epithelia
Cystic fibrosis (CF) is a common, lethal genetic disease caused by mutations in the gene encoding the CF transmembrane conductance regulator (CFTR). CFTR is an anion channel located in the apical membrane of epithelia, where it mediates transepithelial salt transport. Our lab is interested in the mechanisms that control CFTR gating, how mutations disrupt CFTR function, the pathophysiology of airway disease, and the development of new therapies.

CFTR dysfunction. The most common CF-associated mutation is deletion of phenylalanine at residue 508 (CFTR-ΔF508). This mutation causes CFTR retention in the endoplasmic reticulum (ER) and subsequent degradation, and it decreases the rate of channel opening. Our discovery that a reduced incubation temperature allows some CFTR-∆F508 to escape the ER and reach the cell surface, where it retains partial activity, sparked efforts to understand the responsible mechanisms and target the defect pharmacologically. We are using biochemical and electrophysiological methods to understand how altered CFTR-ΔF508 structure disrupts processing and gating.

Pathogenesis of CF airway infection. Bacterial airway infections cause most CF morbidity and mortality. In earlier work, we discovered that a soup of antimicrobials in airway surface liquid defends the lung. When this defense is breached, bacteria develop into biofilms, which makes them resistant to antibiotics and prevents their eradication. Our lab is pursuing a basic understanding of the mechanisms of pulmonary host defense, interactions between bacteria and the host, and novel strategies to prevent and treat airway infection.

A porcine model of CF. The initiation and evolution of disease in CF organs remain poorly understood. Unfortunately, mice with targeted CFTR gene alterations fail to develop disease typically found in humans. To generate a new CF model, we chose pigs because, when compared to mice, their anatomy, biochemistry, and physiology are more similar to those of humans. Using homologous recombination, we disrupted the CFTR gene in primary fibroblasts and collaborated with Randall Prather (University of Missouri) for somatic cell nuclear transfer to generate CFTR–/– pigs. These animals exhibit defective Cl– transport and develop meconium ileus (an intestinal obstruction), exocrine pancreatic destruction, and focal biliary cirrhosis, replicating abnormalities seen in CF babies (Figure 1). Like the lungs of humans with CF, their lungs appeared normal at birth. We also introduced the ∆F508 mutation into the porcine CFTR gene. Except for mice, these are the first gene-targeted mammals produced to model a human disease. They offer an exciting opportunity to test, for the first time, key hypotheses about pathogenesis, to study the common CF mutation, and to develop new therapeutic strategies.

We are pursuing several key questions about pathogenesis, including the role of defective electrolyte transport and abnormal airway surface liquid, and the chicken and egg conundrum about whether inflammation or infection comes first in CF lungs. Our data also suggest that the structure of mucus is abnormal in CF, and we are focusing on the responsible mechanisms.

Although we can treat meconium ileus with surgery, we are using transgenic and outcrossed pigs to take several novel approaches to circumvent the obstruction. The results should inform us about the pathogenesis of meconium ileus and help us identify genetic modifiers that affect disease severity and/or processing of ∆F508 protein. We will also ask whether CFTR expression in utero prevents disease in newborns and whether expressing CFTR will treat established airway disease. The answers will guide therapeutic strategies.

Airway epithelia. Airway epithelia are covered by motile cilia, which propel mucus from the lung. In contrast to motile cilia, primary cilia are sensory organelles containing a variety of receptors. Because motile and primary cilia share some molecular features, and because our data indicate that they share disease-associated features, we asked whether classic motile cilia also function as sensory organelles. We found that airway epithelial cells express bitter taste receptors that are localized on motile cilia (Figure 2). Bitter compounds increase intracellular Ca2+ concentration and stimulate ciliary beating. Thus, airway epithelia contain a cell-autonomous system in which motile cilia both sense noxious substances and initiate a defensive mechanical mechanism to eliminate the offending compound. Hence, like primary cilia, classical motile cilia contain sensors to detect the external environment. We are pursuing the biochemical and physiological consequences of these structures and are testing the implications for airway disease in mice and humans.

ASICs and Their Regulation by Extracellular pH
Acid-sensing ion channels (ASICs) are non-voltage-gated cation channels formed from homo- and heterotrimers of ASIC subunits. They are activated by a reduced extracellular pH. In peripheral neurons, they contribute to mechanosensation and nociception. In central neurons, they and their associated proteins localize in dendritic spines and contribute to synaptic plasticity.

Although most seizures stop spontaneously, the molecular mechanisms that stop them remain unknown. However, seizures are known to reduce brain pH, and acidosis has been suggested to inhibit seizures. Because ASIC1a is exquisitely sensitive to extracellular pH, we hypothesized that acidosis might activate ASIC1a to terminate seizures. We found that ASIC1a does not affect seizure threshold or onset, but it shortens seizure duration and prevents progression. CO2 inhalation, long known to lower brain pH and inhibit seizures, also requires ASIC1a to interrupt seizures. Acidosis activates inhibitory interneurons through ASIC1a, suggesting that ASIC1a might limit seizures by increasing inhibitory tone. These findings provide some of the first insights into the mechanisms terminating seizures.

ASIC1a chemosensory function in the amygdala. ASIC1a is particularly abundant in fear circuit structures, especially the lateral amygdala, and is required for normal fear behavior, which suggested that the amygdala might detect a reduced pH.We found that inhaling CO2 reduced mouse brain pH and evoked fear behavior. Eliminating or inhibiting ASIC1a impaired this activity, and localized ASIC1a expression in the amygdala rescued the CO2-induced fear deficit of ASIC1a-null animals. Reducing amygdala pH reproduced the effect of CO2.These data identify the amygdala as an important chemosensor that detects hypercarbia and acidosis and initiates behavioral responses. They also give a molecular and anatomical explanation for how rising CO2 concentrations elicit intense fear and provide a foundation for dissecting the bases of anxiety and panic disorders.

We are investigating three important questions. First, what is the role of ASICs in determining the response to pH? Second, how does CNS pH change with neural activity? Third, what are the neuropsychiatric consequences of variations in human ASIC or other genes involved in pH control and response? Answering these and related questions will provide a better understanding of pH-dependent signaling in the brain and its contribution to anxiety, panic disorder, and other neuropsychiatric conditions.

This research is also supported by the National Heart, Lung, and Blood Institute and the Cystic Fibrosis Foundation.