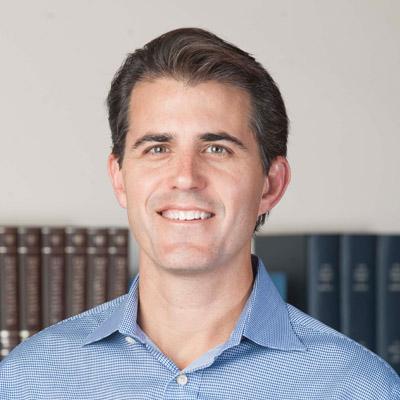 Dr. Dyer is chair and member of the Department of Developmental Neurobiology at St. Jude Children's Research Hospital. Dr. Dyer was an HHMI early career scientist from 2009 to 2013.

Michael Dyer takes advantage of the experimental tractability of the retina to identify key molecular and cellular mechanisms that coordinate proliferation and differentiation during development. He then uses the power of mouse genetics to elucidate the underlying mechanisms.

The mammalian central nervous system (CNS) is made up of a diverse collection of neurons that are produced from multipotent progenitor cells in a precise temporal and spatial order. My studies on the retina have revealed that the retinoblastoma (Rb) family of proteins plays a critical role in coordinating proliferation and differentiation during retinogenesis.

In general, neuronal proliferation is strictly prevented in the mammalian CNS to avoid the devastating consequences of degeneration and cancer. I have discovered, however, that the Rb family is necessary to prevent differentiated retinal horizontal neurons from proliferating and from forming retinoblastoma. This discovery holds great potential for uncovering fundamental mechanisms that maintain neuronal homeostasis and mediate neurodegeneration, tumorigenesis, and neuronal regeneration.

Individual neuronal populations from the retina can be purified and induced to form iPSCs (induced pluripotent stem cells) by expression of the four Yamanaka factors (Oct3/4, Sox2, Klf4, c-Myc). Alternatively, the individual neuronal populations can be used for somatic cell nuclear transfer (SCNT) to produce embryonic stem cells (ESCs). Once the individual iPSC and ESC lines are cloned and characterized, the three-dimensional culture system developed by Yoshiki Sasai (RIKEN Center for Developmental Biology, Kobe, Japan) is used to differentiate them into retina. With this system we can start with a purified retinal neuron population, reprogram the neuron to an immortalized cell population (iPSCs or ESCs), and then differentiate it again into retina. For some neuronal populations, they can then be functionally integrated back into the retina in vivo.

Preliminary studies have suggested that the Rb family helps to coordinate chromatin-based epigenetic processes (histone modifications and ATP-dependent chromatin reorganization) with proliferation, cell fate specification, and differentiation during retinal development. Different classes of retinal neurons exhibit distinct chromatin changes as they differentiate, and these changes correlate with the ability of some neurons to proliferate without dying or to undergo degeneration under stress.

My goal is to investigate the connection between the Rb family of proteins and chromatin changes that occur during neurogenesis and how these processes contribute to cell-type–specific susceptibility to cancer and degeneration. These experiments will serve as a foundation for future efforts to induce neurogenesis and treat human neuropathies without the need for progenitor cells. Our studies may also contribute to our understanding of cancer by defining factors that make some cells more susceptible to tumorigenesis than others.