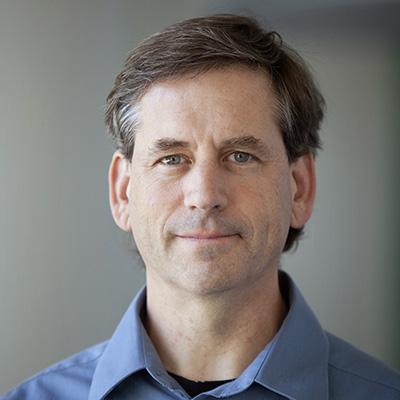 Dr. Brainard is a professor of physiology and psychiatry at the University of California, San Francisco.

Michael Brainard investigates the neural mechanisms that enable learning, and how those mechanisms differ across individuals and over the life span to give rise to variation in the capacity for learning. As a model, he uses behavioral, neurophysiological and genetic approaches to study vocal learning in songbirds.

Research in my lab focuses on the general question of how experience acts on the nervous system to shape behavior. Our goal is to account for learning by understanding the sensory stimuli that drive change, how and where those stimuli are represented in patterns of neural activity, and how those patterns act to modify behavior. We hope both to reveal general learning mechanisms, and to understand how variations in those mechanisms give rise to individual differences in behavior. Hence, we are interested in how the nervous system changes over the course of development to give rise to critical periods for learning, and how innate variations between individuals interact with experience to give rise to differences in learned behaviors. Toward this end, we employ a variety of behavioral, neurophysiological, and genetic approaches to investigate vocal learning in songbirds. 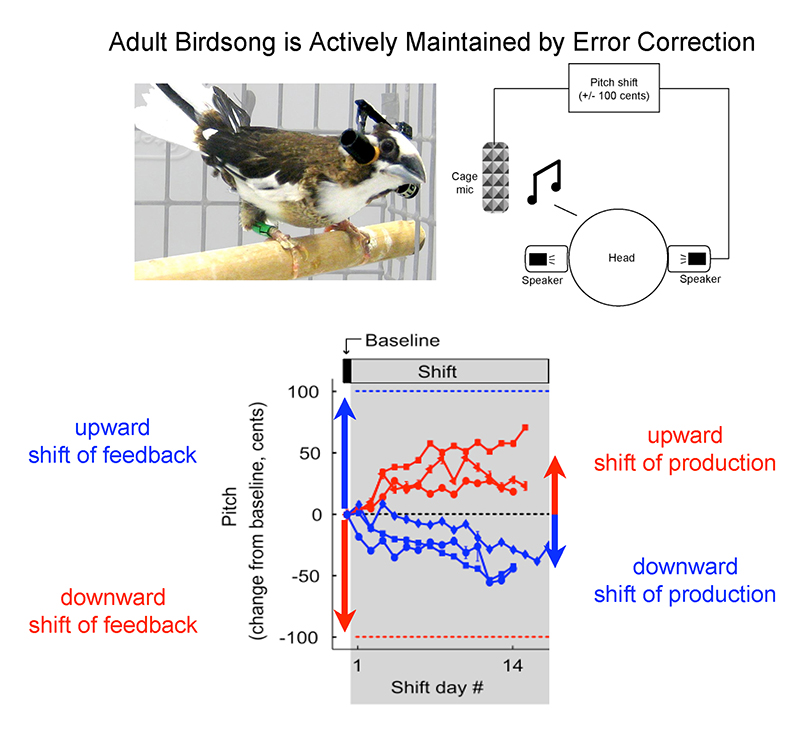 We study vocal learning in songbirds because it is a quantifiable natural behavior that exhibits a variety of general features of vertebrate learning, and it is enabled by a well-elucidated and accessible set of brain regions. Song learning includes both perceptual and sensorimotor learning components. During perceptual learning, young birds listen to and memorize the song of an adult "tutor."  Subsequently, during sensorimotor learning, they use auditory feedback to gradually refine their initial "babbling" vocalizations so that they progressively resemble the previously memorized tutor song. In many species this learning is limited to an early critical period and is also strongly influenced by social interactions. These features make song learning a rich model for studying the mechanisms that contribute to sensory and sensorimotor learning in general, and to certain components of human language learning; speech acquisition exhibits strikingly similar requirements for memorization and vocal practice during early development, and for maintained auditory feedback throughout life.

How Does Sensory Feedback Shape Behavior?
We quantitatively characterize song behavior and how it is shaped by auditory feedback in order to understand the "rules" that govern learning, and to inform investigation of underlying neural mechanisms. We have developed novel computerized systems for precise real-time monitoring of song, and controlled and reversible manipulation of feedback. This has enabled us to demonstrate real-time influences of auditory feedback on song production that parallel similar influences on human speech. We have also used such systems to provide differential feedback that reinforces a subset of naturally occurring vocalizations, and to show that such feedback can rapidly drive precise, adaptive changes to normally stable adult song. Ongoing experiments are further testing how song is shaped by auditory feedback. These experiments provide insight into the role of feedback in vocal learning and a precisely controlled behavioral context in which we can examine underlying neural mechanisms.

How is Feedback About Performance Encoded in the Brain?
To characterize neural signals that enable learning, we use chronic neural recordings from singing birds. This allows us to characterize how neurons encode the sensory feedback experienced by the singing bird and the information available within the nervous system to direct learning. In order to understand how such feedback signals drive vocal change, we also need to understand how the structure of song is encoded in premotor activity. We therefore use recordings to determine the relationship between neural activity and song structure, and how this activity changes over the course of learning.

What is the Role of Basal Ganglia Circuitry in Feedback-dependent Learning?
Basal ganglia circuits play a crucial but poorly understood role in motor control and learning. The basal ganglia circuitry that subserves song learning forms a discrete set of nuclei specialized for one well-defined behavior. Therefore, this circuitry may prove a particularly tractable system for elucidating the nature of signals present in basal ganglia more generally and how they contribute to the learning and modification of motor acts.

Our previous work has demonstrated a striking dissociation between the importance of avian basal ganglia circuitry for production versus plasticity of song. In adult birds, lesions of the output nucleus of this pathway (nucleus LMAN [the lateral magnocellular nucleus of the anterior neostriatum]) have little overt effect on the structure of song, but prevent plasticity of song in response to perturbations of feedback. These data demonstrate that the premotor circuitry for learned song does not reside in the basal ganglia but indicate that this circuit plays a crucial role in enabling performance-based feedback to drive changes to song. Our subsequent experiments suggest that frontal-basal ganglia circuits contribute to motor learning by: (1) introducing variability in behavior that constitutes "motor exploration," (2) monitoring outcomes associated with different behavioral variants and, (3) directing motor output towards behavioral variants that give rise to better outcomes. In ongoing experiments, we are using recording and manipulation of neural activity of the basal ganglia circuitry in singing birds to elucidate further the mechanisms whereby this pathway contributes to learning.

What Factors Contribute to Individual Differences in Complex Phenotypes Such As Learning Ability?
While our prior work has described general features and mechanisms that characterize song learning, we have noted that there is striking variation across individuals in the quality of learning. Such behavioral differences provide a powerful starting point for investigating why the capacities for learning and other complex phenotypes differ across individuals and across the lifespan. This has motivated design of experiments that are intended to address how individual differences arise in the capacity for learning, and in the developmental regulation of learning.

Our approach is to precisely quantify phenotypic differences across individuals in song structure and song learning and to correlate these with underlying genetic differences. To accentuate phenotypic variation, we have generated a hybrid population by cross-breeding distinct species of finches. This population exhibits significant heritable variation in song phenotypes, as well as other complex traits (such as plumage). To understand the underlying basis of this variation we use high-throughput sequencing to generate genetic markers for parental strains to map genetic determinants of different phenotypes.

Our broad agenda with this line of experiments is to further develop songbirds as a model system in which we can examine genetic determinants of complex behavioral traits, with a particular interest in understanding individual variation in learning. Advantages of studying these issues in the songbird are that (1) song learning exhibits general features of relevance to human learning and cognition, (2) song behavior is precisely controlled and highly quantifiable so that phenotypes can be characterized with precision, and (3) the underlying neural substrates for production and learning of song have been extensively elucidated, so that knowledge gained from this approach can be placed in the context of a well-understood neural circuit. A challenge is that songbirds are not a conventional "genetic system." Hence, although the zebra finch genome has recently been sequenced, one goal of our approach is to leverage modern sequencing in order to cheaply and efficiently carry out behavioral genetics in a system that has previously been an attractive model for its other strengths. Our expectation is that through these experiments we will gain specific knowledge about genetic contributions to complex behavioral traits, but also that we will test an approach that may be viable for other "non-genetic" model systems.