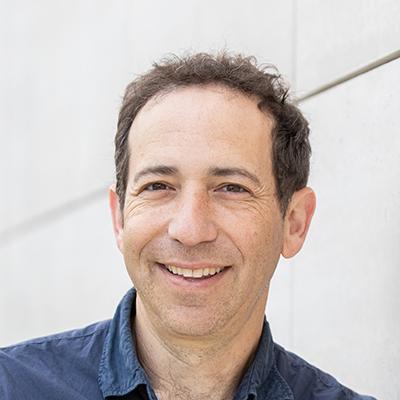 Dr. Elowitz is a professor of biology, bioengineering, and applied physics at the California Institute of Technology.

Michael Elowitz seeks to understand how core cellular capabilities such as communication, decision-making, and epigenetic memory are implemented by molecular circuits of interacting genes, proteins and other biomolecules. The lab combines the engineering of synthetic circuits with analysis of natural circuits, usually at the level of individual cells. Projects aim to improve our ability to predictably control cellular behaviors, and provide a foundation for a new generation of cell-based biomedical devices.

Molecular "circuits" of interacting genes, proteins, and other biomolecules generate many of the most astonishing abilities and behaviors of living cells. They allow cells to communicate with one another, process signals in their environment, remember past events, and make decisions. Molecular biology and genomics have provided us with information about the components of these circuits, and their interactions. Nevertheless, the design principles that govern circuit architecture usually remain mysterious. Why has one circuit architecture been selected over another? What minimal circuit designs are sufficient to implement a given behavior?

In electronics, understanding circuit design principles has enabled us to produce complex and powerful devices. A comparable level of understanding of genetic circuit design principles could allow more rational and predictable control of living cells and tissues, and provide the foundation for programming custom behaviors in cells, enabling a new generation of cell-based biomedical therapies and devices.

To discover these principles, the lab combines three synergistic approaches: First, we use synthetic biology approaches to design, construct, and rewire genetic circuits in cells. Second, we use time-lapse movies and quantitative image analysis to follow the dynamics of genetic circuits in individual cells. These single-cell approaches are critical because many circuit behaviors that appear sharp in individual cells are obscured by traditional techniques that average over heterogeneous cell populations. Finally, we use mathematical modeling to formulate and understand genetic circuit design principles. While we first developed these approaches in simpler microbial systems, the lab has increasingly brought them to more complex mammalian cell types and focused on circuits that are critical for multicellular behaviors.

Figure 1: Mouse embryonic stem cells analyzed by single-molecule FISH. A colony of mouse embryonic stem cells. Cell membranes have been stained and individual mRNA molecules (small dots) can be identified and counted using single-molecule mRNA-FISH. Images like this enable quantitative analysis of the gene expression states and dynamic behaviors of individual stem cells. Credit: Zakary Singer
Figure 2: In response to stress, Bacillus subtilis cells differentiate into a variety of alternative phenotypes. Here, green cells grow and divide, while one cell, labeled in red, transiently differentiates into a genetically competent state, where it can exchange DNA with other cells. At the same time, other cells differentiate into dormant spores (white). Movies of this process revealed how excitable gene circuits use noise to enable cells to differentiate in a probabilistic and transient fashion. From Süel, G.M. et al. 2006 Nature 440:545–550. © 2006 Nature Publishing Group.
Figure 3: The Notch signaling pathway enables direct communication between neighboring cells. Here, signal-sending cells express a fluorescent protein fused to the Notch ligand Delta (shown in red), while receiving cells contain a reconstituted Notch pathway that expresses green nuclear localized fluorescent protein (green nuclei) in response to signals. The response of individual receiver cells to neighboring sender cells can be analyzed using time-lapse movies. These and other experiments revealed that the Notch pathway can behave like a walkie-talkie, allowing cells to send or receive but not to do both efficiently at the same time. From Sprinzak, D. et al. 2010 Nature 465:86–90. © 2010 Nature Publishing Group.
Figure 4: Gene expression is inherently noisy. These cells express two fluorescent proteins, one shown in red, the other in green. Both genes are controlled by the same promoters; therefore, if gene expression were deterministic, all cells would have equal amounts of red and green (and therefore appear yellow). The presence of cells that are more red than green, or vice versa, results from stochastic fluctuations (noise) in gene expression. Analysis of images like this enabled the Elowitz lab to detect noise in individual cells and measure its properties. From Elowitz, M.B. et al. 2002 Science 297:1183–1186. © 2002 American Association for the Advancement of Science.

Epigenetic Memory
One of the most fundamental capabilities of living cells is memory, the ability for a stimulus to establish a gene expression state that can be stably maintained over multiple cell generations. In the cell, such epigenetic memory is controlled by a diverse set of chromatin regulators that chemically modify chromatin at specific sites. In recent work, we have begun to address fundamental design questions about this system: How does an individual gene respond, dynamically, to different types of chromatin regulators? Why are so many different regulators necessary? How unique, or redundant, are their regulatory capabilities? And, what unifying principles can help explain and predict the operational capabilities of this system?

We address these questions from the bottom up, by recruiting chromatin regulators to a target gene, and following their dynamic effects in individual cells using time-lapse movies. Recent data have pointed to a unifying model in which diverse types of silencing chromatin regulators transition genes stochastically from an active state into reversible and irreversible silent states. The model further suggests that chromatin silencers effectively implement a distinct type of regulation (‘duration-dependent fractional control’) in which cells can use the duration of recruitment of a regulator to modulate the fraction of cells in a population in which the gene is on or off. At the same time, different regulators appear to operate in quite different regimes, providing different types or timescales of memory to cells.

Design Principles of Intercellular Signaling Systems
Mammalian cells communicate with one another through a handful of developmental signaling pathways, such as Notch, TGF-β, Wnt, Hedgehog and others. These pathways are molecularly well-characterized, function in virtually all tissues, and represent major targets for drug development. Nevertheless, we generally do not understand what unique signaling capabilities each pathway provides, why it has its own specific molecular architecture, and how it will respond to perturbations (e.g. from specific pharmacological inhibitors). To address these questions, we reconstitute minimal versions of core pathways, and study their behavior quantitatively in individual cells.

One example is the Notch signaling pathway, which enables direct cell-cell communication and is dysregulated in many diseases. We have analyzed the conditions that determine whether cells can send or receive signals through this pathway, and are currently focused on understanding how cells control “addressing” of signals, i.e. to to whom (to what other cell types) they are sending signals, or from whom they are receiving. We are also working on understanding the content of signals, i.e. whether and how cells can send distinct messages to one another through the same set of receptors. In more recent work, we are extending this build-to-understand paradigm to additional developmental signaling pathways.

Time-Based Regulation
In many cellular systems, input signals modulate the concentration of a regulatory protein in the cell or nucleus, which in turn modulates the activity or expression of its targets in a graded fashion. While this paradigm remains central, time-lapse movies are leading to the realization that many regulatory proteins operate in a fundamentally different, and far more dynamic, way. These proteins tend to activate in a series of stochastic “pulses.” In each pulse, many molecules of the regulatory protein suddenly become active for a brief period of time, and then deactivate. Input signals can change the rate, duration, or other characteristics of these pulses. In this way, these systems are effectively controlled in time, i.e. through the fraction of time they are active, rather than (or in addition to) their concentration.

We have discovered different types of time-based regulation, and we are working to understand the unique functional capabilities that this mode of regulation provides. For example, in yeast, we found that frequency-modulated (FM) pulsing in the calcium signaling system, mediated by the Crz1 transcription factor, enables a transcription factor to co-regulate many target genes in fixed proportions, without fine-tuning of target promoters. In bacteria, we discovered that energetic stress similarly controls the alternative sigma factor σB through frequency-modulated pulses of activation, and determined how an underlying genetic circuit effectively implements a kind of "DC-to-AC" converter with just a few genes.

Most recently, we have focused on understanding how multiple regulators are coordinated in time to enable complex combinatorial regulation. For example, in yeast, inputs control gene expression by regulating the temporal overlap, or relative timing, of pulses of different transcription factors. Through these examples, and work from other labs, time-based regulation is emerging as a major regulatory mode that is likely to play important but largely unknown functions in cells. We are now excited by the challenge of understanding how multiple dynamic pathways interact with one another in time, and how these temporal interactions provide new functional capabilities for the cell.

Cell State Transition Dynamics
As they proliferate through multiple divisions, living cells undergo transitions between specific developmentally and functionally distinct states. Despite the centrality of these transitions for diverse biological functions, they have remained difficult to analyze in individual cells. We are currently developing new approaches to track these dynamic transitions at the level of individual cells and connect them to underlying genetic circuits, using embryonic stem cells (ESCs) as a model system.

Together, the approaches described above are helping to identify fundamental design principles that can help us understand natural genetic circuits and engineer synthetic ones.

This work is supported by the National Institutes of Health, the National Science Foundation, DARPA, the Gordon and Betty Moore Foundation, the Human Frontier Science Program, the Institute for Collaborative Biotechnology, and the Paul G. Allen Family Foundation.