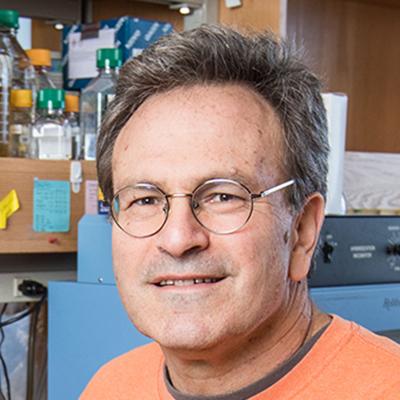 Dr. Waldor is Edward H. Kass Professor of Medicine at Harvard Medical School and a physician in the Division of Infectious Diseases at Brigham and Women's Hospital, Boston.

Matthew Waldor studies the evolution, cell biology, and pathogenicity of enteric bacteria that cause human disease.

We are exploring the cell biology and pathogenicity of enteric bacteria, including Vibrio cholerae, Vibrio parahaemolyticus, and Shiga toxin–producing Escherichia coli, which are important causes of diarrheal disease in many parts of the world. We have three major areas of ongoing investigation related to these human enteric pathogens:

Pathogen Physiology and Host Responses during Infection in Animal and Tissue Culture Models of Disease
We have developed infant rabbit–based models of the diarrheal diseases caused by V. cholerae (the agent of cholera), enterohemorrhagic E. coli (EHEC; e.g., E. coli O157) and other Shiga toxin–producing E. coli that cause the potentially fatal hemolytic uremic syndrome in addition to diarrhea, and V. parahaemolyticus, the most common bacterial cause of seafood-borne enteritis. The disease manifestations and histopathology in rabbits differ depending on the infecting pathogen, and each animal model closely mimics the corresponding human disease. We are using these models, coupled with emerging high-throughput technologies for studying transcriptomes, proteomes, and metabolomes, to explore the three pathogens' intraintestinal physiology and transmission. Our animal models are also facilitating evaluation of new therapeutics and vaccines for cholera and EHEC.

To enable comprehensive assessment of each pathogen's genetic requirements for growth in an animal host, we are using transposon insertion sequencing (TIS, aka TnSeq). This approach, which couples high-density transposon mutagenesis with high-throughput DNA sequencing, facilitates genome-wide analysis of the contributions of individual loci to growth and can be used under a broad range of conditions. Because stochastic experimental variation can confound analyses of TIS data sets, particularly in cases where host bottlenecks impose substantial restrictions on pathogen populations, we are developing computational approaches to compensate for such experimental noise. Our current analytical pipeline enhances the power of TIS to produce high-resolution, annotation-independent maps of fitness-linked loci across entire genomes.

To directly evaluate the activity of host and pathogen enzymes in the intestines of infected animals, we are using activity-based protein profiling (ABPP). This chemoproteomic technique relies on small-molecule probes that react with a particular enzyme class and allows selective detection, enrichment, and identification of active enzymes by mass spectrometry. ABPP can provide a more accurate assessment of enzymes that are active under conditions of interest than either transcriptomic or non-activity-based proteomic analyses. We have used this approach to identify a cascade of secreted V. cholerae proteases that are activated during infection, as well as host enzymes whose concentrations and activities are altered by V. cholerae proteases.

Both EHEC and V. parahaemolyticus rely on type III secretions systems to deliver protein "effectors" from the bacterial cytoplasm to the host cell cytoplasm. In our animal models, we have demonstrated that these secretion systems are essential for virulence for both pathogens. We have defined new V. parahaemolyticus effectors that are critical for virulence, but the host targets and pathways that are interrupted by these and other effectors remain to be defined. We are taking advantage of high-throughput approaches, such as CRISPR/cas technology, to elucidate how EHEC and V. parahaemolyticus effectors modulate host functions such as innate immunity and maintenance of the epithelial brush border.

Pathogen Localization and Population Dynamics during Infection
Most analyses of pathogen populations have relied on enumeration of pathogen numbers (via plating for colony-forming units) in homogenates of host tissues. Although informative, this approach does not permit fine-grained mapping of pathogens within infected tissues. We are using confocal microscopy and intravital two-photon microscopy to monitor the localization of fluorescently tagged pathogens during infection. These visual approaches can enable better understanding of host niches that are available for colonization, as well as structures that may serve as barriers to colonization. 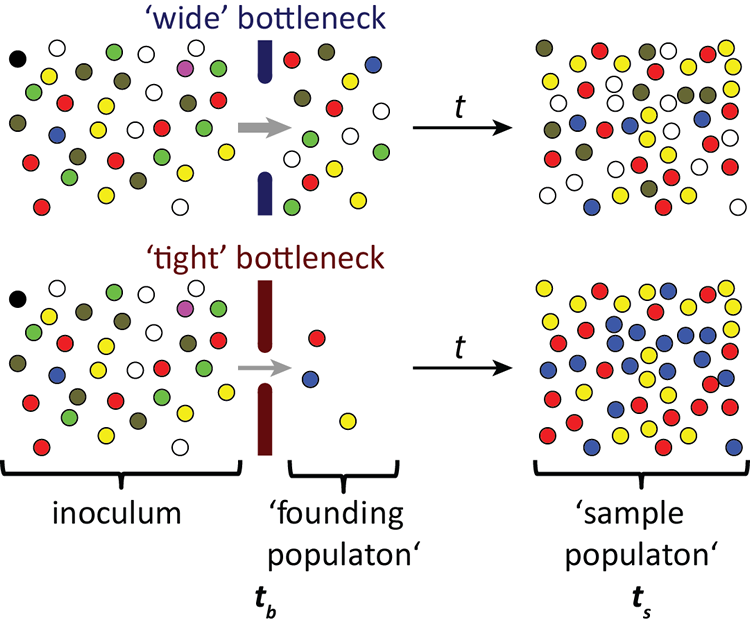 Enumeration of colony-forming units also provides limited insight into key infection parameters, such as the size of the founding population that establishes infection, the causes of population restrictions ("bottlenecks"), and pathogen migration patterns. To more accurately quantify pathogen population dynamics in vivo, we developed sequence tag–based analysis of microbial populations (STAMP). STAMP uses changes in the frequencies of genetically bar-coded organisms within a population to infer founding population sizes and pathogen migration patterns in infected hosts. We are using STAMP to decipher the nature and sites of action of host bottlenecks, as well as pathogens' strategies for circumventing them.

Role of D-Amino Acids in Bacterial Cell wall Remodeling and in Shaping the Composition of the Microbiota and Host Processes
Bacteria are surrounded by a mesh-like peptidoglycan (PG) polymer – i.e., the cell wall – which is essential for maintenance of cell shape and survival. Our understanding of the factors that modulate the synthesis and breakdown of the cell wall is not well developed. We are using a variety of approaches to decipher the mechanisms that control cell wall homeostasis. We discovered that bacteria modulate the amount and structure of their cell walls by releasing D-amino acids as cells enter stationary phase. The released D-amino acids can be incorporated into the cell wall by several different mechanisms and thereby modulate PG amount and strength. Even bacteria that do not release free D-amino acids can incorporate them into their cell walls, suggesting that these amino acids can function as both autocrine- and paracrine-like regulators of the cell wall properties in microbial communities. Ongoing work suggests that release of D-amino acids also influences the composition of the gut microbiota and host processes, including immune homeostasis.