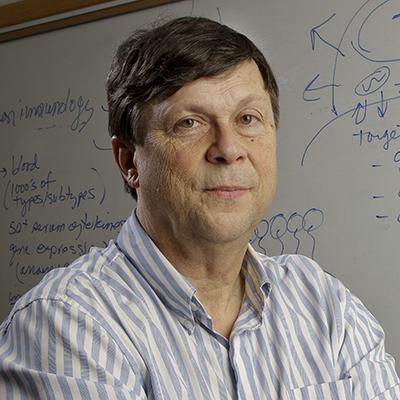 Dr. Davis is a professor and chair of the Department of Microbiology and Immunology at the Stanford University School of Medicine, where he is also director of the Stanford Institute for Immunity, Transplantation, and Infection.

Mark Davis is interested in how the immune system functions both normally and under the stress of a specific disease, whether from an external source as in the case of infectious diseases or from internal threats such as autoimmunity or cancer.

The immune system is a complex constellation of cells and molecules that is principally responsible for preventing us from certain death from a myriad of pathogenic microorganisms. It performs this enormous task by creating layers of defensive mechanisms whose functions are to identify, isolate, and kill invading organisms. It also has the capacity to neutralize and/or eliminate cancerous cells. We study the immune system of mice and human beings in two distinct ways. First, we try to understand in molecular detail how T lymphocytes, one of the key cell types in the immune system, distinguish foreign entities from self and mount a response. This is a critical event in the immune system and also arguably the best understood model for cell-cell recognition. Second, we are investigating ways to understand the human immune system, both for what it can tell us about immunology in general and because inbred mice have not, in most cases, been a reliable guide for developing treatments for diseases. Given the diverse mechanisms of immunity in humans, we also believe that this is an ideal testing ground for understanding how immune functions work as a system.

Integrating Molecular and Cellular Aspects of T Cell Recognition
To pursue our first goal, we have focused on developing advanced imaging techniques to understand the molecular interactions that underlie the process by which a particular T cell recognizes fragments of an antigen (peptide) that are bound to molecules of the major histocompatibility complex (MHC) and displayed on the surfaces of cells. These peptide-MHC complexes are then recognized by the T cell antigen receptor (TCR), an antibody-like molecule present on most T cells. The TCR is closely associated with the CD3 polypeptides, which mediate intracellular signaling through a kinase cascade. Our previous work and that of others characterized the biochemistry and genetics of TCRs, but in recent years we have focused on how these molecules operate in the larger context of T cell recognition, a context that includes other molecules on the T cell surface that work with the TCR, and on how ligand binding triggers T cell  activation. Video microscopy and other advanced imaging techniques, such as super-resolution fluorescence microscopy and three-dimensional electron microscope tomography, have helped us determine many of the key events of this process. In the first few minutes after a T cell recognizes another cell, a dramatic rearrangement of surface molecules and cytoarchitecture takes place to form what is called an immunological synapse. We have helped define the molecular structure and kinetics of synapse formation. Much of the rearrangement is cytoskeletal and depends on engagement of costimulatory receptors such as CD28 and LFA-1, in addition to the TCR. We also showed that synapses may last for many hours but require continuous TCR engagement.

We also developed single peptide-MHC labeling methods that allow us to determine exactly how many ligands are present in an initial T cell synapse and what the subsequent response is. This enables us to correlate ligand number with the consequences for individual cells. We used this method to show that all T cells surveyed thus far can detect a single molecule of peptide-MHC on the surface of another cell and that even this minimal ligand number is sufficient to trigger cytokine secretion in both naïve and memory CD4+ T cells. This shows that T cells can be as sensitive to foreign antigens as any sensory cells in the nervous system. In this and probably other respects, the immune system could be considered a sensory system for foreign entities, chiefly microbes.

Human Immunology
While we have learned a great deal about basic immunology from the laboratory mouse model, it has significant limitations in terms of genetics, environmental exposure, and evolutionary distance from human beings. Thus we have used both peptide-MHC tetramers and systems biology approaches to study the human immune system. With respect to the most T cells, we find that healthy adults have an abundance of self-specific T cells that are capable of being activated and that the effect of negative selection results in, at most, a reduction in the number of these cells, not their elimination. We suggest that the reason so many self-specific T cells are not eliminated is that the main objective of the T cell repertoire is to counter pathogens and any of their variants, and that mechanisms to enforce self-tolerance are generally quite effective. Indeed, we find that self-specific T cells are more difficult to activate compared with foreign antigen specific cells. We also find that in adults, but not newborns, many memory-phenotype T cells are directed against pathogen epitopes to which the individual has not been exposed. We showed that at least some this effect is likely a result of cross-reactivity of TCRs to other microbes. This may explain why infants and young children are so susceptible to infectious diseases and why a number of vaccines have been shown to decrease significantly mortality from diseases other than the one targeted by the vaccine. In another study, we analyzed over two hundred variables in the immune systems of twins, and found that most variation, including the flu vaccine response was driven by non-heritable influences, most likely environmental. This was also seen in the fact that cytomegalovirus infection, a life-long chronic herpes virus infection, changed almost 60% of the variables in monozygotic twins discordant for this condition. This indicates that the immune system is highly adaptive, shaped largely by the microbes an individual encounters over a lifetime. Ongoing collaborative work involves comparing the immune systems of children in Palo Alto with their counterparts in Bangladesh. We have also found that cytomegalovirus infection measurably boosts the response of young adults to a flu vaccination, indicating that while this virus is clearly pathogenic in subjects with an impaired immune system, it may actually be beneficial to healthy carriers.

In general, we are finding that studying the human immune system directly in people is highly complementary to mouse studies and, in some cases, provides a much broader view. It also brings us closer to realizing the vast potential of immunology to improve human health.

Grants from the National Institutes of Health, the Bill and Melinda Gates Foundation, and Parker Institute for Cancer Immunotherapy provided partial support for these projects.