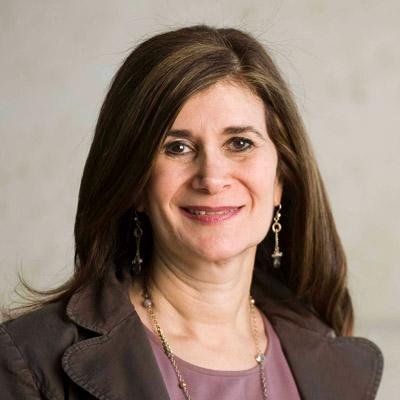 Dr. Joshua-Tor is a professor at Cold Spring Harbor Laboratory.

Leemor Joshua-Tor studies the protein components of the RNAi machinery in cells, which can selectively silence genes, as well as complexes involved in DNA replication.

My research program reflects my long-standing interest in nucleic acid regulatory processes. Trained as a chemist, I was initially drawn to nucleic acid chemistry and structure. Soon my focus broadened to the regulation of nucleic acid function and, in particular, the protein–nucleic acid complexes at the center of many basic life processes, such as replication and gene expression. I have been especially attracted to areas that present unique mechanistic challenges, though often of clinical relevance. Deciphering the mechanisms that underlie double-stranded RNA gene silencing is a major effort in my laboratory. Another is to obtain a molecular view of the initiation of DNA replication and how the proteins involved manipulate DNA.

The emergence of a new pathway for gene regulation, namely RNA interference (RNAi), sparked my interest. I was struck by how genetics, biochemistry, molecular biology, and bioinformatics were being used to understand this new paradigm in gene regulation. I wanted to add structural biology to the mix, moving the mechanistic descriptions beyond the "blobology" that depicted the various factors involved as blobs devoid of the molecular, chemical, and mechanistic features that might explain how they work in the various RNAi-related pathways.

We targeted Argonaute, the signature component of RISC, because it is involved in all RNAi-related processes. It was also the most mysterious component; nothing was known, except that it contained two conserved but uncharacterized domains: PAZ and PIWI. We initially solved the structure of the PAZ domain. Considering this along with results of biochemical studies, we proposed that the PAZ domain has a role in siRNA 3'-end recognition, which was subsequently confirmed by others in the field.

But it was our structure of a full-length Argonaute protein from an archaebacterium that instantly solved a long-standing puzzle in the RNAi field. We saw at once that Argonaute was the long-sought Slicer, which performs the critical slicing event—cleavage of the mRNA. This revelation arose from the fact that the PIWI domain looks very much like an RNase H enzyme, consistent with the biochemistry of the slicing reaction. We demonstrated that a large, positively charged groove along the protein could accommodate siRNA and substrate (mRNA), with the scissile phosphate at the active site. We then turned to Gregory Hannon (HHMI, Cold Spring Harbor Laboratory), who had just shown that only immunoprecipitations of human Argonaute-2 (hAgo2), but not the other human Argonautes, contain slicer activity. Together we mutated the key aspartates identified at the active site to alanine; this abolished slicing, showing hAgo2 to be the catalytic engine of RNAi. This is a clear case of structural biology identifying the critical role of a key protein in an important biological pathway.

Understanding how Argonaute-family proteins function in RNAi processes transcends the basic biochemistry at the active site of the enzyme. While some Argonautes that have an intact set of active-site residues are fully active Slicers, some are not. For example, hAgo2 uses its slicing activity for its function through siRNAs, but when mediating miRNA silencing it does not. What makes an Argonaute protein function as Slicer? How is this activity regulated? How do proteins that appear to be so similar in their basic structure work in diverse aspects of gene silencing? We are addressing these questions with a close look at the various functional Argonaute proteins, including the Piwi subfamily, along with studies on the biogenesis of some small RNAs. An unexpected challenge in the field was to obtain RNA-free enzyme. Having done that, we are able to probe into the activities of Argonaute proteins and examine their structures with almost any loaded RNA of our choice (Figure 1).

While many studies focus on the identification of microRNA (miRNA) targets and the various downstream mechanisms of gene silencing, we are interested in the regulation of a particular miRNA, let-7. The pluripotency factor Lin28 inhibits the biogenesis of the let-7 family of mammalian microRNAs. Lin28 is highly expressed in embryonic stem cells and has a fundamental role in regulation of development, glucose metabolism and tissue regeneration. Alternatively, Lin28 overexpression is correlated with the onset of numerous cancers, while let-7, a tumor suppressor, silences several human oncogenes. Lin28 binds to precursor let-7 (pre-let-7) hairpins, triggering the 3’ oligouridylation activity of TUT4/7. The oligoU tail added to pre-let-7 serves as a decay signal, as it is rapidly degraded by the exonuclease Dis3L2. Genetic disruption of DIS3L2 is the primary cause of Perlman syndrome, a congenital disorder leading to fetal overgrowth and an increased susceptibility to Wilms’ tumor development. Subsequent studies have shown that Wilms’ tumors, a common pediatric kidney cancer; overexpress Lin28, underscoring the role of miRNA regulation in kidney tumorigenesis. In somatic cells, in the absence of Lin28, TUT4/7 promotes let-7 biogenesis by catalyzing single uridine addition to a subset of pre-let-7 miRNAs. We are studying the molecular basis and mechanism of Lin28 mediated recruitment of TUT4/7 to pre-let-7, and its effect on the uridylation activity of TUT4/7, switching it from a monouridylation activity to an oligouridylase, and the subsequent degradation of pre-let-7 by Dis3L2.

RNAi-mediated transcriptional gene silencing (TGS) directed toward heterochromatin establishment and maintenance is another area of intense effort in my lab. We set out to understand the function of complexes involved in TGS, the role of their components, and the mechanism underlying heterochromatization. The fission yeast Schizosaccharomyces pombe is the best-characterized system to study TGS because the protein complexes involved are well defined and is essential for kinetochore assembly required for proper segregation of chromosomes during cell division. It is also easy to translate structural, biochemical, and biophysical findings to in vivo studies. Assembly of centromeric heterochromatin is dependent on several multiprotein complexes. RITS (RNA-induced transcriptional silencing complex), a specialized RISC complex, which physically anchors small RNAs to chromatin. It consists of the Argonaute protein, Ago1; the chromodomain-containing protein Chp1; a GW-like protein Tas3; and siRNA derived from centromeric repeats. We asked whether slicing activity is important for TGS, given that Ago1 is the sole Argonaute protein in S. pombe. Together with my colleague Robert Martienssen (HHMI, Cold Spring Harbor Laboratory), we showed that Ago1 is an active Slicer in vitro and that slicing is required for TGS. With Janet Partridge of St. Jude Children's Research Hospital we showed that Chp1 has an unusually high affinity for a particularly important heterochromatin mark and that Chp1's tight embrace of Tas3 forms a bridge between the RNAi machinery and the recognition and placement of heterochromatin marks that bring about silencing. The structure of the Chp1-Tas3 complex also revealed the presence of a PIN domain at the C terminus of Chp1, which contributes to post-transcriptional gene silencing of subtelomeric transcripts independently of RNAi. We suggested that Chp1-Tas3 provides a solid and versatile platform to recruit both RNAi-dependent and RNAi-independent gene-silencing pathways for locus-specific regulation of heterochromatin, and that the reach of long and flexible regions in these two proteins might be important for contacting other nucleosomes at these loci. The RITS complex recruits the H3K9 methylase, Clr4, which is part of a large complex called CLRC. We are elucidating the functions of components of this complex.

Recently, intriguing mechanistic parallels between TGS processes in S. pombe and silencing of transposable elements in the germline through the piRNA pathway have been emerging. This aspect of silencing through the Piwi clade of the Argonautes is one of the reasons we have been fascinated by the molecular mechanisms underlying this pathway.

The Argonautes, named for the squid-like appearance of the Arabidopsis Ago1 mutant, are central to all RNAi pathways and are stretching their tentacles into diverse forms of gene silencing. Our Ago-centric approach is enabling us to reveal some of the biochemical mechanisms underlying these pathways. Since we are addressing these mechanisms across broad biological systems, we have the opportunity to understand the evolution of this mechanism, particularly the intrinsic catalytic activity and its involvement in diverse silencing pathways.

Our aim in these studies is to dissect, decipher, and study the evolution of the intricate mechanisms underlying these fundamental biological processes.