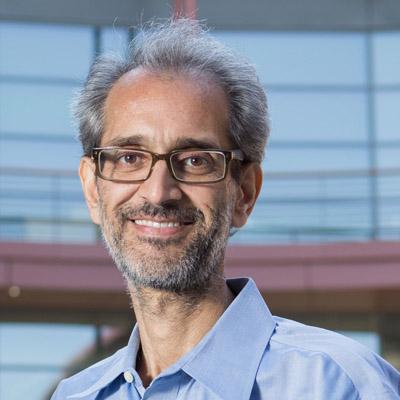 Dr. Shenoy is a professor of electrical engineering, neurobiology, and bioengineering at Stanford University.

Krishna Shenoy brings an engineer's perspective to his research on how the brain guides body movements. That perspective has led him to unique insights into the dynamic neural circuits that control motor activity. It also keeps his research team focused on gaining knowledge and developing technologies aimed at restoring movement for people with paralysis.

By studying the brains of primates as they execute specific tasks, Shenoy and his colleagues have probed how groups of neurons coordinate and cooperate with one another to generate arm movements. Their computational analyses of large-scale neural data show how populations of neurons involved in motor activity evolve dynamically, prompting neuroscientists to reconsider how neural circuits function. As Shenoy and his group investigate the basic principles the brain uses to control movement, they are applying what they learn to the development of medical technologies.

Shenoy is also considered a leader in the emerging field of brain-machine interfaces to control the movement of computer cursors and prosthetic limbs. He has developed computational methods to dramatically speed up computers' ability to decode messages from a person's brain. These algorithms have been incorporated into a system designed to allow people with paralysis to control a computer cursor with their thoughts; this system is being evaluated in a clinical trial.