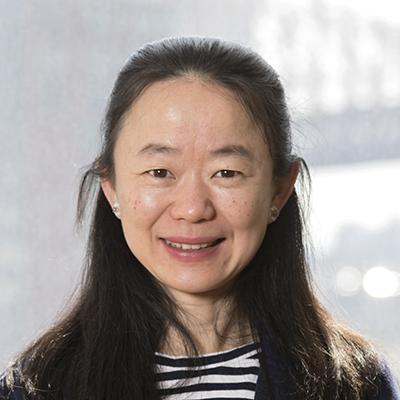 Dr. Chen is a professor and head of the Laboratory of Membrane Biology and Biophysics at the Rockefeller University.

Jue Chen studies the structure of proteins that use energy to transport solutes—necessary nutrients as well as unwanted toxins—across cell membranes. Determining how such transporters work will aid in understanding the basic mechanisms of active transport.

Research in my laboratory centers on structural and mechanistic studies of ATP-binding cassette (ABC) transporters. ABC transporters are ubiquitous membrane proteins that import or export molecules across the cellular membrane. In prokaryotes, these proteins are critical survival factors that function in the uptake of nutrients and in the secretion of toxins and antimicrobial agents. Humans have 48 different ABC transporters, and more than a dozen genetic diseases have been traced to ABC transporter defects. ABC transporters are also central to multidrug resistance in many pathogenic bacteria and tumor cells. Thus ABC transporters are a compelling class of proteins, both for their medical relevance and for basic membrane biology.

ABC Importers
We use the maltose transporter (MalFGK2) from Escherichia coli as a model system to understand ABC importers. To construct the transport cycle, we determined the crystal structures of the maltose transporter in three distinct functional states. We obtained the inward-facing conformation, also known as the resting state, in which the transporter has very low ATPase activity, in the absence of maltose and nucleotides. The outward-facing conformation, corresponding to a catalytic intermediate in which ATP is poised for hydrolysis, was stabilized by the periplasmic maltose-binding protein and ATP. Finally, we captured a pretranslocation complex, which shows how substrates initiate the transport cycle, in the presence of the maltose-binding protein but in the absence of ATP. Then, to characterize the chemistry of ATP hydrolysis at an atomic level, we also determined crystal structures of the maltose transporter stabilized by ADP in conjunction with the phosphate analogues BeF3-, VO43-, and AlF4-at a resolution 2.2–2.4 Å. These phosphate analog structures mimic conformational states along the trajectory of ATP hydrolysis and demonstrate that ABC transporters catalyze ATP hydrolysis via a general base mechanism.

ABC Exporters
In contrast to the case with ABC importers, very little is known about the exporters. For example, we have no information regarding how substrates are recognized and how ATP hydrolysis drives substrate release. To address these questions, we are studying several prokaryotic and eukaryotic exporters. Most recently, we determined the crystal structure of a multidrug transporter P-glycoprotein (P-gp) from Caenorhabditis elegans. P-gp confers multidrug resistance in cancer cells. It also affects the absorption, distribution, and clearance of drugs unrelated to cancer and of xenobiotics. The structure of the C. elegans protein provides an accurate model with which to interpret decades of functional and biochemical data on P-gp. Our functional data complement the crystal structure to support a picture in which P-gp uses the energy from ATP hydrolysis to expel lipophilic molecules from the inner leaflet of the membrane. We will make a long-term commitment to detailed structure/function studies of this important protein. We hope that this research will advance our understanding of the fundamental mechanisms underlying multidrug resistance and ultimately lead to novel therapeutic reagents for cancer treatment.

Part of this work was also supported by a grant from the National Institutes of Health.