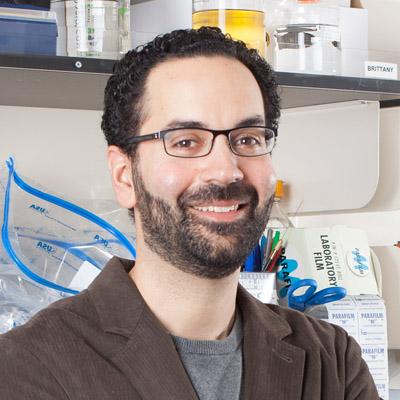 Dr. Mougous is an associate professor of microbiology and biochemistry at the University of Washington.

Joseph Mougous says it's a mistake to assume that bacteria operate as independent cells just because they are single-celled organisms. Bacteria intermingle in the environment, and Mougous has uncovered surprisingly sophisticated and diverse ways in which they interact when in close quarters.

As a postdoctoral researcher, he studied a secretion system present in hundreds of bacterial species. His own lab has gone on to discover that these microbes usually employ the system to deliver toxic proteins to other bacteria, rather than the predicted target, host cells. Many bacteria use the system against microbial species competing for the same resources. They even inject the toxic proteins into their own kin, but Mougous showed that each species produces immunity proteins that prevent self-harm. By studying these interactions cell by cell, his team has found that the weaponry has a downside: activating the system triggers competitors to respond by activating their own toxin-delivery systems.

Mougous's group recently discovered that, throughout evolution, many nonmicrobial species have co-opted genes that encode these bacteria-killing toxins. They found one such gene in deer ticks, and have shown that the encoded protein inhibits proliferation of the bacterium that causes Lyme disease.