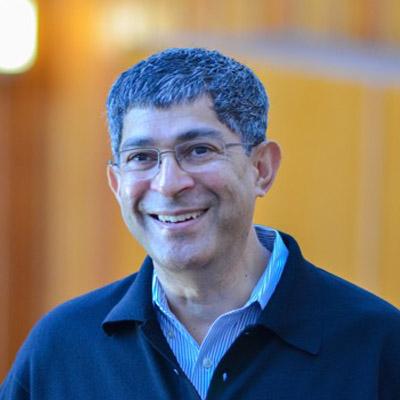 Dr. Kuriyan is a professor in the Department of Molecular and Cell Biology and Department of Chemistry at the University of California, Berkeley.

John Kuriyan is interested in the structure and mechanism of the enzymes and molecular switches that carry out cellular signal transduction and DNA replication. His laboratory uses x-ray crystallography to determine the three-dimensional structures of proteins involved in signaling and replication, as well as biochemical, biophysical, and computational analyses to elucidate mechanisms.

Structural Mechanisms in Cellular Signaling
Current research in my laboratory concerns the enzymes and molecular switches that carry out cellular signal transduction. We use biochemical, biophysical, and computational analyses to elucidate the  switching mechanisms of these signaling proteins. Breakthroughs from our lab have included figuring out the workings of proteins known as tyrosine kinases, which are switches that often go awry in cancer. We have made substantial contributions towards a fundamental understanding of the structures of these switches, leading to explanations for how the cancer drug Gleevec achieves specificity and how the catalytic activity of the epidermal growth factor receptor, which malfunctions in many cancers, is regulated. Although the lab now works exclusively on cell signaling, we also had an emphasis on DNA replication in the past. In particular, we had worked out, through structural analysis, how high speed DNA polymerases achieve very high processivity.

Targeted cancer therapy is now becoming a reality, with the growing ability to identify the molecular lesions that are at fault in a particular patient, and to intervene specifically to block the aberrant action of the faulty protein. We have been focused on understanding the molecular mechanisms that go wrong in signaling pathways controlled by the tyrosine kinases that relay information from the cell surface to the cellular machinery. This work began in the early 1990s, when we reported the first structure of an SH2 domain bound to a phosphorylated peptide segment, thus revealing the key recognition event that is the first step in the intracellular chain of events. We then worked out how two important classes of tyrosine kinases, exemplified by Abl and Src, are controlled by phosphorylation, by determining the three-dimensional structures of their autoinhibited states. A key breakthrough was the determination of the structure of the cancer drug Gleevec bound to the kinase domain of Abl, which revealed that the drug recognized an inactive conformation of the kinase rather than the active one. This discovery helped explain the pattern of resistance mutations that emerge in patients taking the drug, and provided the necessary background for the development of second-generation Abl inhibitors by others.

Current Research
Activation of the epidermal growth factor receptor. Receptor tyrosine kinases span the cell membrane and coordinate the first step in transmitting extracellular signals onward to cellular machinery. We study the epidermal growth factor receptor (EGFR, also known as ErbB1 or Her1) and its three close relatives: ErbB2/Her2 and ErbB4/Her4, which are kinase-active, and ErbB3/Her3, which is not. The structures of intact forms of these receptors have yet to be determined, but investigations of fragments of the receptor, by our lab and others, have provided a detailed view of its activation mechanism. Ligand binding converts the receptor to a dimeric form, in which contacts are restricted to the receptor itself, allowing heterodimerization of the four EGFR family members without direct ligand involvement. We discovered that activation of the receptor depends on the formation of an asymmetric dimer of kinase domains, in which one kinase domain allosterically activates the other. This explains how kinase-dead HER3 can activate other members of the family by heterodimerization, a fact that is important in certain cancers. In collaboration with David Wemmer (Berkeley) and D.E. Shaw Research (New York), we deduced that  coupling between the extracellular and intracellular domains may involve a switch between alternative crossings of the transmembrane helices, which form dimeric structures. Current work involves the study of how receptor activation generates specific output signals, and the role of the plasma membrane in controlling this process, in collaboration with Ehud Isacoff and Jay Groves (Berkeley).

Tyrosine kinases in T cell and B cell signaling. The receptors of T and B lymphocytes, the T cell receptor (TCR) and the B cell antigen receptor (BCR), differ in the extent to which they are under stringent control to protect against spurious activation. In collaboration with Art Weiss (UCSF), we are studying how the closely related but distinct sets of cytoplasmic tyrosine kinases that operate in these two kinds of lymphocytes differ in their regulatory properties. TCRs and BCRs are both coupled to invariant chains that contain common sequence motifs called immunoreceptor tyrosine-based activation motifs (ITAMs) that mediate antigen receptor signaling.  This signaling involves the serial activation of members of three families of kinases: the Src-family kinases, Syk/ZAP-70 and Tec-family kinases. We seek to understand the features of these distinct kinases that account for their differential usage in T versus B cells.

The tyrosines in the ITAMs are phosphorylated preferentially by Src-family kinases.  In B cells these kinases are Lyn, Blk and Fyn, whereas in T cells they are Lck and Fyn. The Syk kinase in B cells and the related ZAP-70 kinase contain tandem SH2 domains that permit both kinases to be recruited to doubly phosphorylated ITAMs with high affinity and specificity, where they are activated and phosphorylate downstream substrates.  However, Syk can phosphorylate ITAMs and downstream substrates, whereas ZAP-70 poorly phosphorylates ITAMs and is under tighter negative regulatory control. The Tec kinases, Itk in T cells and Btk (Bruton’s tyrosine kinase) in B cells, act further downstream, and are essential for switching on a calcium response after receptor activation. In collaboration with Stephen Harrison (Harvard), we recently worked out how Btk is autoinhibited, and discovered an unexpected role for inositol phosphates that does not appear to operate in Itk. It is striking that the sequences of the various T cell kinases can be distinguished from those of their B cell counterparts throughout vertebrate evolution, but the link between this specialization in sequence and the specialization in cellular function is not understood and is the principal focus of our investigations.

Activation of Ras by nucleotide exchange. Ras is a small membrane-bound guanine nucleotide-binding protein that transmits signals when bound to GTP. The activation of tyrosine kinase receptors results in the recruitment of the Ras-specific nucleotide exchange factor SOS to the membrane, where it encounters Ras and catalyzes the exchange of bound GDP for GTP. Our serendipitous discovery that Ras, which is the substrate of SOS, is itself required for SOS activity is helping us understand a complex mechanism that regulates the activation of Ras by SOS. We are studying how SOS is activated at the cell membrane by growth factor receptors, and how this mechanism differs from the activation of other Ras-specific nucleotide exchange factors that are not subjected to Ras-mediated feedback control, such as Ras-GRP1. This work is in collaboration with Jeroen Roose (UCSF) and Jay Groves (Berkeley).

Ca2+-calmodulin dependent protein kinase-II (CaMKII) CaMKII is a Ser/Thr kinase that is particularly important in neuronal signaling and cardiac function. CaMKII has a unique architecture, in which the catalytic domains are linked flexibly to a central hub. This organization, in which twelve or more kinase domains are maintained in close proximity, enables the highly cooperative activation of CaMKII by Ca2+/calmodulin (Ca2+/CaM) and the integration of calcium inputs, one topic of study in the lab. The manner in which CaMKII is regulated by phosphorylation differs from that of all other kinases. We have delineated the structural basis for the critical roles played by three phosphorylation sites in the enzyme. One of the sites, Thr 286, prevents rebinding of the autoinhibitory segment to the kinase domain upon phosphorylation. Phosphorylation of Thr 286 is the key step by which CaMKII gains calcium-independence (autonomy) after stimulation by Ca2+/CaM. The other two sites, Thr 305 and Thr 306, are located within a CaM-binding element that is part of the autoinhibitory segment. Phosphorylation of these two sites prevents the rebinding of Ca2+/CaM to CaMKII. The importance of phosphorylation at these three sites is underscored by the fact that mice in which these sites are mutated exhibit distinct defects in learning and memory.

We discovered recently that the activation of CaMKII-α by Ca2+/CaM triggers the exchange of activated subunits between different holoenzyme assemblies. Subunit exchange might provide a mechanism for the maintenance of some level of activated CaMKII long after withdrawal of the activating stimulus. It might also provide a mechanism to potentiate the effects of calcium stimuli under conditions where Ca2+/CaM is limiting with respect to CaMKII, as in the dendritic spine. Current work on CaMKII is focused on understanding the structural basis for activation-triggered subunit exchange and on establishing its potential role in signal transduction by the enzyme. Recent experiments suggest that the phosphorylation of Thr 305 and Thr 306 releases the CaM-binding element from interaction with either the kinase domain or Ca2+/CaM, allowing it to engage the hub of CaMKII and to destabilize the assembly.