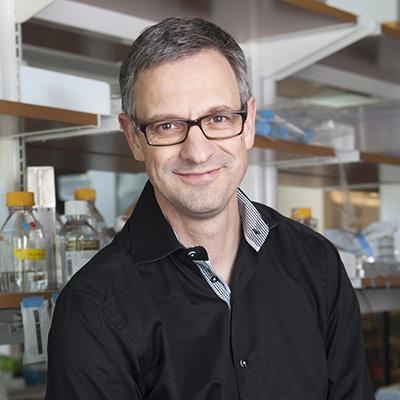 Dr. Dekker is a professor of biochemistry and molecular pharmacology and codirector of the Program in Systems Biology at the University of Massachusetts Medical School.

Job Dekker has added new dimension to how scientists think about genomes.

As a postdoctoral researcher, he developed a method to determine the folded shape of a chromosome with unprecedented resolution. He later extended the technology, which he calls chromosome conformation capture (3C), to enable genome-wide analysis, and to construct the first three-dimensional map of the human genome.

That map made clear that human chromosomes fold into a series of chromatin domains that play roles in regulating gene expression. It also revealed genome neighborhoods that compartmentalize the active regions of chromosomes, away from inactive domains.

Dekker and scientists around the world have used 3C to find physical connections between regions of the genome that, when viewed as a linear DNA sequence, appear distant from one another, thus explaining how genes can be influenced by seemingly faraway regulatory elements.

He has also used his methods to show how the genome's three-dimensional organization differs when cells are preparing to divide compared to the period between cell divisions. In that state the chromosomes fold as arrays of chromatin loops. Since chromosomes must transition between these two fundamental states, Dekker is now investigating how cells fold, unfold, and refold their genomes under different circumstances.