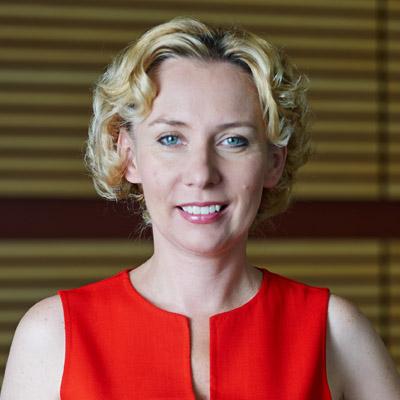 Dr. Wysocka is an associate professor of chemical and systems biology and of developmental biology at Stanford University School of Medicine.

Imagine an orchestra, in which musical instruments of diverse timbres and tones harmonize under the guidance of a conductor. Every instrument must produce the proper notes at precisely the right times to generate a melodious result. This, in principle, is how an embryo develops. But instead of one conductor, there are many, and Joanna Wysocka is trying to decipher how these molecular maestros orchestrate the process of embryonic development by turning genes on and off at the appropriate times.

Wysocka and her lab team study cis-regulatory elements – bits of noncoding DNA that control the transcription of nearby genes. Central to this transcriptional regulation are segments of DNA, called enhancers, that help dictate where and when certain genes become active. Wysocka and her group are particularly interested in how enhancers regulate gene activity and, in turn, establish physical differences in humans.

To better understand how genetic variation manifests physically, Wysocka’s team also looks at gene regulation in cranial neural crest cells (CNCCs). These cells establish a central plan for facial morphology in developing vertebrates and account for the diversity of facial features among species. The remarkable variation that exists in craniofacial structures depends on which genes are active in the CNCCs. While differences in CNCC gene regulation are natural and necessary, genetic discrepancies due to mutations or errors in transcription can lead to facial abnormalities or birth defects, such as cleft palate. By integrating their studies of in vitro models of human CNCC formation with their in vivo work in model organisms such as mice and Xenopus frogs, Wysocka’s lab aims to decipher the genetic mechanisms that mediate facial development and evaluate their impact on healthy and diseased morphology.