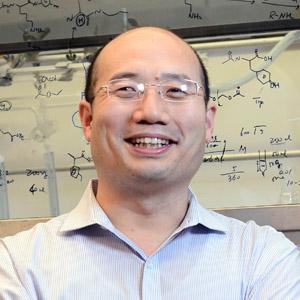 Dr. Lin is a professor in the Department of Chemistry and Chemical Biology at Cornell University.

Genome sequencing has provided scientists with a wealth of information. But to really understand the biology, Hening Lin believes the next two important challenges are to discover the biochemical function of all proteins and to understand the regulatory roles of protein modifications.

He aims to address these challenges by studying enzymes that regulate protein modifications and have unknown biochemical functions. One class of such enzymes, the sirtuins, is supposed to catalyze the removal of acetyl groups from proteins. One problem that caught Lin's attention was that only three of the seven known human sirtuins actually remove acetyl groups efficiently. By studying one of the "weaker sirtuins," Sirt5, Lin discovered that the enzyme is better suited to work with malonyl and succinyl groups that are bulkier than acetyl groups.

He further demonstrated that this is a natural function of the enzyme inside cells. His work suggests that the addition and removal of malonyl and succinyl groups – previously unrecognized forms of protein modification – are likely to be important in regulating protein function. Lin later discovered that another family member, Sirt6, removes a different chemical tag from proteins and showed that this activity promotes cells' secretion of tumor necrosis factor, a signaling molecule involved in inflammation.

Lin is still learning about sirtuins, but he's also investigating other enzymes of unknown function. Each one, he says, is an opportunity to understand more about physiology and disease.