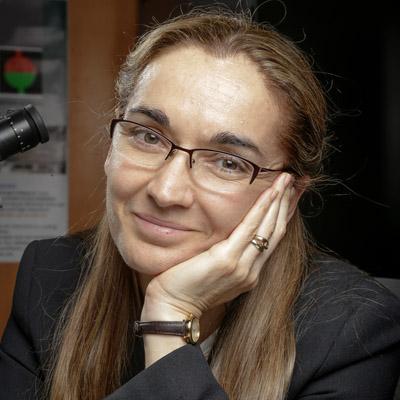 Dr. Nogales is a professor of biochemistry, biophysics and structural biology at the University of California, Berkeley and a senior faculty scientist at Lawrence Berkeley National Laboratory.

Eva Nogales's lab is dedicated to gaining mechanistic insight into two important areas of eukaryotic biology: central dogma machinery in the control of gene expression, and cytoskeleton interactions and dynamics in cell division. The unifying principle in her work is the study of macromolecular assemblies as whole units of molecular function by direct visualization of their architecture, functional states, and regulatory interactions. To gain a molecular understanding of their systems of interest, her lab uses state-of-the-art cryo-electron microscopy (cryo-EM) and image analysis, as well as biochemical and biophysical assays.

Cytoskeleton and Cell Division
Microtubule structure, dynamics, and interactions. A long-standing interest of my lab is the mechanistic understanding of the process of microtubule dynamic instability by which microtubules switch between growth and shrinking phases powered by GTP hydrolysis in tubulin. We have characterized tubulin polymers proposed to mimic the structural intermediates in the processes of microtubule assembly and disassembly, and we are particularly interested in the role of the nucleotide state in microtubule structure and stability. Recently we developed an image-processing scheme that takes advantage of the pseudohelical symmetry of the microtubule to produce record resolution structures (better than 5 Å) for microtubules in different nucleotide states or bound to Taxol. This work has been a long-term goal of the cytoskeleton field and represents a quantum leap in our understanding of what makes microtubules so special.

Figure 1: Overall architecture of the Ndc80 kinetochore complex (left). Cryo-EM structure of the microtubule-binding head of the Ndc80 complex bound to a microtubule with a tubulin monomer repeat (right). Adapted from Alushin, G. et al. 2010. Nature 467:805–810.
Figure 2: 3D model of the budding yeast kinetochore bound to a depolymerizing microtubule. The cryo-EM structure of the Dam1 complex is shown in blue, the microtubule is green, the nucleosome is dark purple, inner kinetochore complexes are shown in light purple, the Mtw1 complex is pink, the C-terminus of Spc105 is orange, Ndc80p is light blue, Nuf2p is gold, Spc24 is green, Spc25 is red, Ndc80p’s unstructured N-terminus is magenta and Ndc80’s coiled-coil is grey. Adapted from Alushin, G. and Nogales, E. 2011. Current Opininon in Structural Biology 21:661-669.
Figure 3: EM images and schematic diagrams of the yeast septin rod, and paired filament assemblies. The yeast hetero-octameric septin complex is a linear rod with the subunits arrayed in the order and with the interfaces indicated. The rod is nonpolar because it has a two-fold axis of rotational symmetry running left to right between and orthogonal to the central pair of Cdc10 septins. The C-terminal extensions of the two Cdc3 and Cdc12 pairs project from the same face of the rod and presumably associate to form parallel coiled coils that are essential for rod stability. Filaments form via end-on-end assembly of the rods mediated by Cdc11-Cdc11 interaction through an N-C interface. Adapted from Bertin, A. et al. 2008. Proceedings of the National Academy of Sciences USA 105:8274–8279.
Figure 4: Projection image of a section of the Saccharomyces cerevisiae bud neck, showing septin filaments abut the cell membrane (left). Segmented tomogram showing septin filaments running both parallel and perpendicular to the mother-bud axis (right). Adapted from Bertin, A. et al. 2012. Molecular Biology of the Cell 23:423–432.
Figure 5: Human TFIID structure: alternative conformations and binding of DNA. Adapted from Cianfrocco, M.A. et al. 2013. Cell 152:120–131.
Figure 6: Human transcription preinitiation complex (PIC): organization of the human transcription PIC based on single-particle cryo-EM analysis. Adapted from He, Y. et al. 2013. Nature 495:481–486.
Figure 7: Activation of Cas9: schematic of the lobe rearrangement triggered by guide RNA binding to Cas9 and by target DNA binding. Adapted from Jinek, M. et al. 2014. Science 343.
Figure 8: Subnanometer cryo-EM structure of Cascade, showing six CasC subunits in alternating gray and blue, two CasB subunits in yellow, CasA in purple, CascD in orange, CasE in magenta, and crRNA in green. Adapted from Wiedenheft, B. et al. 2011. Nature 477:486-489.
Figure 9: Cryo-EM structure of the yeast proteasome. The different subunits in the 19S regulatory particle are color-coded. Adapted from Lander, G.C. et al. 2012. Nature 482:186–191.
Figure 10: 3.5 Å Microtubule Structure - lateral contacts between protofilaments. Details on the lateral contacts between alpha-tubulin subunits in the MT. Credit: Rui Zhang and Eva Nogales

Microtubule dynamic instability is essential during mitosis, and a number of cellular factors, including structural kinetochore components, interact with the dynamic ends of microtubules and are able to modify the behavior of these polymers. Most importantly, outer kinetochore complexes use unique structures at microtubule ends to harvest the energy of the nucleotide-coupled assembly and disassembly processes to carry out cellular work. In collaboration with David Drubin and Georjana Barnes (University of California, Berkeley), we showed that the 10-subunit Dam1 yeast kinetochore complex assembles around microtubules into rings that move processively with microtubule ends, thus coupling microtubule depolymerization to directional movement. Cryo-EM studies of Dam1 rings around microtubules have allowed us to describe the structure and organization of the Dam1 ring and have shed light on the nature of Dam1 oligomerization and on the interaction of the Dam1 complex with the microtubule surface.

Movie:Computer animation of the disassembly and reassembly of tubulin into microtubules, illustrating the existence of structural intermediates and their relationship to the nucleotide state. Produced for HHMI by Stylus Visuals, Kensington, California.

The Ndc80 complex is the microtubule-interacting component of the highly conserved KMN kinetochore network. Our lab has produced the subnanometer structure of Ndc80 bound to the microtubule, showing how the complex binds with a monomeric tubulin repeat at the intra- and interdimer interfaces. This binding is sensitive to tubulin conformation, has a stabilizing effect on microtubules, and is coupled to a self-interaction of the Ndc80 complexes along protofilaments that readily explains the cooperativity of the process. More recently we have dissected the roles of the essential Ndc80 protein tail in microtubule binding and self-association and how such roles are regulated by the checkpoint kinase Aurora B. We have visualized, for the first time, the C-terminal tail of tubulin as it interacts with the Ndc80 complex in an adjacent protofilament, a novel mechanism of microtubule stabilization. In collaborations with Stefan Westermann (Research Institute of Molecular Pathology, Vienna, Austria) and Andrea Musacchio (Max Planck Institute of Molecular Physiology, Dortmund, Germany) we have also characterized the organization of the whole KMN kinetochore complex. Our goal is to gather enough information on these systems to generate a comprehensive model of the robust and regulated interaction of chromosomes and spindle microtubules during mitosis.

Septin assembly and membrane interactions. Septins are highly conserved GTPases that form filaments in vivo and in vitro and are essential in a variety of membrane-remodeling processes, most notably cytokinesis. We are particularly interested in the combinatorial character of septin-septin interactions and the interplay between membrane interaction and septin self-assembly. In collaboration with Jeremy Thorner (UC Berkeley), we have shown how the four essential mitotic yeast septins (Cdc3, Cdc10, Cdc11, and Cdc12) and the nonessential Shs1 come together in functional complexes and how they interact within filaments. We have described a marked enhancement in assembly that is totally dependent on and specific to PIP2 (phosphatidylinositol-4,5-bisphosphate), a signaling lipid known to be localized at the bud neck and to be essential to the cytokinetic process. Our characterization of the bud neck ultrastructure has shown the presence of coexisting septin filaments running both parallel and perpendicular to the bud axis. The relationship between in vivo phenotypes and septin assembly, organization, and interaction with different proteins is a major interest of our lab.

Gene Regulation
Transcription regulation. The accurate initiation of transcription requires the assembly of a preinitiation complex (PIC) that includes the transcription factors TFIID, TFIIA, TFIIB, TFIIE, TFIIF, TFIIH, and RNA polymerase II (RNAPII). Regulation is achieved by gene-specific activators and repressors, cofactor complexes that mediate the interaction of the general machinery with sequence-specific activators, and protein complexes involved in the modification or remodeling of chromatin. Our lab is interested in characterizing the structure of these different components and how they interact to regulate transcription. A main effort has been to define the structure of the human TFIID. Binding of this general factor to the core promoter is the first step in the assembly of the whole transcriptional machinery.

In collaboration with Robert Tjian (HHMI, UC Berkeley), we obtained the first three-dimensional model of TFIID and showed the existence of significant flexibility within the complex, which we proposed could play a distinct role in directing the formation of an active PIC. We have also characterized a cell-type-specific TFIID complex containing TAF4b and studied the interaction of TFIID with differential activators. In a recent collaboration with James Kadonaga (UC San Diego), we have shown that TFIID coexists in two predominant states, differing dramatically in the location of lobe A (which contains both TBP and TFIIA) with respect to a more stable BC core. A novel conformation of TFIID, the rearranged state, interacts with promoter DNA in a TFIIA-dependent manner. Downstream promoter regions are bound by lobe C, while the upstream DNA sequence is bound within lobe A. We propose that the dynamic conformational landscape of TFIID may have regulatory consequences by providing specific structural targets that can be recognized by transcriptional activators and repressors, and we are continuing to test this idea.

Recently, we have developed an in vitro reconstitution system to describe the stepwise assembly of the human PIC. This study allowed us to describe how TFIIF stabilizes the core promoter DNA along the surface of RNAPII, and how the addition of TFIIE results in the topological trapping of the DNA on the RNAPII cleft. TFIIE positions TFIIH so that the active ATPase in transcription initiation, XPB, is downstream of the transcription start site. We used an artificial DNA template that served as a mimic of that generated naturally by the helicase action of TFIIH. The apparent movement of downstream DNA in this structure, together with the positioning of XPB, suggests how XPB would act as a DNA translocase whose activity would push against the stably bound upstream DNA at the TATA box to induce negative supercoiling at the transcription start site. Our lab has also provided the first description of the repressive interaction of human RNAPII with noncoding RNAs (ncRNAs) (in collaboration with James Goodridge, UC Boulder), and by the RecQL5 helicase, which defines a new paradigm in eukaryotic transcriptional regulation.

Gene silencing. Polycomb repressive complex 2 (PRC2) is essential for gene silencing, establishing transcriptional repression of specific genes by trimethylating lysine 27 of histone H3. Despite its biological importance, little was known about PRC2 architecture and subunit organization. Our lab reconstituted a tetrameric human PRC2 complex (Ezh2/EED/Suz12/RbAp48) with its cofactor AEBP2 and obtained the only available structural description of the complex (20-Å resolution). We used a tagging strategy to position all functional domains within the complex that showed that the Ezh2's SET domain forms a core with the two activity-controlling elements, the WD40 domain of EED and the VEFS domain of Suz12. Our next goals include determining how PRC2 interacts with nucleosomes or with ncRNAs.

Portions of this work are also funded by the National Institute of General Medical Sciences.