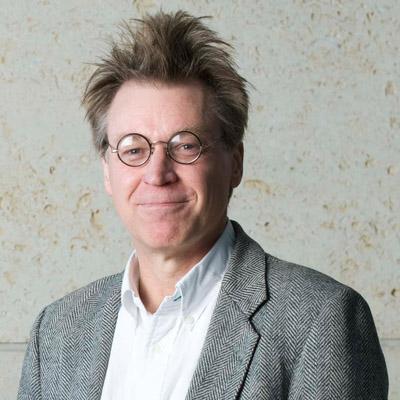 Dr. Jorgensen is a Distinguished Professor in the Department of Biology at the University of Utah.

Erik Jorgensen studies the molecular mechanisms of synaptic function. Genetic screens and characterization are performed in the nematode C. elegans and then validated in rodents. In addition, his laboratory is developing methods for optimizing genetic screens and manipulating the genome of the worm. 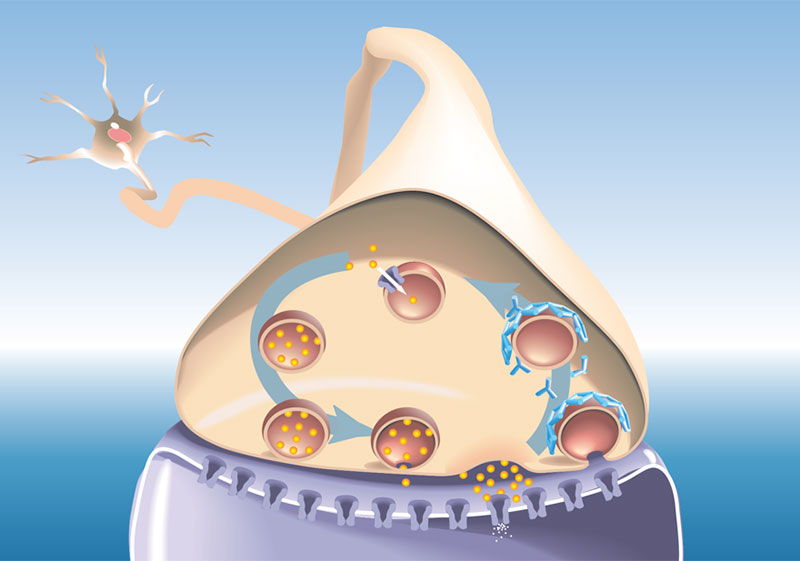 A brain is composed of cells connected to one another at synapses. Our goal is to understand how the proteins work together to form nanomachines in this organelle. Specifically, we would like to understand how synaptic vesicles fuse to release neurotransmitters and how vesicles are regenerated at the synapse to maintain synaptic transmission.

We are dissecting synaptic function in the simplest organism with a well-defined nervous system – the nematode Caenorhabditis elegans. Our strategy is to first identify mutant worms with defects in synaptic proteins. We do this either by forward genetic screens for worm mutants with behavioral defects or by generating directed mutations in known synaptic genes. We then use biochemistry, electrophysiology, fluorescence microscopy and electron microscopy to examine the role of the protein in the synapse from as many angles as we can. Based on inferences from the mutant phenotype, we develop a hypothesis for how the protein functions. Predictions for structural variants are made from these models and tested in transgenic animals. These results can be used as a springboard for studies in other systems, linking biochemical models of protein function and studies of the vertebrate brain.

Our current research can be classified into four categories: neurotransmitters, exocytosis, endocytosis, and genome editing.

Neurotransmitters
My lab was founded on exploring the inhibitory neurotransmitter GABA, starting with the identification of the vesicular GABA transporter. Because the mutant phenotype of this gene was so distinctive we screened for other genes that could be mutated to this phenotype. In addition to inhibitory receptors, we identified two excitatory GABA receptors. These receptors demonstrate previously unappreciated evolutionary plasticity in one of the most well-studied neurotransmitter systems.

Other studies indicate that protons can act as a neurotransmitter. We identified a plasma membrane H+ ion transporter on one cell and a proton-gated ion channel, evolved from an acetylcholine receptor, on a second cell. When calcium levels rise in the first cell and intestinal cell, it releases protons, which are sensed by the second cell, a muscle, which depolarizes and contracts. It is surprising that a subatomic particle – a proton – can act as a fast transmitter in a biological system.

We are continuing to identify other novel molecules that might act as neurotransmitters in C. elegans. For example, we have recently shown that betaine, a molecule similar to acetylcholine, is the physiological ligand for a neurotransmitter receptor on neurons. This receptor is of interest because it is the target of a new class of nematode-killing drugs.

Synaptic Vesicle Exocytosis
Neurotransmitters are released when synaptic vesicles dock to the plasma membrane and then fuse. We have characterized the role of SNAREs, UNC-13, and complexin in synaptic vesicle docking. At the synapse, membrane fusion is driven by the formation of a SNARE complex composed of syntaxin and SNAP-25 on the plasma membrane and synaptobrevin on the vesicle. We generated animals that have neurons completely devoid of syntaxin. These neurons lacked synaptic transmission and lacked docked vesicles, showing that syntaxin is essential for both vesicle docking and fusion. UNC-13 is a protein that binds syntaxin in all nervous systems. We have shown that UNC-13 promotes the open conformation of syntaxin, either directly or indirectly, and thereby allows synaptic vesicles to dock at the membrane. In related experiments, we have demonstrated that the UNC-13-like protein CAPS activates syntaxin during dense-core vesicle docking.

Synaptic Vesicle Endocytosis
Synaptic vesicle proteins and membrane must be recovered after fusing to the synaptic membrane. Previous studies have demonstrated that synaptic vesicles can be regenerated by either clathrin-mediated endocytosis or by kiss-and-run endocytosis. To capture images of endocytosis in a living organism, we combined optogenetics, high-pressure freezing and electron microscopy. Nematodes were modified to express a light-activated ion channel in motor neurons, these animals were flashed with a light and then frozen at different intervals. We observed that membrane was recycled between 30-50 milliseconds after stimulation using this novel mechanism of ultrafast endocytosis. By contrast, clathrin-mediated endocytosis requires 30 seconds and kiss-and-run endocytosis around 2 seconds. 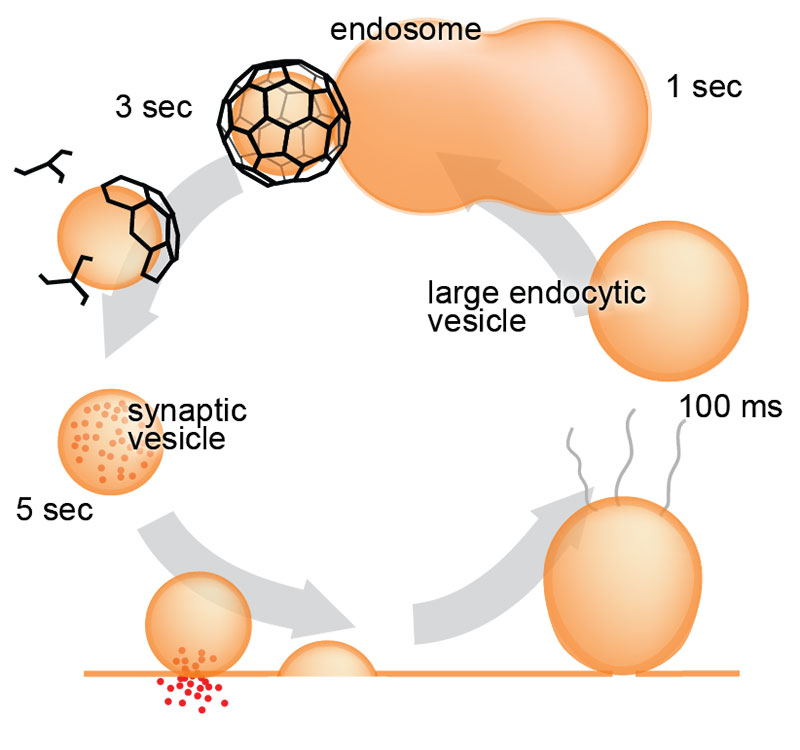 Genome editing
A long-term goal of the lab is to develop tools to manipulate the genome of the worm, to provide the C. elegans community with cutting-edge genetics methodologies. 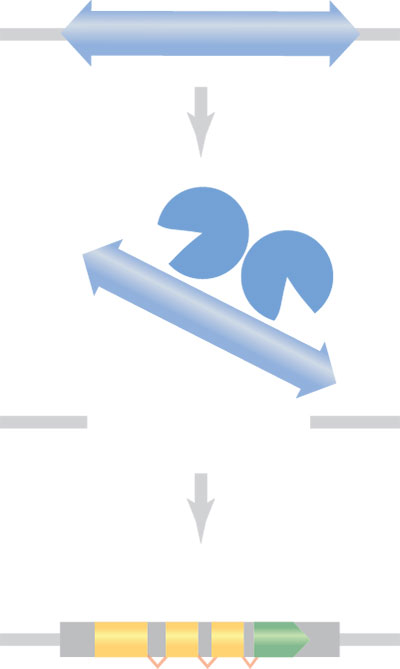 MosSCI. Using standard methods, transgenes in C. elegans are composed of large, repetitive extrachromosomal arrays that are overexpressed or improperly expressed. We mobilized the Drosophila transposon Mos1 in the C. elegans genome. Some of these do not disrupt C. elegans genes and are inserted in chromatin regions that are permissive for specific expression in all cells. Mos1 can be remobilized from these sites and the break healed by insertion of a single copy transgene. This method is called Mos-mediated Single Copy Insertion (MosSCI). A related mechanism can be used to delete genes and is called Mos-mediated Deletion (MosDEL).

miniMos. We designed a recombinant Mos1 transposon that can hop large pieces of heterologous DNA into the genome. Because miniMos is a random rather than homology directed process, miniMos can be used to to randomly probe permissive versus silent regions of the genome. In collaboration with Andrew FIre’s laboratory, we are determining the DNA environments required for expression in the germline. In addition, we are using Mos constructs to randomly trap expression patters from genes using a construct known as MosTrap.

SapTrap. CRISPR can alter any site in the genome with exquisite accuracy and efficiency. However, the molecular biology required to make the essential components, the guide RNA and the DNA repair template can be quite involved. To make the molecular biology capable of high-throughput assembly we developed a method called SapTrap. Using this method the guide RNA expression construct, and repair template with homology arms, tags and regulatory sequences can be generated as a single plasmid in a single step. After cutting the parts with the type II enzyme SapI the correct product is trapped into a single plasmid.

Grants from the National Institutes of Health and National Science Foundation provided partial support for these projects.