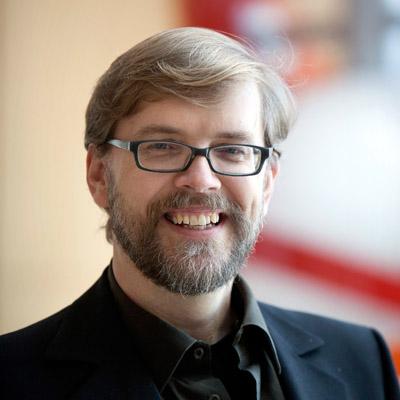 Dr. Mullins is a professor in the Department of Cellular and Molecular Pharmacology at the University of California, San Francisco.

Dyche Mullins studies the assembly and regulation of cytoskeletal networks—collections of molecules used by living cells to move molecular cargo, establish polarity, and propel themselves forward. Understanding how cells construct their internal molecular "skeletons" is key to understanding a wide variety of biological processes and human diseases.

My laboratory pursues answers to fundamental questions in cell biology. In general, we ask how nanometer-sized biological molecules transmit and integrate information across much larger length scales: microns, millimeters, and beyond. In other words, we want to understand how collections of macromolecules work together to establish a common identity: living cells. One way for molecules to establish long-range order is by self-assembling into much larger structures, such as membranes, cell walls, and cytoskeletal polymers. Our main projects focus on the assembly of cytoskeletal polymer networks and the roles they play in prokaryotic and eukaryotic cells.

Amoeboid Cell Migration
Cell migration is important in single-cell biology and is a crucial process in development and cancer metastasis. Despite years of study, the connection between actin filament assembly and amoeboid cell locomotion remains unclear. This, in part, reflects the fact that cell locomotion is not one single process. For years, the canonical view of migration was that of a single sequence of coordinated events: actin-driven membrane protrusion, integrin-mediated leading-edge adhesion, myosin-driven cell body contraction, and force-dependent trailing-edge de-adhesion. Recent work, however, has exploded this simple story, and we now realize that eukaryotic cells use several different mechanisms to crawl. For instance, some cells (e.g., fast-moving leukocytes) can crawl through complex three-dimensional environments independently of integrin. The key to this adhesion-independent motility appears to be spatial confinement: when cells are forced to move through restrictions that are small compared to the size of their nuclei, weak electrostatic interactions give them the purchase required to move forward. My lab uses advanced imaging techniques to observe crawling dynamics of living cells to reveal the complex mechanisms of migration.

Mechanobiochemistry
The mechanical properties of most eukaryotic cells are determined by the actin cytoskeleton. A major challenge to understanding the physical properties of actin networks, however, is that they are dynamic: their assembly and disassembly are integral to their function. At present we know little about how such self-assembling biological materials have evolved to resist and adapt to externally applied forces.

External forces are particularly relevant to dendritic actin networks, generated by the nucleating and cross-linking activity of the Arp2/3 complex, a seven-subunit protein complex that builds cross-linked filament arrays by creating new filaments that branch from the sides of existing filaments. Dendritic actin networks assemble in contact with membranes and exert pushing forces that are generated by the free energy of actin polymerization.

Prokaryotic Cell Biology
The discovery of cytoskeletal filaments in bacteria defined a new frontier in prokaryotic cell biology. My lab focuses particular attention on movement of intracellular cargo driven by assembly of actin-like ParM filaments. We have characterized the assembly properties of ParM polymers, reconstituted DNA segregation from purified components, and described the dynamics of ParM polymers and cargo DNA molecules in vivo.

We identified three properties of ParM that are critical for its ability to segregate DNA: fast spontaneous nucleation, symmetrical elongation, and dynamic instability. Of these, the role of dynamic instability is particularly interesting. It underlies three fundamental features of DNA segregation: (1) It ensures that pairs of plasmids are pushed in opposite directions—in effect, counting plasmids. (2) It promotes search and capture by driving plasmids on forced random walks through the cytoplasm, where they encounter other plasmids. (3) Surprisingly, dynamic instability also provides energy to push plasmids through the cytoplasm.

We are also working to understand the structure of the interface between ParM filaments and their DNA cargo molecules as well as the mechanism of insertional polymerization that enables cargo complexes to convert the free energy of polymerization into useful work. More recently, we have begun comparing the ParM system with other bacterial, actin-based DNA segregation systems to see whether the rules we have outlined are general or simply one of many solutions to this problem.

Nuclear Architecture
Our interest in nuclear actin grew directly out of our work on the Arp2/3 complex, in particular our discovery of a nucleation-promoting factor, JMY. We found that JMY shuttles into and out of the nucleus in response to DNA damage and cytoplasmic actin assembly.

It has been known since the early 1970s that eukaryotic nuclei contain conventional actin, but the function and form of this nuclear actin have been hotly debated. We are developing new tools and techniques to study nuclear actin. Recently, we have found that DNA damage induces formation of nuclear actin filaments. We are studying the assembly and function of these DNA damage–induced nuclear filaments, including whether they alter the mobility of damaged DNA loci or change the rate at which repair factors are recruited to breaks in the DNA.

Additional support for these projects was provided by grants from the National Institutes of Health and the University of California, San Francisco Program for Breakthrough Biomedical Research.