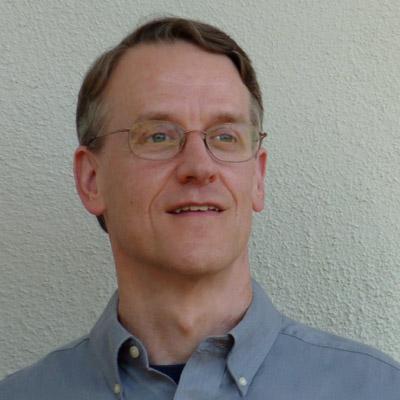 Dr. Kingsley is a professor of developmental biology at Stanford University School of Medicine.

Naturally occurring species show spectacular differences in morphology, physiology, disease susceptibility, and life span. Although the genomes of many organisms have now been completely sequenced, we still know relatively little about the specific DNA sequence changes that underlie interesting evolutionary differences. My laboratory is using a combination of genetic and genomic approaches to identify the detailed molecular mechanisms that control evolutionary change in vertebrates, with a focus on five fundamental questions:

1. Are new evolutionary traits controlled by countless genetic differences of small effect, or by some genetic changes with large effects?

2. What specific genes have changed to produce interesting evolutionary differences seen in nature?

3. What kinds of mutations have occurred in these genes (e.g., dominant or recessive, coding or regulatory, preexisting or de novo)?

4. How predictable is evolution? If you know how evolution has occurred in one species, is it possible to predict the types of genes and mutations that underlie similar traits in other species?

5. How has evolution produced the unique characteristics of humans?

We use a variety of methods in mice, sticklebacks, and humans to study these questions. Mice are often the best system available for asking detailed mechanistic questions in mammals and for testing the phenotypic effects of particular sequence changes seen in other mammals. We have used classical genetics in mice to identify genes controlling formation of bones, patterning of joints, and relative sizes of forelimbs and hindlimbs. Our genetic studies of the mouse short ear and brachypodism genes provided the first genetic evidence that bone morphogenetic proteins (BMPs) play an essential role in formation of both bone and joints, as well as in the repair of bone fractures in adult animals.

Figure 1: Mapping the molecular basis of vertebrate evolution. Dramatic phenotypic differences in sticklebacks have evolved so recently that different populations can still be crossed using in vitro fertilization in the laboratory. Genetic linkage mapping makes it possible to identify the chromosome regions that have the biggest effects on evolutionary change. Key regions can then be further mapped and sequenced, in order to identify the genes and mutations that control major differences in the starting populations. To verify that the correct gene has been identified by this approach, we re-introduce the relevant DNA sequences back into live animals, and test whether we can rescue or re-create the same traits that have evolved in nature (see, for example, Chan, Y.F., et al. 2010 Science, identifying regulatory deletions in the Pitx1 locus that control repeated evolution of pelvic hindfin reduction in sticklebacks). Image: David Kingsley
Figure 2: Adapting by similar genetic mechanisms in fish and humans. Many traits evolved over and over again when sticklebacks migrated into the new freshwater lakes and streams generated by widespread glacier melting at the end of the last ice age. Our genetic studies of skin color show that repeated lightening of sticklebacks in has occurred by repeated selection of a regulatory variant in the Stem Cell Factor/KITLG gene, which encodes an essential signaling molecule known to play a key role in migration and proliferation of pigment cells, blood cells, and germ cell precursors. The same gene also shows one of the strongest signatures of recent positive selection in the human genome, with a variant regulatory allele rising to very high frequency during migration of humans into Europe and Asia. Similar mechanisms are thus re-used during both fish and human evolution, a principle we are now using to search for the molecular basis of many other interesting traits. Image: David Kingsley. See also Miller, C.T. et al. 2007. Cell 131:1179–1189.

BMPs have the remarkable ability to stimulate the entire process of cartilage and bone formation when expressed at new sites in mammals. Since BMPs are the key signals used by vertebrates to initiate skeletal formation in vivo, much of the pattern of the skeleton may be encoded by the regulatory sequences that lay out the expression of BMPs in specific patterns during embryonic development. We have used genetics and genomics to identify a remarkable array of long-distance, modular regulatory elements surrounding the Bmp5, Gdf5, and Gdf6 genes. These sequences correspond to individual "anatomy" elements that help control the size, shape, and number of individual bones and joints. We have also identified separate regulatory enhancers that cause BMPs to be re-expressed at sites of injury in adulthood. Further study of BMP regulatory elements should provide a detailed picture of the molecular mechanisms that control the formation, patterning, and repair of the vertebrate skeleton.

Stickleback fish offer an unusually powerful system for studying the molecular basis of evolutionary change in natural environments. These fish have undergone one of the most recent and dramatic evolutionary radiations on earth, colonizing countless new freshwater lake and streams generated by widespread melting of glaciers at the end of the last ice age. Many freshwater sticklebacks have evolved dramatic differences in morphology, physiology, and behavior in the last 15,000 years. Although often reproductively isolated in nature, recently evolved stickleback species can still be crossed using artificial fertilization in the laboratory. This provides a unique opportunity to identify the key chromosome regions, genes, and mutations that control repeated evolution of new traits and new species under a full range of fitness constraints in the wild.

The widespread evolution of sticklebacks also offers an opportunity to test whether the same or different genes are used when the same traits evolve in widely separated locations. Genetic mapping, complementation tests, and gene expression studies suggest that similar genetic mechanisms are used when the same traits are selected in multiple populations around the world. How far might such reuse of particular genes extend? Our recent studies suggest that the genes underlying major morphological change in sticklebacks are also reused when similar morphological changes evolve even in distantly related animals. Thus, we find that pelvic reduction in marine mammals shows the same morphological features previously associated with Pitx1-mediated pelvic reduction in both mice and sticklebacks. And the genes and mechanisms that we first identified in mice or sticklebacks also control major differences in human morphology, human disease incidence, and differences in skin and hair color in millions of people around the world.

Building on this work, we have also begun several innovative projects to identify genomic mechanisms that underlie the evolution of key human traits. These studies combine human-specific sequence changes detectable by comparative genome analysis (with Gill Bejerano's lab at Stanford University), patterns of evolutionary change we have previously learned in sticklebacks, and functional tests of human-specific sequence changes using mouse models. We are still a long way from knowing the genomic mechanisms that have made us human. We believe, however, that the molecular mechanisms contributing to human-specific skeletal and brain traits are becoming a tractable problem, and that progress in this area will lead to important new insights into both human health and human disease.