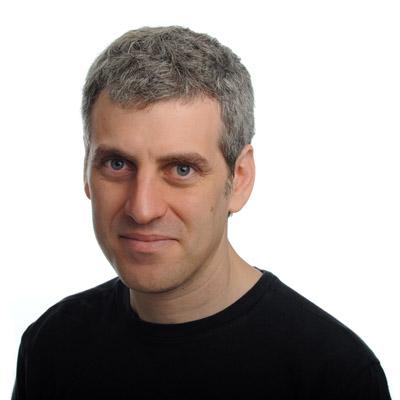 Dr. Stern is a group leader at the Janelia Research Campus. From 2008 to 2011, he was an HHMI investigator at Princeton University.

David Stern studies how individual genetic changes cause differences in the appearance and behavior of closely related species.

The sweep of biological diversity—from whales to squid, ferns to toadstools—can give the impression that evolution involves dramatic changes in the appearance and behavior of organisms. In fact, these large-scale differences reflect the accumulation of far more subtle changes over vast periods of time. These small-scale changes hold the key to understanding the evolution of larger differences between species. Recent progress with several model species now allows detailed analysis of these individual evolutionary events. Our lab uses fruit fly species closely related to the model species Drosophila melanogaster to pursue these problems.

The Evolution of Trichome Patterns
To the casual observer, most of the 1,500 species of fruit flies look the same. Even to an entomologist, closely related fruit fly species look similar. However, closely related species often differ subtly in physical appearance, smell different—to each other, and often display different behavior. My lab has made considerable progress dissecting the genetic causes of species differences by focusing on the details. Our most advanced project involves study of a difference in the distribution of small hair-like projections on the back of the first-instar larva (fruit flies grow through three larval stages, or instars, before metamorphosing into an adult).

First-instar larvae of most fruit fly species have hairy backs (Figure 1). We have discovered that some species, such as D. sechellia, have a nearly naked back (Figure 2). From the perspective of a fruit fly larva, this is reminiscent of the difference in hairiness between chimpanzees and humans. We have discovered that the evolution of "nakedness" in D. sechellia was caused by evolution of a single gene called shavenbaby. The shavenbaby gene got its name because mutations that eliminate the function of this gene remove almost all of the "hairs" on larvae. The D. sechellia larvae aren't quite as naked as larvae that completely lack shavenbaby function. This indicates that evolution of the naked larvae involved subtle changes in the function of this gene and not complete elimination of gene function.

We have recently discovered that at least three mutations altered the way the shavenbaby gene is expressed in embryos. Each mutation alters gene expression in specific ways by altering the activity of each of three enhancer elements that regulate transcription of the shavenbaby gene (Figure 3). The three enhancer elements are located far apart on the chromosome. All of the mutations alter the pattern of shavenbaby expression, and none alter the structure of the protein. The surprising complexity of the evolutionary causes of morphological evolution, even in the case of these relatively simple hair-like organs, suggests that evolution of more complex features requires a huge number of mutational changes, each with very specific effects.

Perhaps the most surprising feature of our findings is that all of the mutations altering the pattern of these hair-like projections altered the function of the same gene, shavenbaby. This is surprising because it is widely recognized that the development of any part of an organism requires the activity of at least hundreds of genes.

Why, then, have all of the evolutionarily relevant changes occurred at the shavenbaby gene? We believe this is evidence that shavenbaby is an evolutionary "hot spot" for larval hairiness. We suspect that the structure of the genetic network that generates these hairs favors mutations at shavenbaby. Shavenbaby integrates multiple spatial and temporal signals and provides an "on" or "off" transcriptional response. When shavenbaby is expressed, it then activates transcription of a large battery of genes that build the hair-like projections. When shavenbaby transcription is repressed, these downstream genes are not activated and the cuticle remains naked. Shavenbaby therefore acts like a switch. This is similar to the way a light switch works to turn a light bulb on and off. There are many ways to turn the lights off in a room. One might turn off the power-generating station, cut the power lines to a house, flip the circuit breaker, flip the switch, or break the light bulbs with a hammer. Clearly, of all of the possible options, flipping the switch in the room is both the most specific and the most reversible way to turn a light off. Shavenbaby is this light switch for larval hairs. This puts shavenbaby in an evolutionarily privileged position in the regulatory network (Figure 4). In flies, we expect that shavenbaby should frequently accumulate mutations that alter the pattern of these hair-like projections. Evidence from other species, discussed in the next section, supports this hypothesis.

Figure 4: The regulatory network governing the development of microtrichiae illustrates that shavenbaby sits at the nexus of upstream patterning information and downstream differentiation gene batteries. The location of shavenbaby in this position may explain why shavenbaby is a "hot spot" for evolution of microtrichia patterning. Adapted from Stern, D.L., and Orgogozo, V. 2008. Evolution 62:2155-77.

Parallel Evolution
We have also studied "naked" larvae, similar to those found in D. sechellia, in a group of flies closely related to D. virilis. The lineage giving rise to these flies diverged from the lineage giving rise to D. melanogaster and D. sechellia at least 40 million years ago. We can, therefore, be confident that the evolution of naked larvae in the D. virilis group represents an evolutionary event independent of the evolution of naked larvae in D. sechellia.

We have found that changes in the expression of shavenbaby appear to have caused evolution of naked larvae in multiple species of the D. virilis group. This is a striking case of parallel evolution, or the independent evolution of similar changes in appearance by evolution of the same molecular mechanisms. These observations strongly support the hypothesis that shavenbaby is a favored target for evolutionary changes in larval hairiness. This, in turn, implies that evolution at the genetic level is predictable, at least to some extent.

We are now testing whether the genetic changes causing naked larvae in different species involve the same kinds of molecular changes at the shavenbaby locus. Since the D. virilis and D. melanogaster species groups diverged so long ago, it is highly unlikely that precisely the same DNA changes caused evolution of naked larvae in these two cases. Instead, we are asking two questions. First, is transcription of the shavenbaby gene regulated through a conserved set of enhancer elements? And, second, have these elements evolved in similar ways to generate naked larvae in the different species?