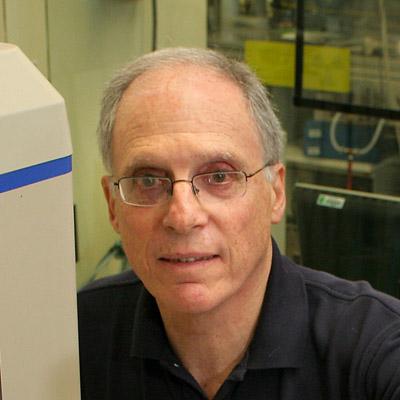 Dr. Eisenberg is Paul D. Boyer Professor of Biochemistry and Molecular Biology at the University of California, Los Angeles.

The Structure of Amyloid and Prions
Amyloid and prion diseases are diseases of protein aggregation in which a normal, functional protein converts to an abnormal, aggregated protein. The systemic amyloid diseases, such as dialysis-related amyloidosis, are apparently caused by the accumulation of fibers until organs fail. The neurodegenerative amyloid diseases, such as Alzheimer's, Parkinson's, amyotrophic lateral sclerosis (ALS), and the prion conditions, seem to be caused by smaller oligomers, intermediate in size between monomers and fibers. Our goals are to understand the general features of the conversion to the amyloid state, why some of the diseases are transmissible between organisms and others not, what the structures of the toxic units are, and how they exert their toxic actions.

In 2005, we determined the first atomic-level structure for the spine of an amyloid fiber. This structure shows that the spine consists of two parallel beta sheets, packed across a tight, dry interface that we call a steric zipper. The structure of the spine explains the stability of amyloid, gives hints about the conversion process, and suggests why some proteins form amyloid while others do not. Since 2005, we have determined some 90 amyloid spines from 15 disease-related proteins, using a combination of bioinformatics and structural tools.

Figure 1: Ribbon diagrams of the structures of RNase A. a, The monomer; b, the minor dimer; c, the major dimer; and d, a model of a trimer of a produced by combining panels b and c. The N and C termini are labeled. In the minor dimer, the N-terminal ahelices are swapped; in the major dimer, the C-terminal b strands are swapped. The closed interfaces are the interface between the blue segment and the green core structure, and the interface between the red segment and the green core structure in a, which are also found in the minor dimer (b) and the major dimer (c), respectively. The open interface in the minor dimer lies between the green and the blue strands in the middle of the b sheet in b, and the open interface in the major dimer lies between the red and the green segments in the center of the molecule in c. These open interfaces do not exist in a. The core domain of the green subunit in each molecule has the same orientation. In the model of the trimer, domain swapping takes place at both the N and C termini. The figure was created using Raster3D. From Liu, Y. et al. 2001. Nature Structural Biology 8:211–214. © 2001 Nature Publishing Group.
Figure 2: Structure of the hinge loops of the RNase A major dimer, with implications for amyloid fiber formation. a, Structure of the open interface of the RNase A major dimer, showing the atomic structure for residues 110–117 of both molecules of the dimer. These segments correspond to the central portion of Figure 1. Carbon, nitrogen, and oxygen atoms are in yellow, blue, and red, respectively. Hydrogen bonds are shown as purple dots. Three hydrogen bonds are formed between Asn 113 residues in the two hinge loops. The atoms involved in these three hydrogen bonds are labeled. The figure is plotted with SETOR. b, Speculative three-dimensional domain-swapping, polar-zipper model for formation of aggregates, with polyamide expansion loops. With the expansion of polyglutamine (PolyGln) in the hinge loop between two domains, a fluctuation that breaks the noncovalent bonds between the two domains exposes the polyglutamine loop as well as the two halves of the closed interface. The polyamide segment is able to form a b sheet, with three hydrogen bonds per residue pair, as observed for residue 113 in a. This stabilized sheet grows as additional polyamide b strands are added, defining the fiber axis perpendicular to the b strands, shown at the right. The sheet may be further stabilized by three-dimensional domain swapping formed by additional closed interfaces at the two sides of the sheet. A less-stable sheet could be formed by other (nonpolyamide) sequences and could account for the observation that proteins that undergo transition to the amyloid state exhibit enhanced b structure. From Liu, Y. et al. 2001. Nature Structural Biology 8:211–214. © 2001 Nature Publishing Group.

Toxic Amyloid Oligomers
Amyloid fibers were long suspected to be the disease agents of Alzheimer's, Parkinson's, and the prion conditions, but evidence suggests that smaller, often transient and polymorphic oligomers are the toxic entities. Recently we identified a segment of the amyloid-forming protein alphaB crystallin, which forms an oligomeric complex exhibiting properties of other amyloid oligomers: beta-sheetrich structure, cytotoxicity, and recognition by an oligomer-specific antibody. The x-rayderived atomic structure of the oligomer reveals a cylindrical barrel, formed from six antiparallel protein strands, that we term a cylindrin. Cylindrins offer models for the hitherto elusive structures of amyloid oligomers, and are currently being studied in our laboratory with biochemical, cellular, structural, and bioinformatics tools.

This work has also been supported by grants from the Department of Energy, the National Institutes of Health, and the National Science Foundation.